What is the difference in electrical need between two-knob and four-knob induction ovens?

Maybe this isn't really DIY, but I would like to know a little bit more about it so that I can do some of my own comparing and make sure I am making the right decision finally. Here is a photo of my future flat, but with the current tenant's oven & stovetop: 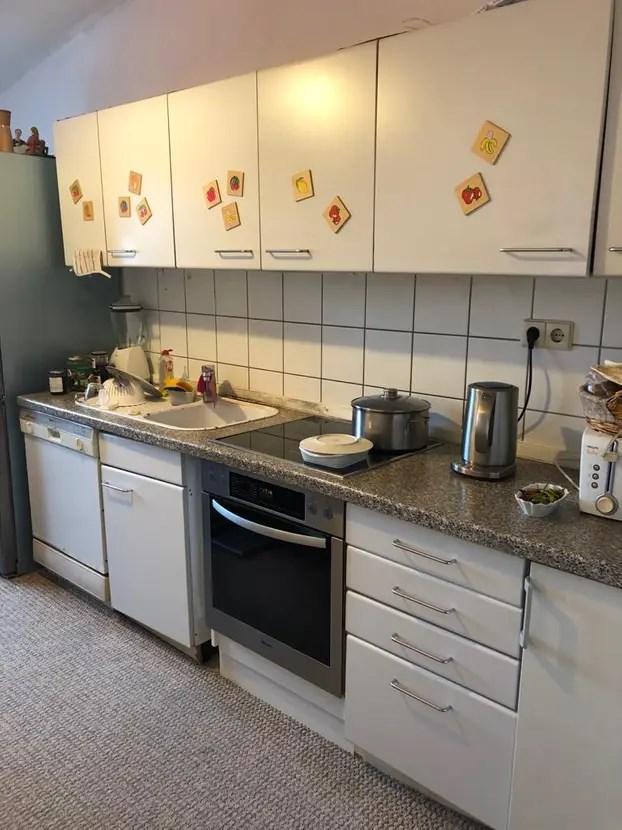 I found a combo that I liked, mostly because it was an induction stovetop. But upon showing the picture to the guy at the store, he said that the model would not be compatible, because of a difference in the electric wiring. I don't remember exactly what model it was (I didn't bother writing it down since it was apparently incompatible), but he explained it to me that, effectively, the oven in the apartment has 4 knobs on the oven which control the stovetop, and the model I was looking at only had two knobs (for the oven itself), and then the controls for the cooktop were on the cooktop itself. He said it was possible to install the model I was looking at, but it would be significantly more expensive because they would have to re-do a lot of the electrics.

He also told me that there are indeed induction models with the "4 knobs on the oven" setup, but that they are also significantly more expensive.

Since this is in Germany, I would assume the following (this is a very common situation):

Well, on the one hand that is (to me) an odd setup (since the counter continues in front of the cooktop, the cooktop is drop-in, but dropped in on top of the oven and apparently connected to it, an arrangement that's more commonly seen in a slide in or freestanding "range" as we call an oven/cooktop combined in one appliance locally. Probably not your local terms...) So it's a weird hybrid I've never seen, but I don't make any claims to have seen every cooking appliance combination the world has to offer, at all.

Anyway, what the "guy at the store" is assuming to be true appears to be that a single circuit is feeding this combined oven/stovetop, and a truly separate stovetop and oven would use two circuits.

However, you (and the guy at the store) don't actually know what's back there until you can examine the wiring in person. "Appliance store guy" is making a reasonable guess based on combined appliance.

Contact the management of the building and ask them what kind of electric service is present for the cooktop and oven.

Not the answer you're looking for? Browse other questions tagged electrical oven stove or ask your own question.

3
What amp breaker for 20 Amp electrical oven and 40 Amp electrical range on same circuit
3
Why would the stove and broiler work, but not the oven?
4
Stove and oven on same circuit?
3
Height of cabinet for induction cooktop
0
Can you ID this stove/cooker?
1
Oven has power, preheat light is off, but no heat
0
Frigidaire oven smells smoky and turned itself on to bake. Safe to use cook top?
3
Tankless water heater causes magnets (ceiling fans, induction oven) to hum while actively heating water
1
I Did Something Really Dumb With My Oven, Suggestions? - KitchenAid kebs107sss00 Woes