Is a spade bit the right tool for burying a 3/8″ bolt in plywood?

Suddenly the two hardware stores near me have all sorts of varieties of spade bit sets from multiple manufacturers displayed in prominent aisles, which makes me wonder whether that's the reason I am tempted to use a spade bit for this job, or else spade bits have always been there and it's only now I'm noticing.

A quick summary of the project:

I am hanging a chin-up bar on drywall, as shown in the picture below. From two previous questions on this site I know that: 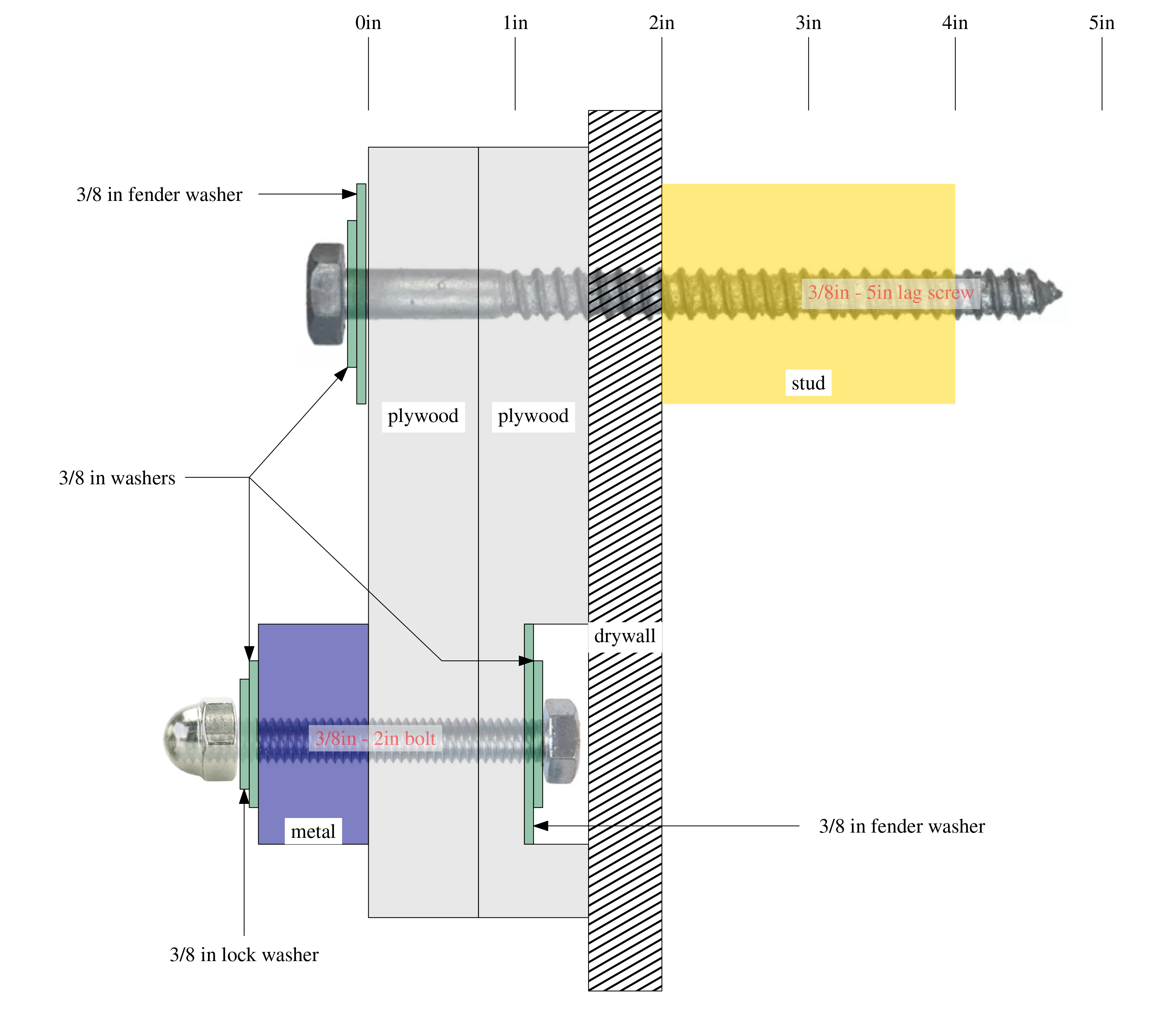 What is the right tool for burying a 3/8″ bolt, along with washer and fender washer, in plywood? The lag bolt appears in the bottom half of the image. Also, my hunch is that I do not need to glue the two sheets of 3/4″ plywood together; would you care to comment?

Regardless of whether I would use a spade bit or something else (a sawtooth bit? a hand chisel?), it's difficult to measure this sort of thing at the outset (at least using an amateur's handheld drill). Is my guess correct that I need to do this by trial and error: shave a bit, put the bolt and two washers; shave some more; until the head of the bolt no longer protrudes?

If you are following the previous two questions and the present one very closely, you will notice that I am no longer discussing the need for three kinds of attachments (A, B, and C in the previous two questions), but only two, as the picture above shows. I asked based on the posted dimensions from customers' reviews and expected that the manufacturer had cleverly separated the holes by exactly 16″, the common dimension separating studs. Since then the chin-up bar arrived in the mail, and the separation is actually 52 cm (~20.5″). As a product meant for worldwide consumption, this makes sense, and, ironically, it simplifies the job on my side.

I didn't know this when I asked the question, but it turns out that in this project I don't have the luxury of choosing whether to bury the bolt and washers in the plywood. That decision is forced by the available bolt lengths. The 3/8″ bolts at the largest chain of stores are available in only 2″, 2 1/4″, 2 1/2″, and 3″ length. Since I'm going with acorn nuts to avoid getting cut from the exposed bolt, I need to use 2 1/2″ bolt and to bury them. At the unavailable 2 3/4″ size (as luck would have it) I could have drilled a hole in the drywall for the bolt head and kept the plywood intact.

In terms of measuring the depth, get your bolt plus washer etc and line the face of the washer that touches the wood plus the bolt head up against the cutting part of the spade, then use some electrical tape wrapped around the bit to mark where the face of the bolt head is. Now just drill til the tape is level with the surface of the work. The ply will compress slightly when you bolt it all up too..

By the way, if the diagram is a vertical section, I'd hesitate to mount it on the wall in the way you depict in the diagram - if the yellow square is a horizontal wood between vertical studs, it's asking a lot for drywall to resist being broken by hanging a significant weight (a person?) on anything attached to the lower bolt. The downwards force of the weight will server to try and rotate the whole diagram in an anti-clockwise direction, smashing the drywall. I'd mount your proposed bracket in a vertical stud so that the stud takes the load and resists the twisting, not the drywall

I like using Forstner bits for jobs like this vs. spade bits. They cost a bit more but they make a much cleaner hole and don't have a tendency to tear or split the wood like spade bits do.

Most hardware and home center stores have them these days.

I would use a structural screw rather than a lag bolt. Lag bolts are yesteryear's technology. Aside from being stronger and not requiring pilot holes, structural screws have heads that will bury themselves in the wood without the need for washer or drilling a recess with a spade or forstner bit.

If I understand your OP correctly though, the metal frame you currently ahve does not allow for mounting on 16" centers. I consider this a defective design for the American market and would not use it. I'd simply get a pullup bar designed for mounting on 16" studs. Then put wood blocking on top of the drywall (to prevent crushing the drywall) and then mount the metal pullup bar frame through the blocking and into the wall studs at 16" on center.

I've attached a photo showing a Bora lumber rack designed for carrying very heavy loads of lumber on a wall. As you can see, the application is very similar to installing a metal frame pullup bar. I have installed this lumber rack in my workshop with structural screws into the wall framing. I've attached a photo stolen from Amazon though. The photo shows a structural screw holding the metal frame to the wall stud. 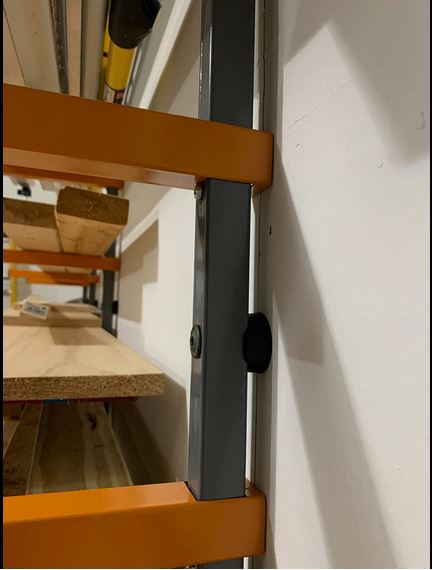 I'd use a spade bit because a forstner/sawtooth bit is a lot more expensive, and just produces a cleaner cutout that you don't need. A spade bit is a perfect way to produce a flat rough cutout.

Yes, go a tiny bit at a time til you can fit the two washers in the hole without their protruding. You don't have to totally bury the back of the bolt in the plywood. Just the washers. The end of the bolt will easily get driven into the drywall when you drive the boards in with the big lag screws. Or, as suggested in a comment, just cut a hole in the drywall and don't countersink the bolts in the wood at all.

You should glue the boards together and trim them flush and square if necessary after gluing. It will look nicer. The bolts should have a tiny amount of play in the holes you drill through the plywood, so the two boards might become slightly misaligned when you tighten things down if they aren't glued. It'll just look bad.

Not the answer you're looking for? Browse other questions tagged plywood bolts drill-bit or ask your own question.

2
Can a chin-up bar be supported by just two of the four intended mounting points?
0
Which nut and bolt to attach wood to metal?

16
What is this kind of security bolt head called, and how can I remove it?
3
Proper way to install double-layer of subfloor?
0
Building a dock ramp for a dog
4
Plywood plate for mounting to wall
0
Trying to find correct bolt for ceiling fan electrical box
0
Which nut and bolt to attach wood to metal?
3
Fixing sheet material together
1
What diamond drill bit size is recommended for 1/2" pipes?