Light box with one black, a two-black-one-red bundle, and a three-white bundle connecting to fixture with one black and one white

I swapping a fixture for cosmetic purposes. The old fixture (installed before I was here) has three indistinguishable clear-wrapped wires and a grounding wire.

The wiring in the ceiling is confusing me a lot - I have a bundle of two black and a red, a bundle of three whites, and another lone black wire: 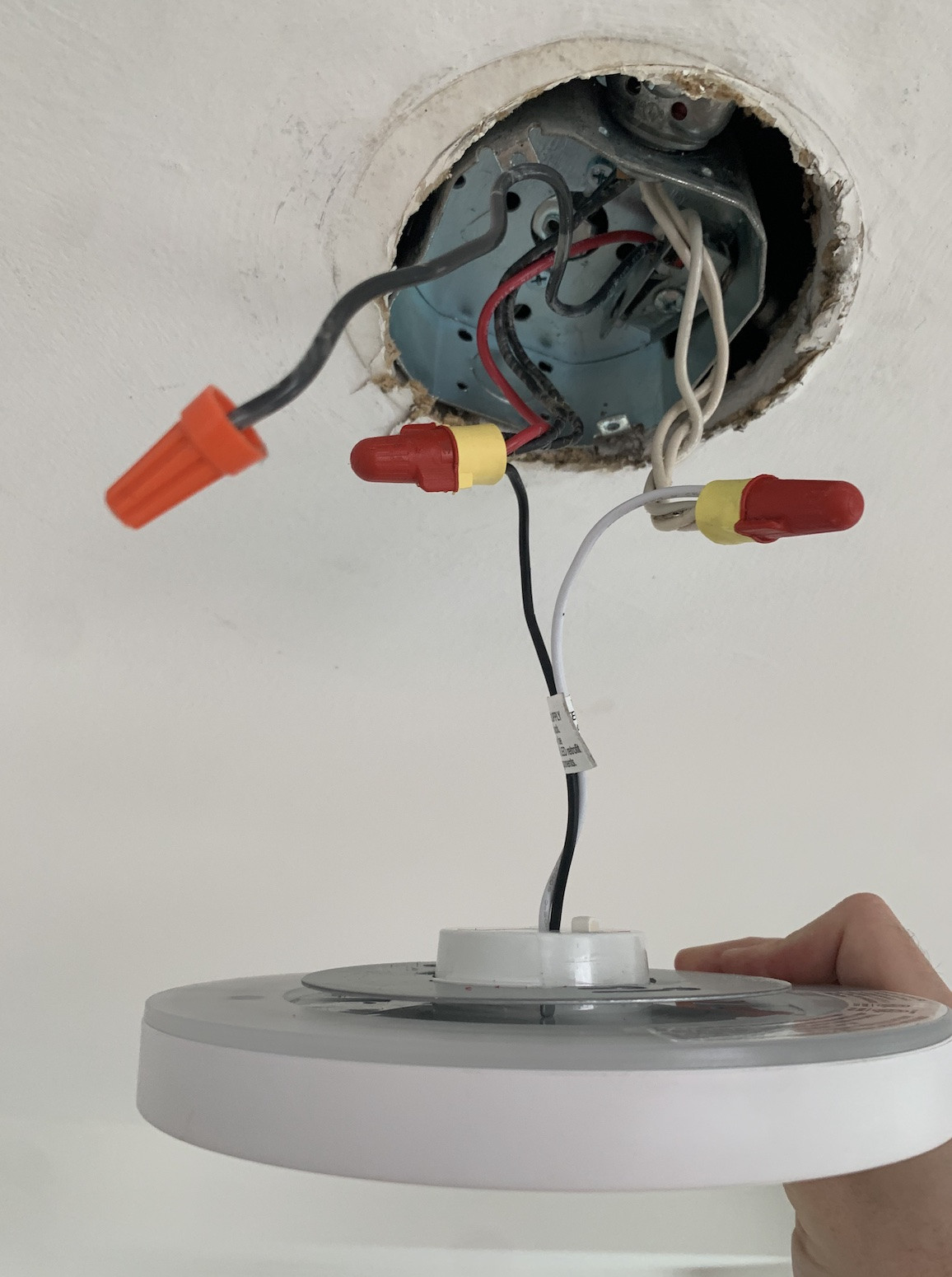 Going off of the solution here, I connected white to white, and then black to the black-and-red bundle, and capped the lone black wire. When I kicked power on, the light always stays on, ignoring the switch.

I'm not sure where to go next. I would try just connecting to the red as the link said, but I'm confused how all of this worked with the previous light fixture, and why the two blacks are bundled with the red. This is my first install, so I want to be sure I don't do anything dangerous.

EDIT 1: adding a picture of previous fixture wiring as requested for clarity: 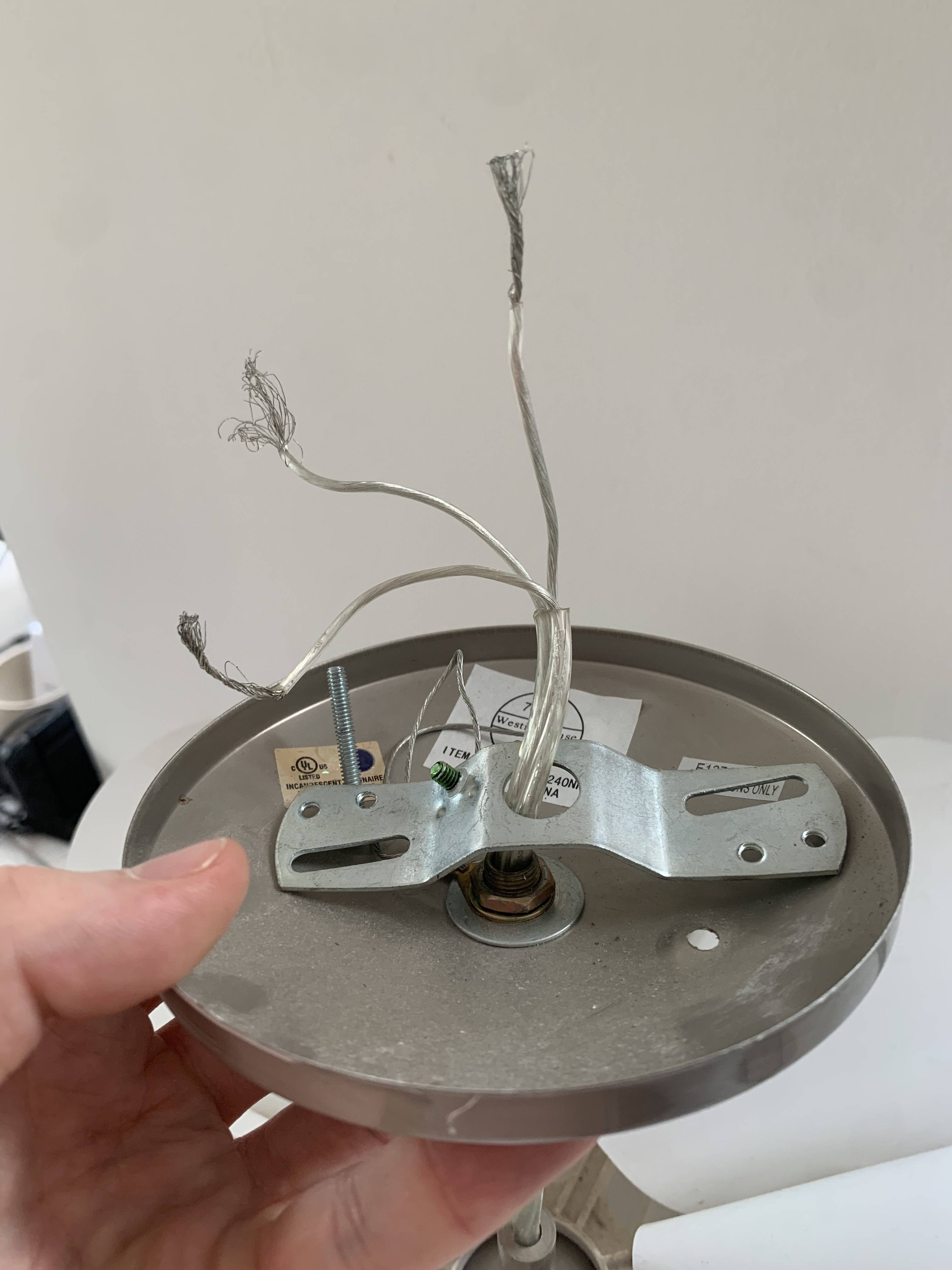 One wire was attached to one of each capped bundle in the previous picture.

EDIT 2 adding picture of full previous fixture and closeup of it's make. 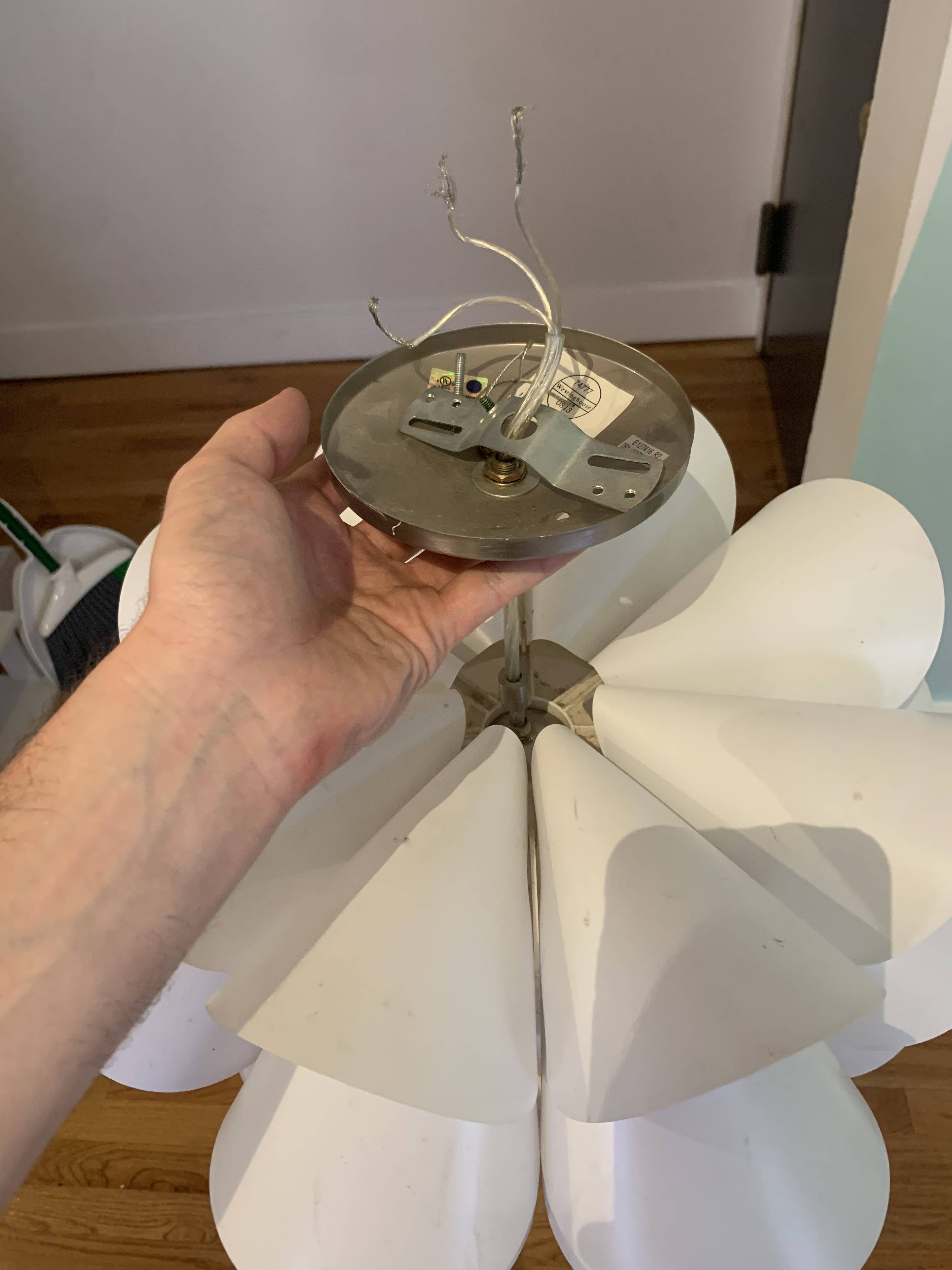 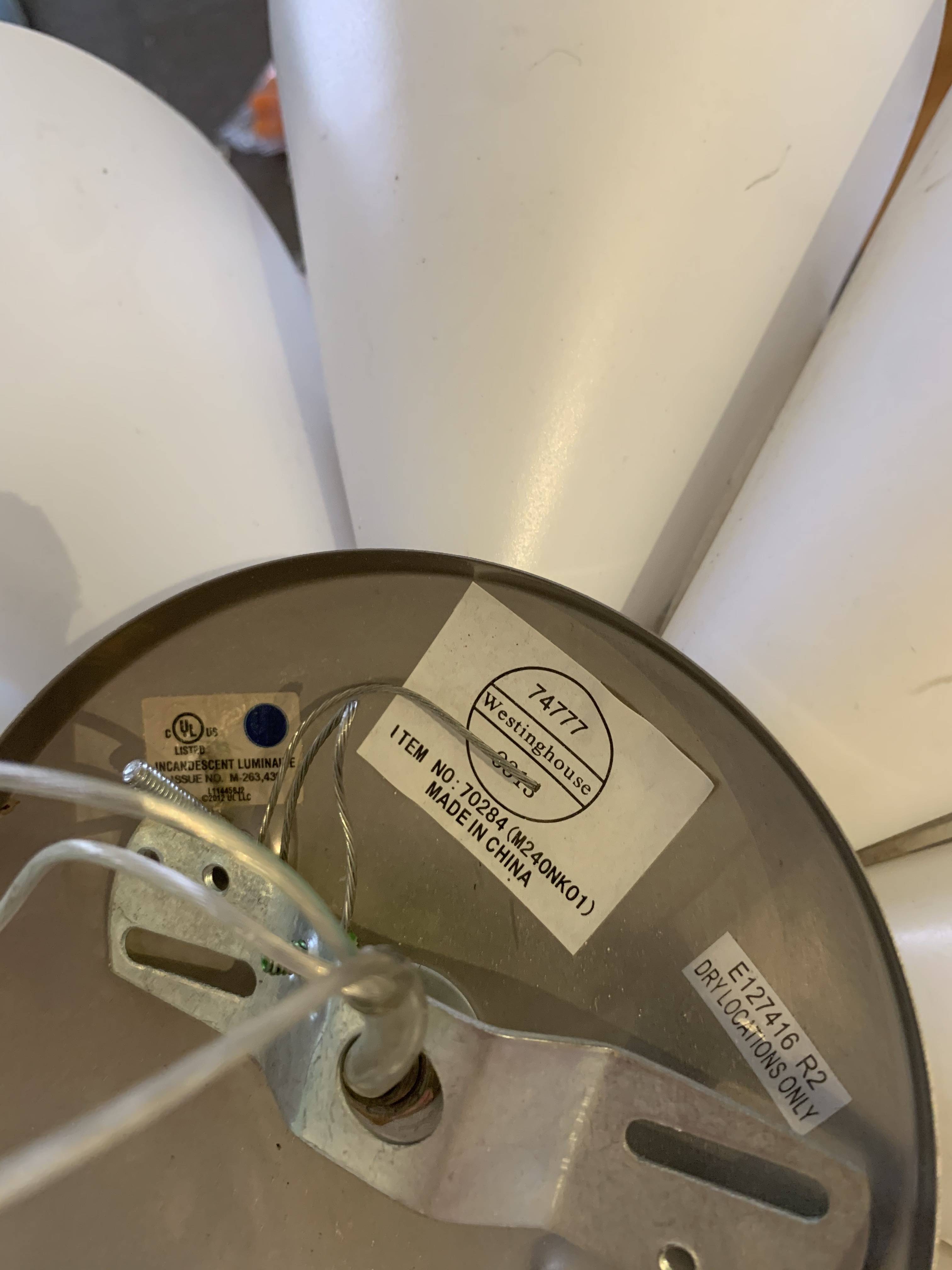 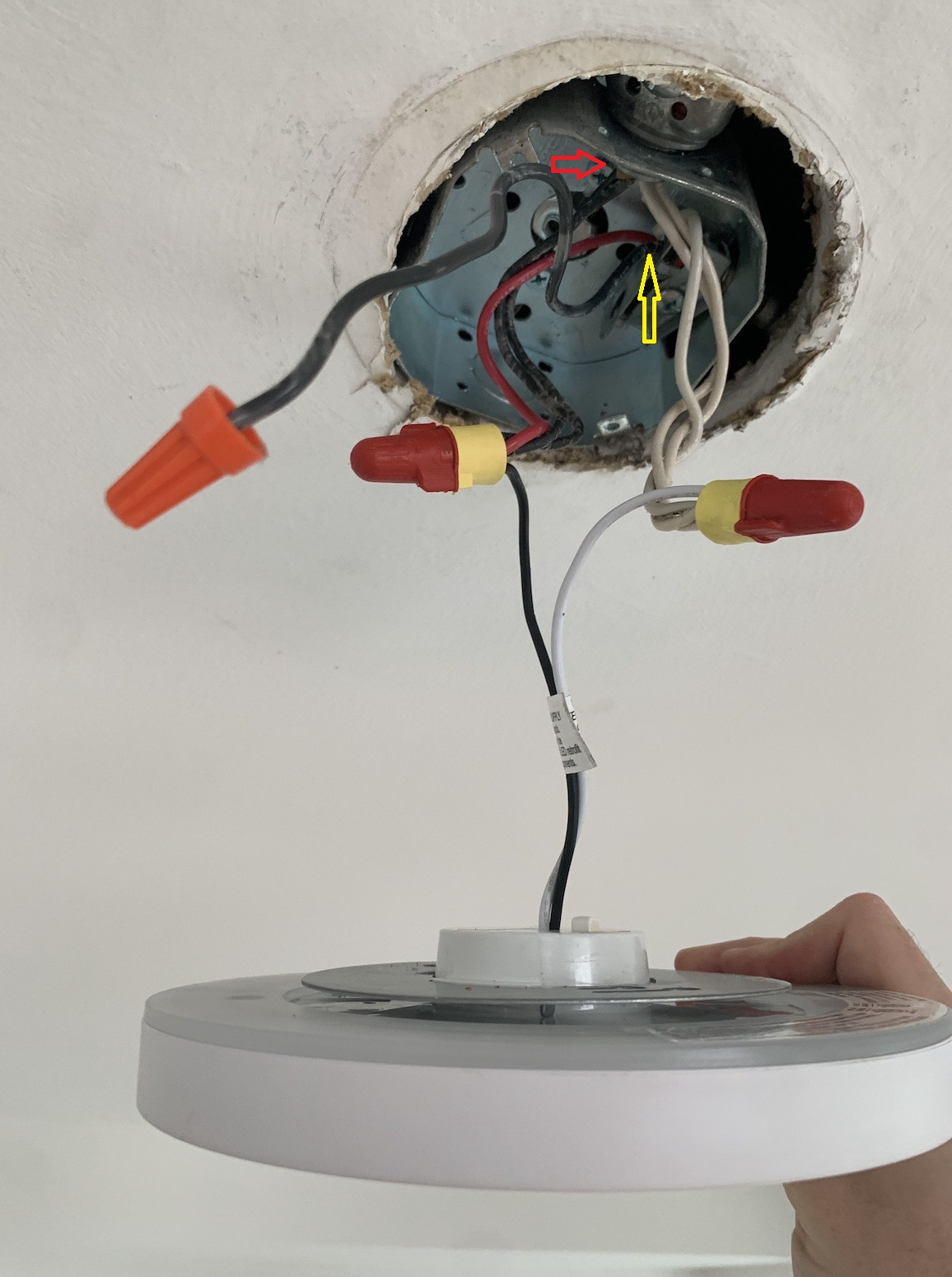 First, look at the wires coming in at the red arrow. This appears to be a pair coming in from the panel, and a second pair, spliced into the box, carrying on to another outlet or light. This is a pretty common scenario. Also, the fact that your incorrectly attached fixture is always on suggests that this is so.

Now look at the yellow arrow. This is a RBW trio. Usually, the black is wired in with the other blacks, down to the switch, and the red comes back as a switched hot.

I believe that the red wire and the single black were swapped at some stage. I think the black should be bundled with the others, and the red should be on its own. (I.E. Convention is that blacks are always hot and red are switched hot for this type of install)

TESTING:
Get a non-contact voltage tester. The black-red bundle should be hot. The red should be hot on one switch position, and no voltage in the other.

Fixing it: If the above tests pass,
Turn the power off at the breaker (and check it!!!)

Separate out the red from the bundle and attach the black to the bundle.
Leave the red as the single wire. (Thus abiding by the convention and not surprising future you.)

The old fixture appears to have "three indistinguishable clear-wrapped wires", but in fact there will be some means of discerning the function of each wire on the insulation. Unfortunately this is not as straightforward as simply using colored wires, and this has often led to fixtures being installed incorrectly (note that the light will still work when wired backwards but is an electrocution risk). With that in mind, I would ignore how the old fixture wires were hooked up to the wires in the ceiling box.

You don't need to know this since you are removing the clear-wired fixture, but to be thorough, here is how to differentiate the seemingly identical clear wires: sometimes a wire's insulation will have a slight texture on it and this indicates neutral. Other times there will be a stripe along the length of the wire's insulation and this also indicates neutral. And sometimes the conductors themselves are different colors (copper = hot and silver = neutral), but that is not the case in your example.

You can discern which wires are always hot and which are switched in the ceiling box by using a non-contact voltage tester and testing each individual wire with the switch both on and off. When you find the switched wire, you should connect it to the fixture's black wire.

Not the answer you're looking for? Browse other questions tagged electrical wiring lighting light-fixture installation or ask your own question.