Is there a difference between incandescent and LED bulbs in terms of a fixtures' "max wattage"?

I was surprised to see this label affixed that specified a MAX of a 60W incandescent or 9.5W LED bulb: 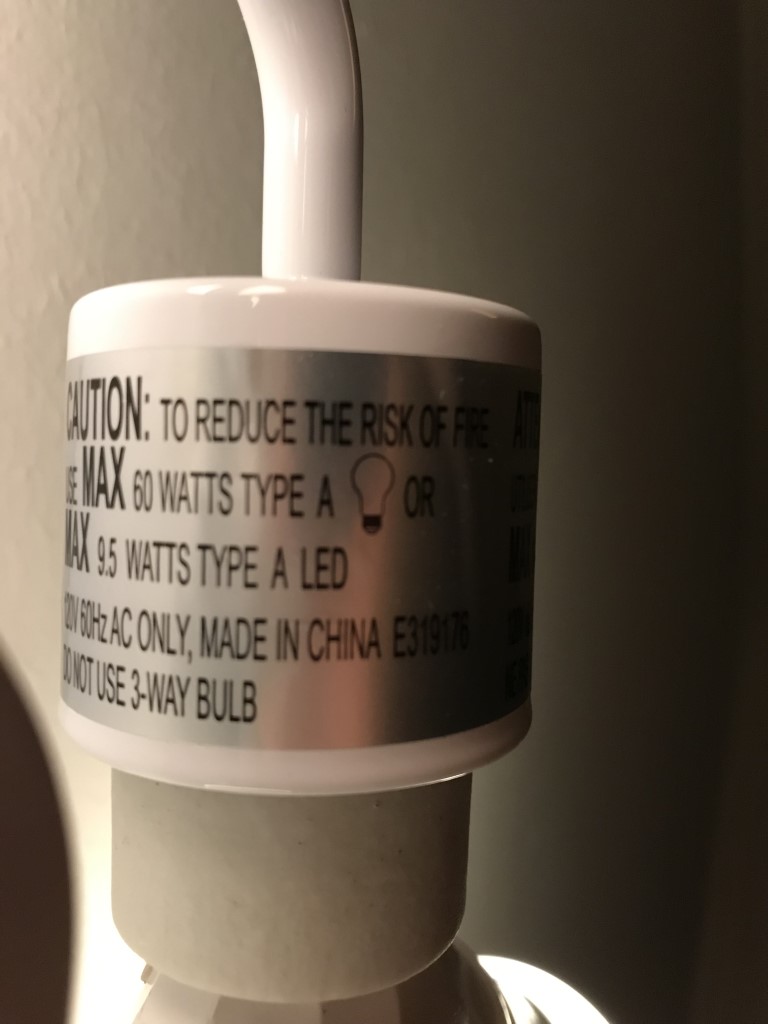 I am used to seeing a label that specifies the max wattage, but I have been under the impression that a fixture rated for a 60W incandescent bulb could accept up to 60W (actual, not equivalent) of any bulb type, including (hypothetically) a 60W LED. In other words, I thought the max wattage was a limitation on the fixture's ability to dissipate heat. This is the first time I've seen a label specify such a low wattage for an LED bulb.

Similar questions have been asked before, such as:

Can I use a 15w LED bulb in a fixture that says max 40w incandescent or 11w CFL?

But the answers to these questions contradict the label in question here; the answers are in line with what I posted above (i.e. the max wattage is a limitation on heat output).

The only explanation I can come up with is that the label is not intended to save me from starting a fire, but rather trying to save me from killing LED bulbs in the flush-mount (enclosed) fixture where more than 9.5W of heat would reduce the life of the LED bulb.

Probably just playing it safe. The issue is almost certainly preventing fire from overheating. The catch is there are two types of overheating:

This is, essentially, Watts in, BTUs out. Some power comes out as light, but for practical purposes you can just look at the total Watts. 60 is obviously a lot more than 9.5 - with respect to total heat, the maximum power should be independent of bulb type.

An incandescent bulb produces heat in the large glass globe. The heat exits in the same way as the light - all directions.

An LED or CFL bulb produces heat primarily in the base. This is a very compact area and, due to insulation for electrical safety, it doesn't conduct heat as well as the open air around the glass of an incandescent bulb. As a result, there is a concern about the heat generated even by a bulb much smaller than the incandescent maximum.

Both heating concerns increase with an enclosed fixture.

The problem is testing. Proper certification requires testing, and testing costs money. A manufacturer could use the biggest LED bulb they can find in order to provide the highest possible rating. But why bother? A 60W "equivalent" is typically around 9W or 10W. If the fixture was originally designed for 60W incandescent, then 9.5W (more or less) is plenty to allow for similar usage with an LED bulb.

Will it actually be safe with 20W (or more, up to 60W) of LED bulbs in this fixture? Probably. Is it worth risking burning your house down*, when you can find a different fixture that is rated to handle the higher output light you want? No.

In addition to a fixture with a higher rating, you should consider a fixture with integrated LEDs. That can give you some real advantages in terms of form factor as they don't have to be designed around bulbs.

*Note: Your insurance will not be happy, and might not pay, if they find out the fixture that burned your house down was used in a way clearly contrary to the instructions.

Not the answer you're looking for? Browse other questions tagged light-fixture led or ask your own question.

3
Can you install an LED floodlight in a regular ceiling fan?
5
Trouble with LED bulbs
2
HPS bulbs and ballast wattage compatibilty vs replacement technologies
2
LEDs in a multi-bulb fixture only dim when installed alongside a single 60W incandescent bulb
2
Can I use a brighter bulb in a Harbor Breeze Caratuk fixture?
1
Why do some lamps have different power ratings for different kinds of bulbs?
2
How do I know what LED bulbs are safe to use in fixtures that are part of construction?
0
GU24 to E26 light socket adapter -- any risks?
0
Certain light bulbs not working in fixture