For a while my house was plagued with sporadic bursts of no hot water from any of the taps, despite the pressurised hot water tank being full of water heated to a skin-blistering temperature.

Eventually the fault was found to be the thermostatic bath/shower in the bathroom. With the hot feed to the bathroom shut off with an isolator, cold water would come from the bathroom sink's hot tap when opened; the flow rate varied as the temperature dial of the shower was adjusted. With the isolator open, all hot taps in the house got up to temperature but quickly ran cold after a minute or so. With the isolator closed, it was skin-blistering o'clock as expected. This phenomenon was observed regardless of whether the shower and sink tap are turned OFF or ON.

Ultimately it was determined that the thermostatic cartridge had given up the ghost so I fitted a replacement in February 2021.

After six months, the exact same problem is back.

Considering a new cartridge was fitted not long ago:

If it is (1) then so be it However, I don't want to keep buying new cartridges if it is just masking the problem.

If it is (2), what are the possibilities? The cold leeches into the hot even when the shower is off, and when the sink tap is off too, which seems to go against all generic 'internet answers' of "All mixers leak when they're on." The sink mixer tap was replaced recently, long after the problem was initially solved, so I doubt the tap is the culprit. Unfortunately it is not possible to separate the hot feeds to know for certain, as the pipes are inaccessible once they split to the two devices. There is no doubt that the fault lies within the bathroom as turning the isolator off eradicates the problem. Furthermore, we haven't got any 'original' mixers left; they have all been replaced since the new cartridge was fitted.

If it is (3) then what have I missed? All instructions I have read thus far only talk about calibrating the cartridge by rotating the dial until a specified temperature is reached, usually 38°C, which I have done. However, I have noticed that the dial can turn well over one complete rotation if the limiter is not fitted; could operating the shower with the dial set to either of the extremes cause a failure?

Any assistance will be gratefully received. Turning the isolator handle on and off every day is not a long term solution.

Here lies a representation of the mixer cartridge: 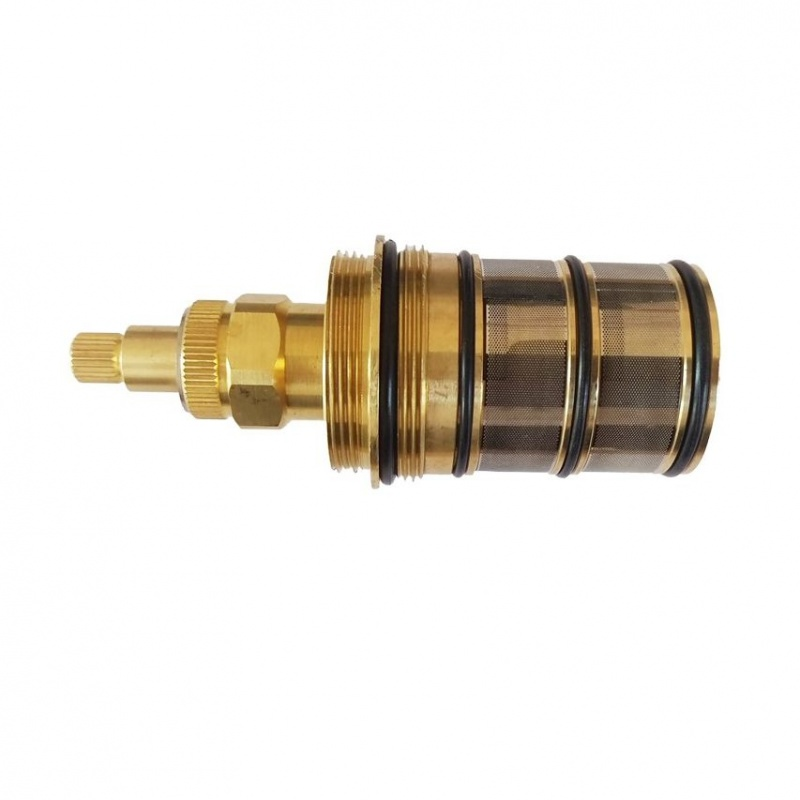 Many thermostatic mixers have two backflow preventers which should prevent the unintended mixing, which takes place upstream the open/close valves.

These BP are upstream of the mixing unit. They are prone to fail since made of a delicate thin rubber skin - and the most frequent cause for the described problem.

So most likely by exchanging the mixing cartridge somehow the failing BP was "convinced" to work again for some time, f.e. by accidentally removing some dirt/limestone which could have been part of the reason to fail.

And/or the pressure relation between hot/cold has been changed which caused more or significant backflow in the defect BP.

Not the answer you're looking for? Browse other questions tagged shower faucet uk leaking or ask your own question.

4
Problems with crossed hot & cold water lines on shower
0
Temperature of water in the shower fluctuates - will a cheap thermostatic tap help?
2
Hot water and cold water switched in shower
2
Single-lever shower faucet - no warm water; just hot/cold
0
Newly installed thermostatic mixer runs cold when shower head raised in height
2
How can I reduce temperature of a hot water tap without adjusting the boiler?
0
Why does my mixer shower run intermittently cold?