So, I've tried to be resourceful and search everywhere but I can't seem to find a solution.

By what I've gathered, my problem might be a "nipple hickey" located in the center of junction box (side note: do NOT Google "nipple hickey" for a solution, at least to this problem).

The center nipple has what looks to be a slot for a flathead screwdriver but it is hollow behind the slot and no way it will turn. 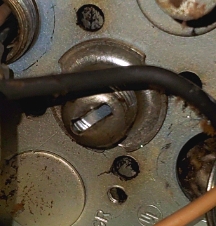 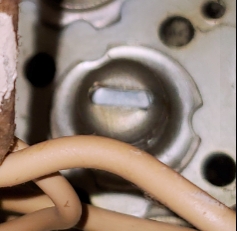 There looks to be a metal surround possibly holding the nipple in place but I've tried pulling and turning and nothing moves. The surround has notches that don’t line up across from one another so it's nearly impossible to get a good grip to turn it. I can't get a flathead behind it enough to try yanking on it either. Is the solution as simple as this?

I'm trying to remove the box entirely to put in recessed wafer lights; even though the lights are thin, box is still in the way to install.

Is this thing a nipple? A hickey? A nickey? If it is or even if it isn't, how do I remove it to take out the box.

Browse other questions tagged electrical light-fixture junction-box or ask your own question.

3
How can I mount an electrical box to exterior foam board?
0
Waterproof Box THHN Clamp and Interior Run
3
Light junction box near water
1
Light trips circuit breaker when connected to box
0
Ceiling light junction box multiple wire detection
1
Replaced lights & switches on 3 way switch circuit; not sure if I have wiring problem or product problem or both
2
How can I rewire to remove/relocate this hidden junction box?
1
Installing a ceiling fan onto an old pancake box