I have a metal junction box in the kitchen of my 1968 home. This jbox contains 2 lights switches that I want to replace. 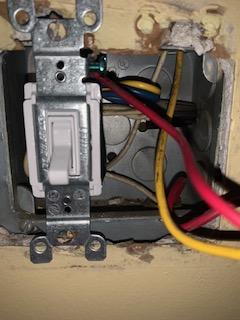 One switch is a 3 way that is for the overhead light/fan that can also be turned on/off by another switch. That had one common wire that was yellow and 2 blue wires. I just wired the new switch exactly as the old and it’s working correctly. 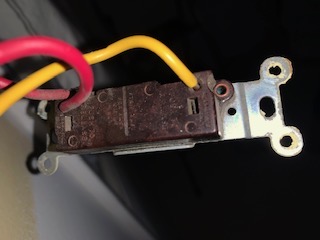 However, I thought the seconds switch would be a single pole because it only turns on an outside light. I bought a single pole that has 2 terminals. Unfortunately, when I pulled out the single pole switch it has 3 wires. 1 yellow which I believe is the common wire, is in a push-in on the back and 2 red wires. One of the red wires is in a push-in and the other is on the terminal.

So, do I need a different on/off switch because I don’t know how to get 3 wires on a switch with only 2 terminals, no push-in. I sincerely appreciate any advice you can give me.

The two reds are connected together internally in the switch. This usually is done to daisy chain the hot to another device, but it could be separate feeds to multiple lights.

The most universal answer is to get a +/-4" piece of solid wire (not white, green or gray) to connect to the new switch, then connect that wire and the two reds together with a properly sized wire connector.

you can lay one wire on each side of the screw under the clamp. (Those wires are stripped back a little too much.)