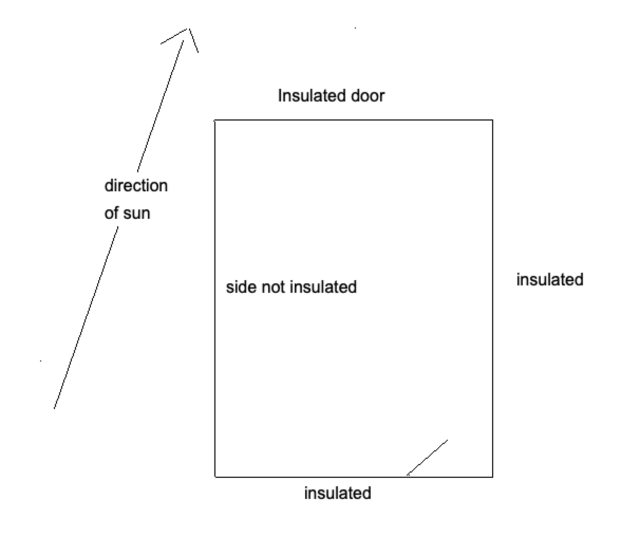 The temp is currently 94 outside. We set the mini-split to 74 at noon. Five hours later, it still can't get below 79.

Is this normal for a mini-split?

It's 12K BTU/hr, and you've given it an uninsulated wall in the sun (R1, MAYBE) and a 20 degree differential, perhaps more due to sun striking the wall/roof. 600 square feet of uninsulated area would use all that up at 20 degrees differential. Given an uninsulated ceiling that's probably 400 square feet (average two car size, since you haven't clarified) and an uninsulated wall, hardly a wonder that you're maxing it out. The "insulated" walls are not perfectly insulated, so there's more load, but you've not given anywhere near enough information to detail how much load they add.

You need at least SOME insulation everywhere (because where you have none, even a little bit will cut your losses by a huge factor - going from R1 to R5 is 20% the load.) That's a very large return on not much insulation. Getting it up to something halfway respectable like R19 will let the unit cool the place effectively AND save you a good deal on your electric bill.

It would be normal for any A/C system unless tremendously oversized to try and get to set point with the inadequate insulation you have. Mini splits are very efficient but can't overcome the lack of insulation. Get it insulated and you'll have much better results as well as a lower energy bill.

Not the answer you're looking for? Browse other questions tagged hvac air-conditioning mini-split or ask your own question.

4
Where should I tap in to the existing duct work?
2
How do I estimate the energy consumption of a ductless mini-split A/C unit?
3
Mini-split vs gas boiler for heating
1
Window unit question btu/sqft
1
How to I eliminate the smell coming from my Mitsubishi mini split units?
2
Mini split minimal pipe length
0
Reusing old service wires from electric furnace to mini-split
0
mini-split drain and insulation question