Can a chin-up bar be supported by just two of the four intended mounting points?

I would like to hang a chin-up bar on a drywall. 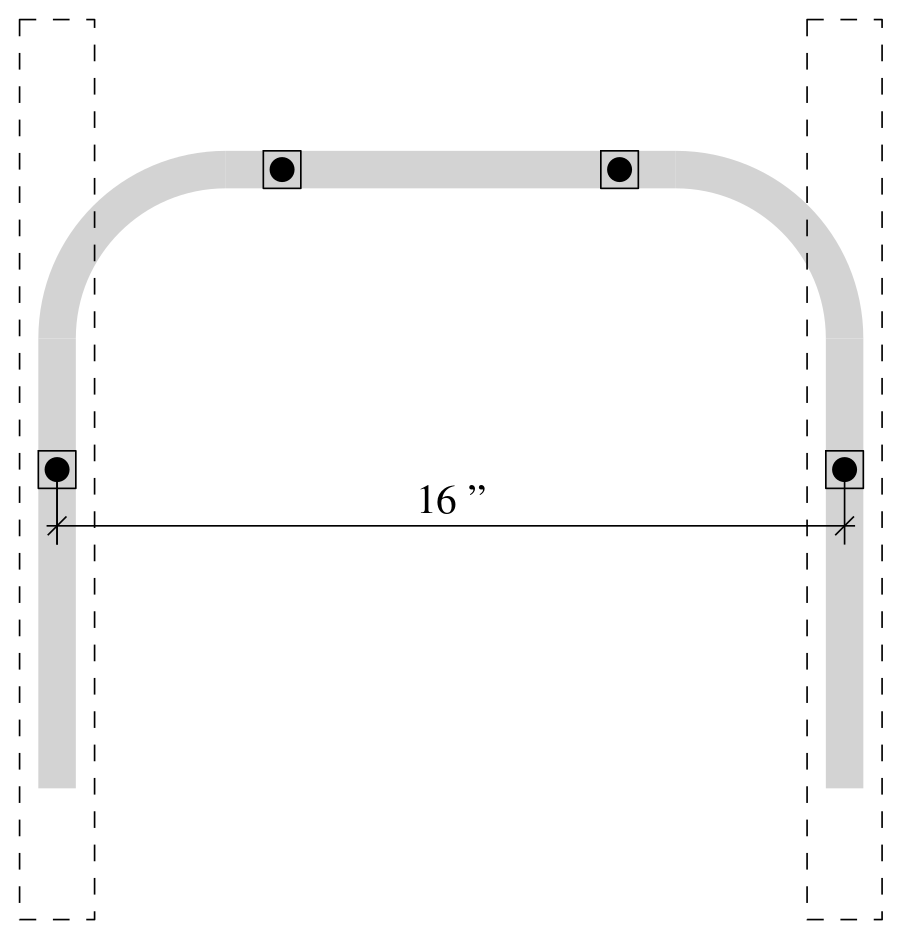 So far I'm lucky. I measured that the studs (dotted in the image) are 16‚Ä≥ apart.

The distance between the two lower holes in the frame (grey area in the image) are also 16‚Ä≥ apart.

But the two top screws are problematic.

Let me add a second diagram that illustrates how the weight is transferred. 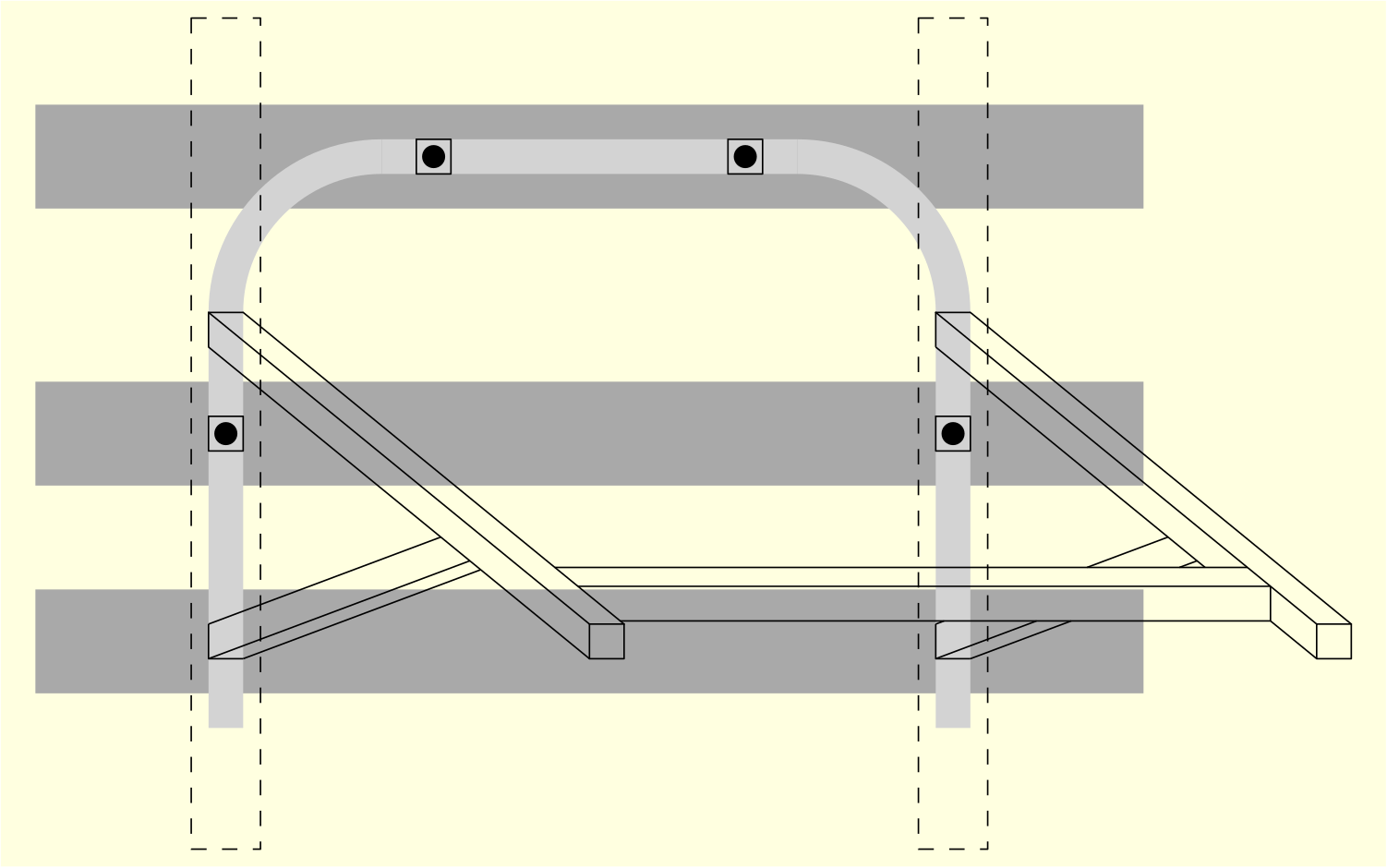 Notice in particular that the frame consists, as is common, of a diagonal support that takes the load to the wall through compression.

This means that omitting to add lumber underneath the bottom part of the structure will result in either:

This means that in addition to the two pieces of lumber suggested in isherwood's solution, it may be necessary to add a third piece of lumber. That third piece need only be glued to the wall.

Which would you do? Would you:

I'm giving up putting in all the details in one question. I posted a sequel here.

#1 relies on the unknown integrity of this device when supported by only the two lower screws. It may not be designed to do that.

#2 doesn't offer anything at all. While hollow-wall anchors can carry quite a bit of weight, it's static weight. The jumping, jostling loads of gym equipment will make mush of your wall. They'll eventually tear out, possibly at an inopportune time.

#3 (or a variation of it using two-by lumber) is the only viable option. I'd probably run three 2x6 boards over your studs with two 3/8" x 5" lag screws at each connection and mount to those. These would be arranged behind each set of mounting points and at the bottom of the device. This approach essentially eliminates undue compression on the drywall--mounting directly to drywall, even with framing behind, risks making mush out of it over time. I would use a router to put a substantial radius on all edges, and then I'd stain and varnish to suit.

An illustration of this solution was provided by Sam. The third board mentioned above is not shown as new information has been added to the question since it was drawn. 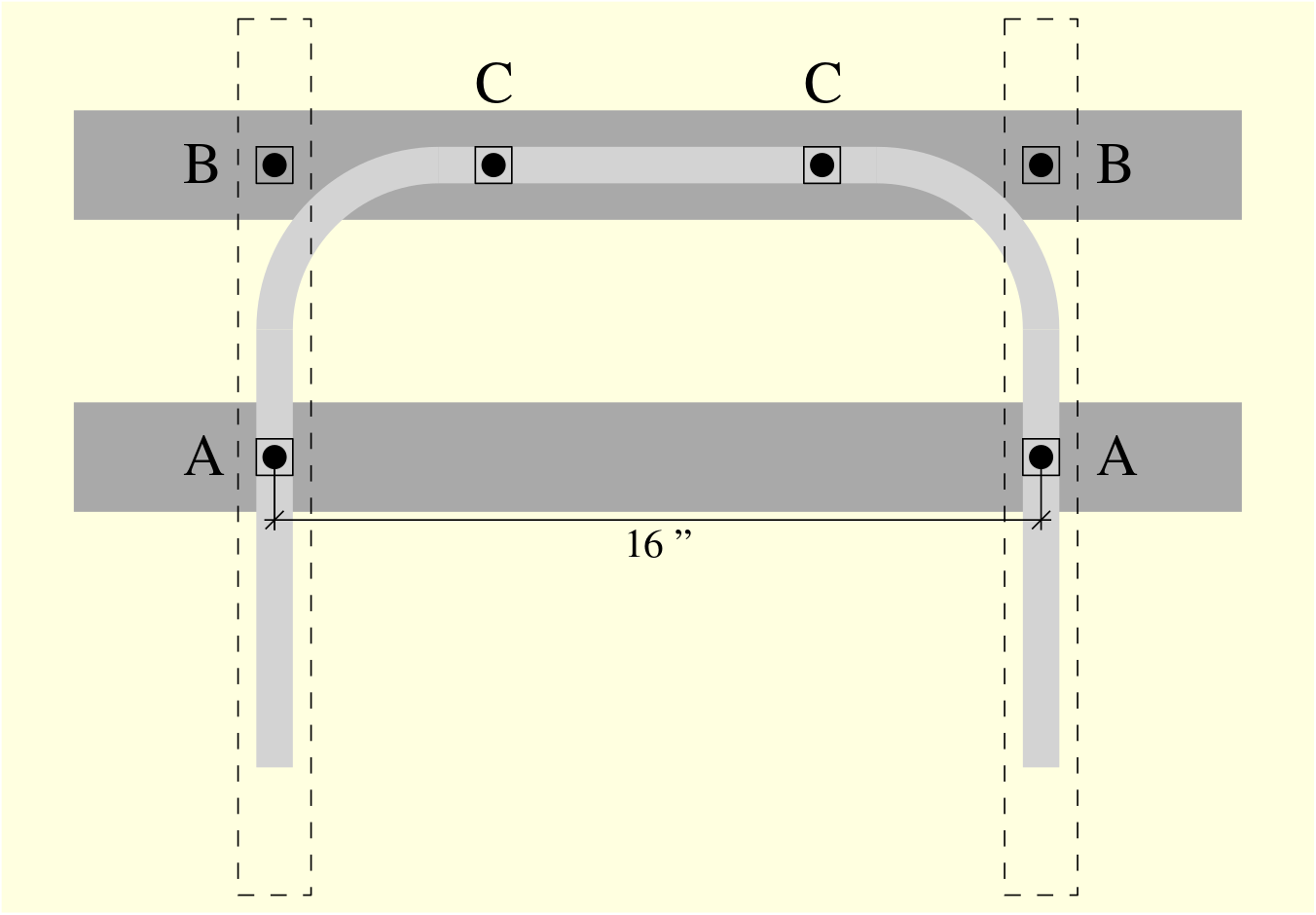 Not the answer you're looking for? Browse other questions tagged hanging drywall-anchor or ask your own question.

1
Is a spade bit the right tool for burying a 3/8‚Ä≥ bolt in plywood?
0
Which nut and bolt to attach wood to metal?

0
How can I hang small weights from a drywall ceiling in a way that's minimally destructive?
2
How to hang 1/4" Plywood
2
How much weight can lagbolts hold, or how can I support this piece of slate on a wall?
1
How to hang a heavy mirror with rotating support hinges?
1
Hanging a heavy object with the help of a plywood beam (due to a mismatch with studs)
1
Drilling into outdoor stucco to hang bike
0
Hanging a mirror from its wooden frame
3
Simplest solution for hanging 50lb frame with welded hooks
0
What hardware do I need to hang this cabinet on a wall?
0
Which nut and bolt to attach wood to metal?