Total of three wires in wall junction box (two are hot). How can I wire this to become an outlet that is controlled by an in-wall timer?

Sorry if my title sounds confusing. To elaborate further. In my garage I have a junction box with three sets of Romex wires tucked into the box with a flat cover plate. (no outlet at this box). After removing the cover plate and when using my voltage tester two of the black wires light up when an in-wall timer they are connected to in another location is in the "ON" position. The third one does not. This in-wall timer turns on our outdoor entryway light and outdoor garage lights at the same time. I was hoping to install an outlet at this junction box in my garage so that I can plug in a transformer to turn on my landscape lights at the same time the in-wall timer turns on the entryway and garage lights. When I turn on the in-wall timer manually, the wires become hot. And when I turn them off there is no detection of voltage at this junction box with three Romex wires.

I tried using a GFCI outlet with the third prong hole facing down and installed the black wires (that were hot when I turned the power on at the in-wall timer) to the brass screws (one wire per hole). And the two coordination white wires at on the side with the silver screw. I then used the bottom brass screw to connect the wire that wasn't hot when the power was on along with the white wire to the silver screw at the bottom. It's not working and all I see is the bottom red light (which should be green to let you know it's good to go and has power. Otherwise the outlet does not provide power.

How do I wire this correctly in order for this outlet to serve as a power source that only turns on when my in-wall timer sends power through these three wires?

Turns out I was able to figure this out. First of all, I was wrong about the wiring. There is only one hot wire. The other two power the two pairs of lights in the front of our garage door. I think what happened was I didn't separate the Romex wires well enough and the current was passing through to the next Romex; making me believe two were hot. After I put some distance between them only one of them tested as hot.

It's a long story but to be quick; one pair of lights were controlled by an old manual in-wall timer (where the three wires I was working with connected at a junction box I described above that had a flat cover plate to hide/protect them. I forgot I had that old manual timer removed last year in order to connect them all together and turn all the lights on at the garage. Not to mention, it was so loud and was clicking like an old clock I could hear in the house (when we had our garage door to our kitchen open). I The other wire turns on the other pair of lights along with the entryway lights. I know, it's goofy. My voltage detector is a bit shoddy so I bought a new one this evening and correctly discovered there was only one hot wire. After going to a big box store I bought some wago connectors (for four wires) and was informed to use one for all the black, one for the white wires and one for the ground wires. I used the fourth wago hole insert to pigtail to a new outlet I bought which is not GFCI. He said I didn't need a GFCI since these are what power the two pairs of LED lights in front of my garage along the underside of the eve.

Here is an image of the two pairs of lights that were once controlled separately by one manual in-wall timer and another switch that also controlled the light at the entryway. Now it is wired so that they all go on at the same time with a digital in-wall timer. And my outlet is working perfectly inside the garage to power my landscape lights.

Image of the two pairs of lights in front of the garage: 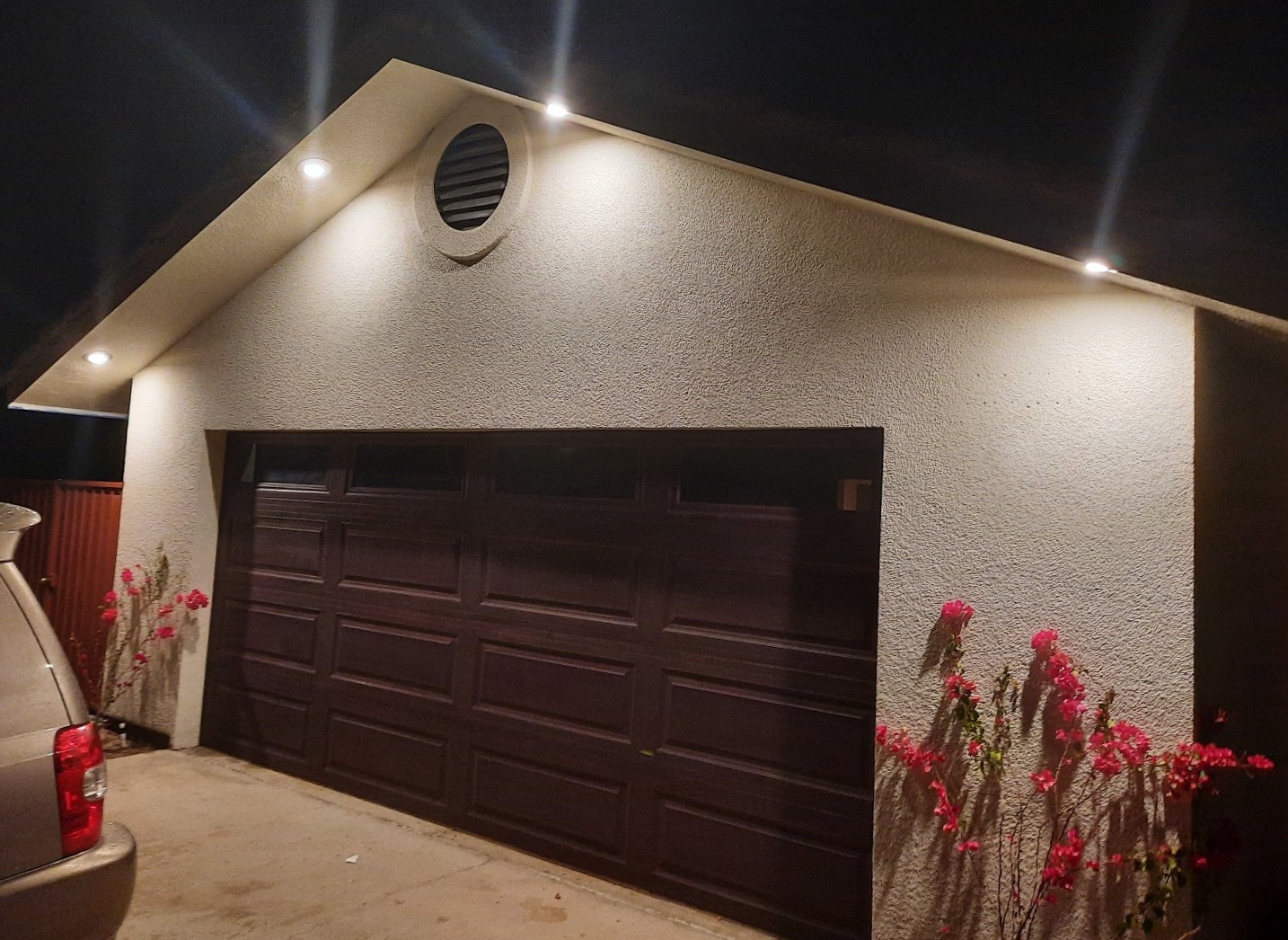 Images of my landscape lights: 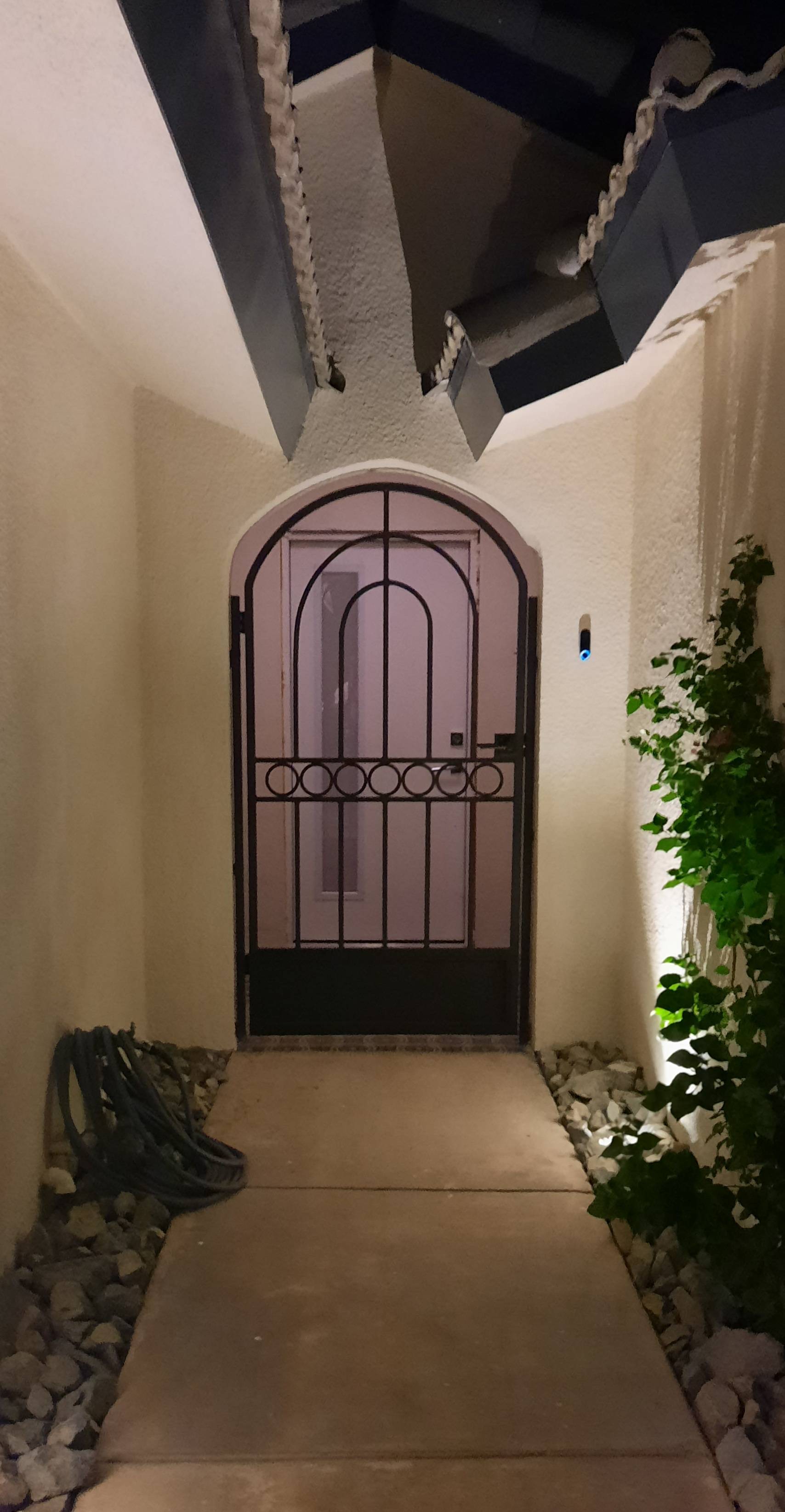 Now, everything including my landscape lights all turn on at the same time. Yay!

4
How can I wire this three-way circuit between two buildings with only 3 conductors?
3
How do I properly wire this outdoor junction box?
1
3 sets of wires in outlet box, lights won’t turn off
0
Two hot wires in switch junction box
2
Replacing outlet; found one white wire hot. How to connect?
1
Add switches for two new lights to an existing switch box
1
How should I wire / connect a new ceiling light to this ceiling junction box?
0
Replacing a wall outlet with three black and three white wires with a smart outlet with one white and one black wire
0
Can I wire this three wire fixture to my two wire junction box?