I'm getting a new dual fuel range and am figuring out how to connect the electric. It's a Thor brand, model HRD3088ULP.

The oven specifies that it should use a 30 Amp breaker, but also should use a 14-50 NEMA plug/outlet. That sounds to me like a potential problem if someone upgrades to a range that draws closer to 50 A.

Here's the relevant section from the spec sheet:

I have a 10/4 cable already wired near the right place from a 30 A breaker.

Is it common or acceptable to install a 14-50 outlet on a 30 A circuit? Should I ignore their spec and just install 14-30 instead? The range doesn't come with a plug.

The User's Manual is similar, except it doesn't mention anything about a 30A breaker, just that it could need up to 30A. 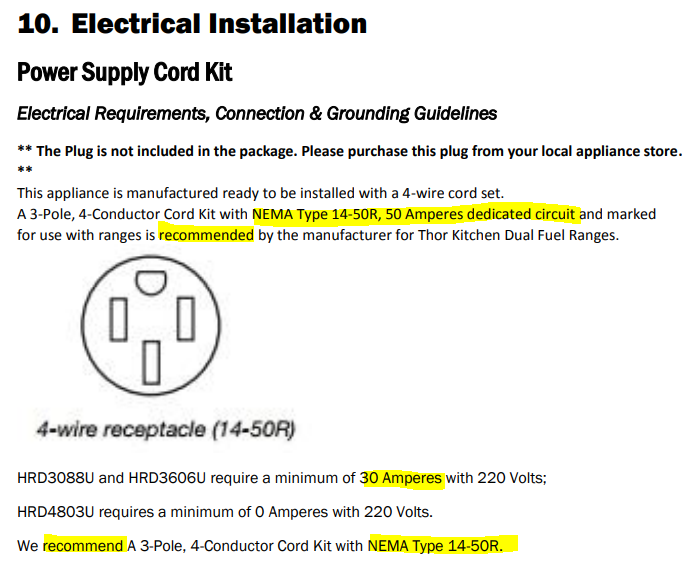 The only breaker that the User's Manual says to use is obviously wrong though:

This appliance should be connected by means of permanent "hard wiring" or by means of a power supply cord kit.

Install a decent size metal junction box (i.e., might as well make it large enough for a future 14-50 and/or 6 AWG wiring, etc. should it ever be needed) on the wall. Use appropriate 10 AWG cable (the pros can tell you exactly what type would be best) from the range (screw terminals) to the junction box (wire nuts).

Because of the gas connection, some work will be needed if you need to remove the range anyway, so a simple cord/pluh/receptacle electrical connection doesn't provide any real advantage over hard wiring.

IMO the best thing to do given your 30A wiring would be to install a 30A outlet and replace the power cord with a suitable one with a 14-30 plug. New power cord is cheap.

It appears, from the document you linked, that the range comes fitted with a 50A plug. Perhaps the manufacturer believes this will be compatible with most customers' existing or desired installations, so they fit that plug and request that you fit a smaller breaker. Hard to read their minds, but I'll tell you mine: I have a gas range but if I was to run cable for an all-electric range, I'd absolutely run cable suitable for 50A, regardless of what range I was buying. I think most people would. So maybe that's why they do what they do.

I don't know if putting a 50A outlet on your 30A wiring with a 30A breaker is to code. I can see some dangers, and if you are allowed to and choose to do it, you ought to label the outlet with "Fed by 10ga wire and 30A breaker" so in future nobody will take the 50A outlet as a cue that they may swap the breaker to a 50A one. Given the low cost of a replacement power cord I wouldn't choose this option even if it's allowed.

Peeking at the Installation section of the User Manual (hint - you can easily find these things online), I see

a) For 30-inch and 36-inch Dual Fuel Range, only a 4-conductor power-supply cord kit rated __240__volts, 30A amperes minimum and marked for use with ranges shall be used

The connection can be made to any compatible 240 source, as shown in this diagram 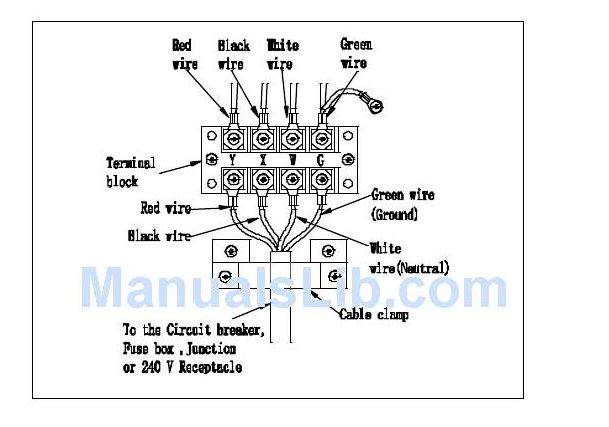 Now, I see the oven rating is close to 4 kW (top and bottom both on).
That's only 17 amps at 240VAC, which is why they call for a 30A breaker (which means the continuous allowed current is 25A IIRC). So, any 4-wire connector you use that's rated for 30A peak (and same for the wire gauge) is acceptable.

The National electric code NEC 2020 requires manufacturers instructions to be followed. 110.3.B : this requirement has been code for decades and actually overrides the code information that you are concerned with. If I was installing a 50 amp receptacle I would size the wire for the receptacle but the max breaker is 30 so if you had smaller wire 10 awg the 30 amp breaker would trip before causing damage to the wiring. So you can always install larger wire but you have to meet the requirements of the 50a receptacle and 30 amp breaker.

Not the answer you're looking for? Browse other questions tagged receptacle circuit-breaker range or ask your own question.