I’m trying to solve two problems with a 1000 sq ft brick each style house with a walk out basement. The back basement wall is concrete and has a sliding door on the walkout. In order to add a couple basement bedrooms along the back wall I need to add in a couple egress windows, cutting into the basement walls as the sliding door doesn’t count as an approved egress per county plan reviewer.

The back basement wall supports the brick ledge and has settled a couple inches over the years causing the upstairs floor to bow some to the backside of the house.

I’d like to remove most of the back basement concrete wall and add wood framing there so that I can solve both the egress window problem as well as level the upstairs floor by jacking the upstairs back up to level prior to building the new wall in place.

I wanted to get this forums thoughts on this path forward or alternatives. Thanks. 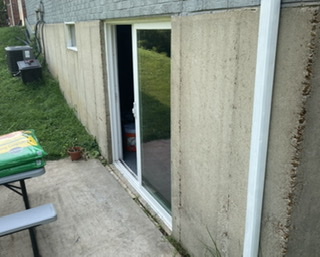 Most Building Officials consider sliding doors as doors that take “special knowledge” on how to operate. (Latches and locks and pulling a door in an emergency appears to be too confusing. See ICC R310.1.4)

The Code requires “Emergency Escape and Rescue Openings” in every sleeping room. (See ICC R310.1) However, it does not require a window. You could install a “swing type” door.

If the two sleeping rooms are side by side and where the existing slider is located, you could install the doors in the existing opening and then fix the sloping ceiling/ floor. If that does not quite work, you could install a one-hour fire rated corridor from each bedroom to the new swinging doors. (However, you’ll still need another bedroom door to the basement area AND written approval by the Building Official.)

Obviously, any structural change will take a Building Permit. However, if you just add new doors, then it’s not structural. (I’d let the Building Officials know it’s “maintenance”, which does not require a Permit.)

Edit: Remember, those egress windows work both ways. They’re for the occupants to escape, but also there for fire fighters to look in and see if anyone needs help. If you talk the Building Officials into the one hour corridor, you’ll also want a window too… just to see the sun and visual connection to the exterior.

Not the answer you're looking for? Browse other questions tagged concrete walls framing structural leveling or ask your own question.

7
How to finish room with protruding concrete ledge/foundation?
2
How should I build a low profile stud wall in a basement?
0
Foundation inside and outside of house cracking
0
Options for mitigating a sloping floor due to settlement
10
Filling in a sunken living room to level of other floors
1
Concrete floor brick wall gap leaking severely (garage above basement)
1
Flooring Options for Basement with Uneven Concrete Slab