Should I use lag screws or expansion bolts for an aerial mount point on a joist?

I would like to install a mount point on the ceiling for my wife so that she can continue doing aerial work. This is the mount point I want to install: 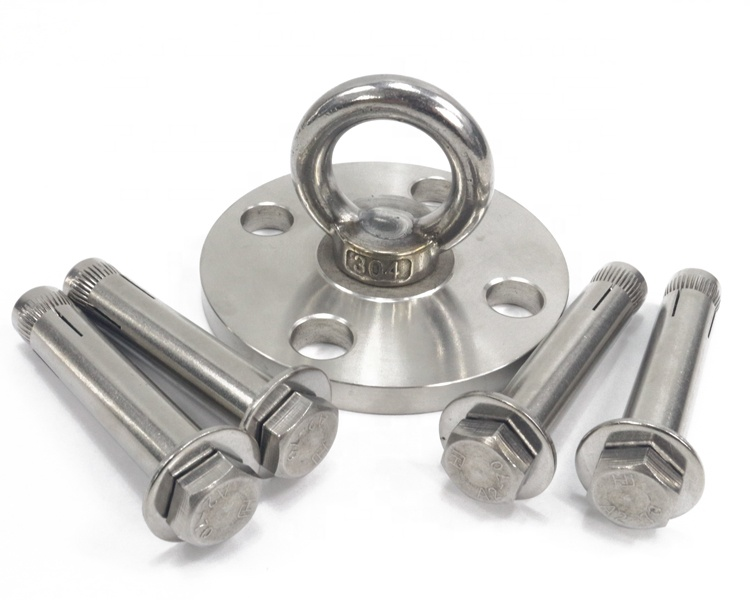 As you can see, the equipment comes with expansion bolts. I HAVE NOT identified a joist in the ceiling (edited: I was wrong, see below) that is large enough to support these bolts, but to me, it seems counter-intuitive to remove material from the joist (drilling holes) for the expansion bolts and then putting the jackets in and bolting the flange in place. I understand the mechanism of action (I think), but I feel as though a longer lag screw with a small diameter pilot bore is going to have more surface area to hold onto, and therefore have more purchase overall and therefore a stronger hold on the joist itself. I could be completely wrong about this, though, which is why I'm here :-)

STUPIDITY EDIT: I had sworn that I had seen in the attic the joists in the ceiling. I was wrong. I went into the attic to take pictures for you, and I could not get a clear picture of them because they are obscured by insulation. So my brain was creating images that did not exist. I apologize.

To be clear about the forces involved: the activity in question is commonly known as "aerial lyra", with a semi-rigid hoop a bit under three feet in diameter, suspended by a doubled-up rope from a heavy carabiner clipped to the ring shown above. The hoop will be swinging back and forth, there will be shearing forces, etc.

This is the exact object which will be suspended from the ceiling, holding a ~150 lb human.

This is what it looks like suspended. It is hard to find pictures in situ that are not in industrial settings since most of the time these are used in warehouses and lofts, not living rooms: 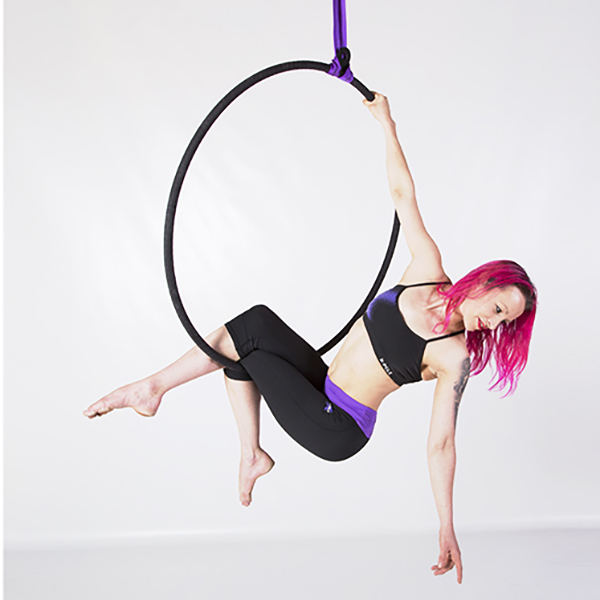 I feel that I am out of my depth here, and I do not want to damage my home or injure my wife. What is the safest, most durable way for me to mount this object to the joist in my ceiling?

My home was built in 1941, and is lathe and plaster construction. There is no drywall in the ceiling.

Edit: Sorry, I should have been putting info here and not in comments. Apologies.

Expansion bolts are used in cement/concrete surfaces. That's what I thought. Thank you for verifying that.

I would be very uncomfortable putting this on one ceiling joist, I think the strain etc from the movement will cause the joist to move and the drywall to fracture. Consider spanning several joists. Yeah, I was thinking this from the beginning, i.e. a plank firmly fastened between two joists with the swivel bolted in the middle.

The problem is that ceilings are not designed to support weight like this. To make this work SAFELY, you really need to consult a licensed and qualified architect or engineer to design the proper support structure for this load. In the end, that may be what I need to do if I don't want anyone to get hurt.

Is there another floor above the room you're planning to install this in, or is the roof above this room? No, this is a single story home with a ~30cm crawlspace below and a very small attic space above.

Thank you everyone for your input. I'll go get the pictures requested.

Second edit: Here's some pictures of the ceiling. 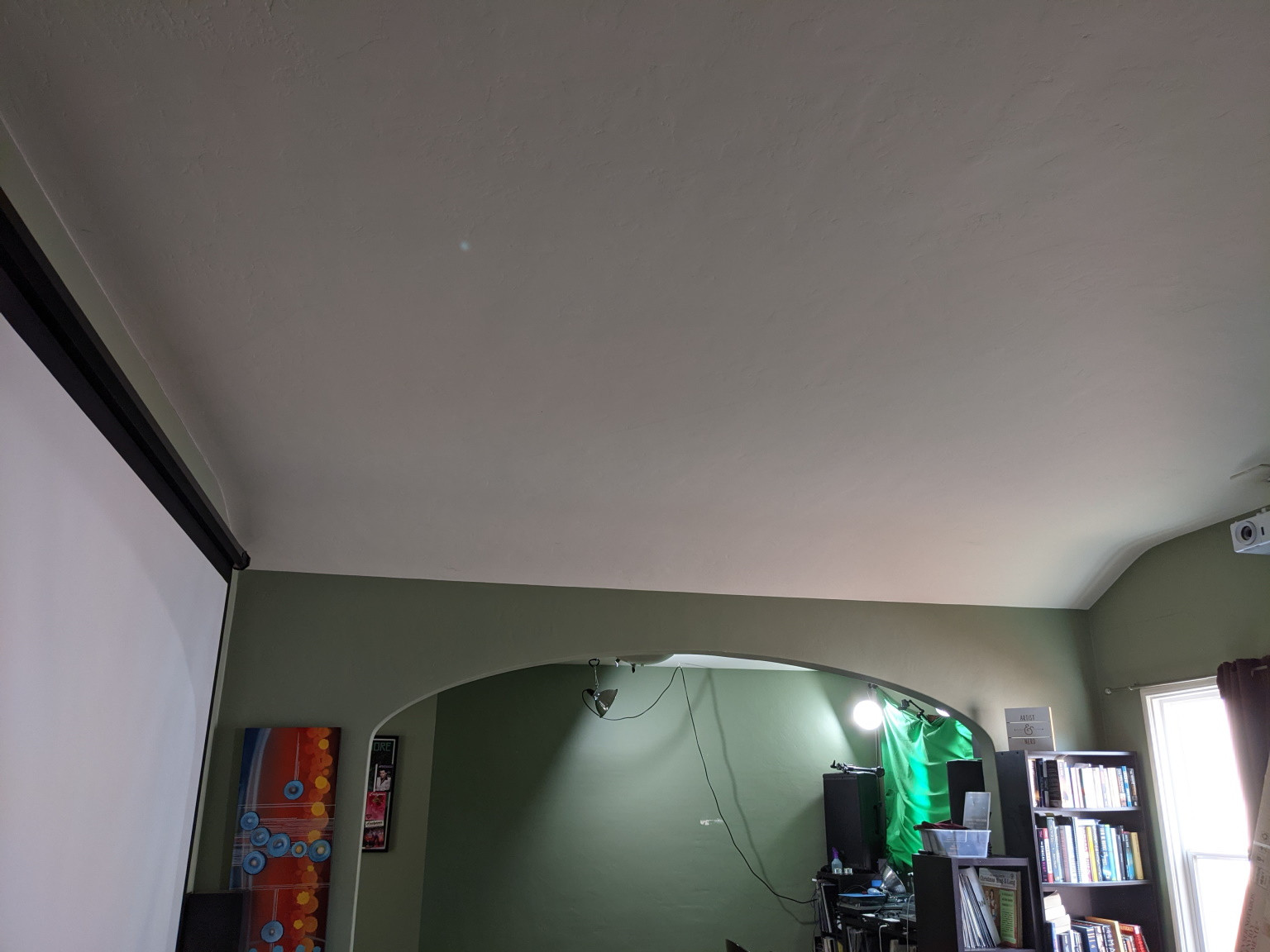 Here's the ceiling looking in from the doorway. 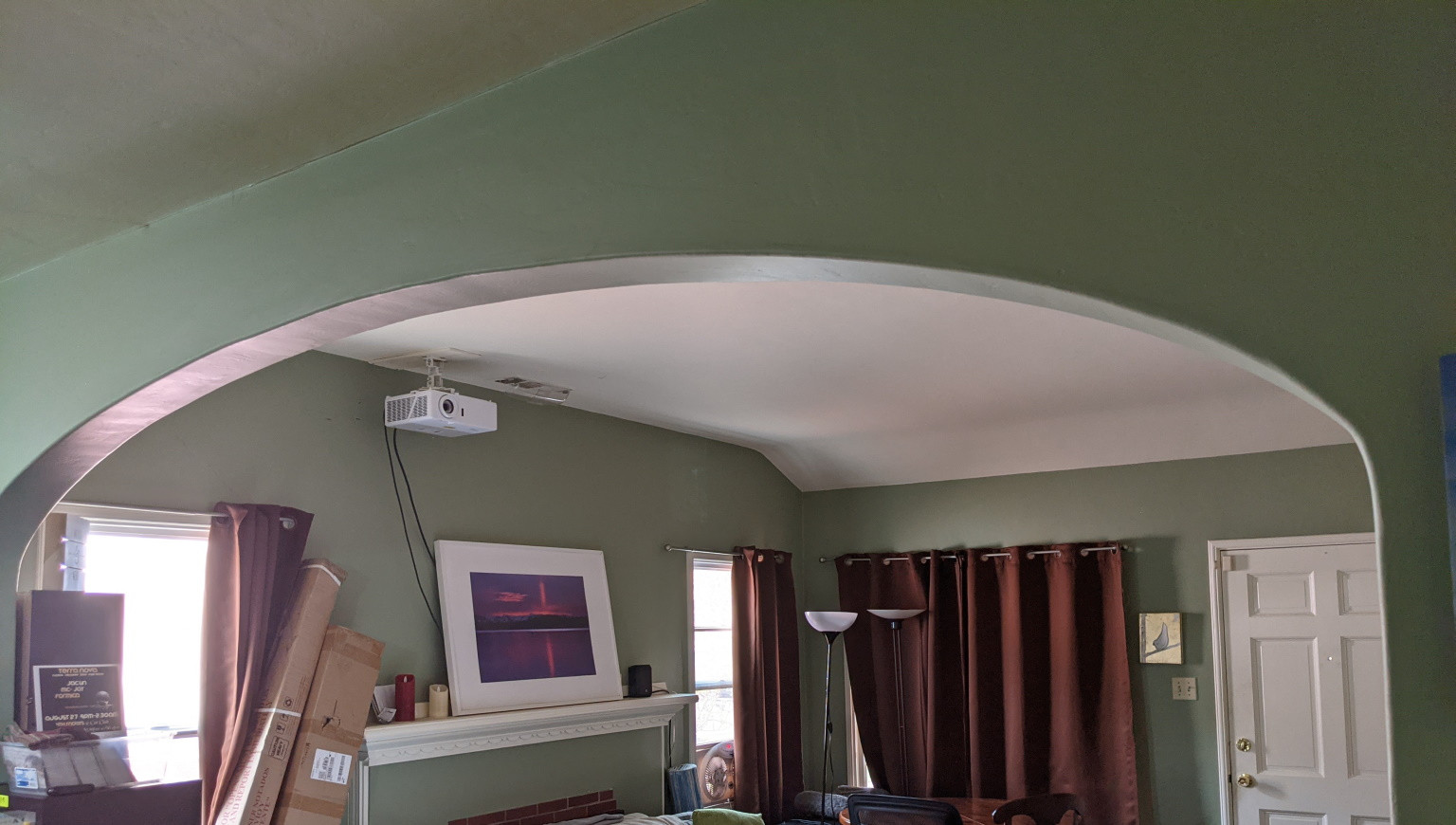 Here's the ceiling from the other direction, from behind the archway that you can see on the far side in the previous picture.

Outdoor swing sets deal with similar loads, and have a single 2x8 or 4x4 beam spanning 10 or 12 feet.

Accounting for many times the dynamic load of a swing set, you could attach a 2x8 across several ceiling joists (6..8 or as many as practical) , which are all likely spaced 16in apart, using 5in lag screws, 2 per joist, and attach the swivel to the 2x8 using lag bolts (not expansion bolts).

Alternatively, you could build a swing set frame tall enough to have legs on the ground and its beam also secured to the ceiling. This would provide rigid stability and transfer the load to the ground.

I was very surprised that there was little to no safe mounting information when I viewed the product you linked to, not even a load rating. Because of the complexity of supporting a live human load, I figured there would be a ton of CYA (cover yur arse) stuff...

However, further digging on the website led me to numerous references related to setting up equipment for what you want to do. From your supplier's website (emphasis mine):

Hopefully this is enough to convince you that your ceiling joists (and perhaps rafters, ridge beam, entire structure) is not designed to support a dynamic/swinging/falling live human load without proper engineering.

Not the answer you're looking for? Browse other questions tagged screws mounting joists bolts or ask your own question.

7
How should I attach a chin-up bar to floor joists?
1
Can I use lag bolts when mounting heavy shelf units through 2 layer drywall?
1
Can I use a 2x8 for a ceiling joist and rafters on a 16' span?
1
What lag bolts to use when mounting 65" TV to drywall using plywood?
1
Attic Floor Joist - Structurally Secure
2
How might I attach pieces of lumber between two garage ceiling joists for the larger goal of mounting a punching bag to the lumber?
2
How to fix a joist that has been cut out
0
Can I move a joist a few inches left without the ceiling falling on my head?
4
How to repair this split ceiling joist?