How to remove an electrical cord strain relief bushing / collar?

How does one remove an electrical cord strain relief bushing/collar like this one: 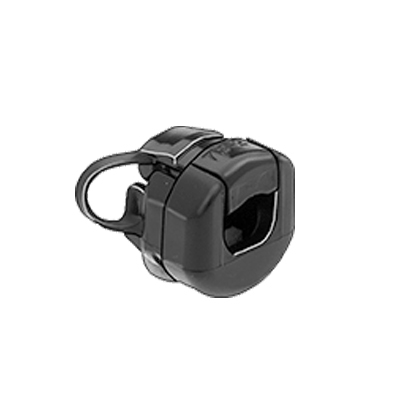 This is the spec sheet for a nearly identical strain relief bushing.

Ideally, I would like to remove it so it can be reused, if that's possible.

The existing one is attached to a garbage disposal (disposer), so there is no easy access the inside of the unit. I seem to recall there is a special type of pliers that can be used for this task, but I would prefer not to have to go out and buy yet another tool for this simple task.

After more searching, I found that this amazing gentleman has a special set of pliers for the task, but I don't have those pliers, and I couldn't find any place near me that sells them.

Without access to the inside wall, you have quite a challenge ahead. I've removed quite a few of these but from the inside, by pressing down with a screwdriver on the top "latch" while simultaneously pulling from the outside.

In your situation, you have to compress the outer portion of the latch, ostensibly to get it below the hole in the wall, while pulling. We've learned to not pull on wiring, due to the damage that can result, but one might surmise that aspect is of low importance.

This allows you to compress the outer portion of the latch with pliers that provide for a reasonable grip. The outward force has to be applied, but the pliers will slip. Provide the outward force by applying gradual pull on the wiring. Wiggling the pliers in the vertical plane may also help to release the detent built into the assembly. Ensure that the pliers are compressing only the smaller movable part with one jaw and the entirety of the grommet on the opposite side.

Not the answer you're looking for? Browse other questions tagged electrical appliances garbage-disposal cord-and-plug extension or ask your own question.

6
How should I wire a GFCI outlet and a switch to isolate the switch but provide GFCI protection further in the series?
0
Is a strain relief clamp necessary for dryer cord installation?
3
Should the wiring to my recessed light have a strain relief and a ground wire connected?
15
How do I fix a broken power cord
1
How to splice new disposal power cord to old outlet wiring
8
Repair frayed electrical wire with strain-relief stopper
16
How do I connect a 4 prong cord on my GE dryer which is currently connected with a 3 prong cord?
2
What kind of strain relief should I use for PVC conduit at a metal box?