I tried installing a smart dimmer switch and add-on into a two-way switch configuration, but after a few hours of messing around I think that the circuit isn't wired properly for a smart switch. Right now the light ( a LED panel wired directly into the circuit ) is way too bright at night so I wanted to put in a smart dimmer.

With the default switches in, it looks like this:

Green: ground, black: load/line, blue: neutral, red: traveller, numbers indicate "bundles" -- 1 is all the wires going to/from the breaker, 2 is the set of four wires going from switch to switch, and 3 goes off somewhere else, probably to the next bedroom as all the ceiling lights are on the same circuit.

Basically, instead of being wired "switch -> switch -> light", the light sits in between the two switches. Based on what else I've seen in this ( newly built! ) townhouse, I think this was the electrician saving themselves some money by using less wire to get this set up =. It works fine for dumb switches, but after spending three hours it seems there's no way to hook up a smart dimmer + add-on that will allow them to control the light.

As far as I can tell, the smart switches are only built to handle the "switch -> switch -> light" setup. The second switch only connects to neutral, ground, and traveller; so in the second box that leaves the load/line wire unconnected and means the circuit is incomplete.

Is there a way I can put in a smart dimmer & add-on that will allow me to control this light? In the second box where the add-on switch goes can I use a wire nut to connect the neutral & line, or will that mess with the add-on switch that needs to be connected to neutral?

Could I use a Shelly dimmer right in the light fixture box?

Or am I just out of luck until I completely re-wire this switch circuit?

I took a better look inside the ceiling light fixture, and here's an updated diagram: 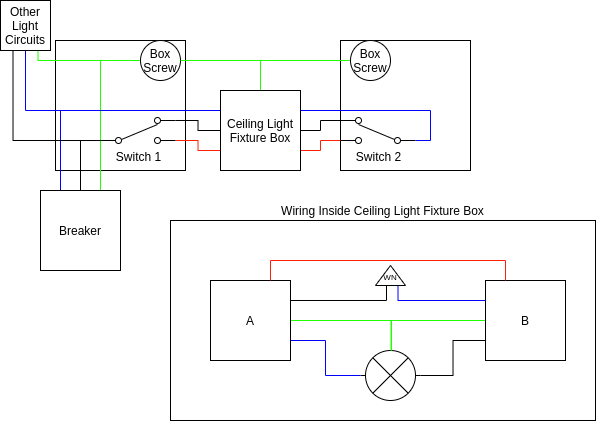 I labeled the inputs into the light fixture as A and B, because I can't tell which one corresponds to switch 1 and which to switch 2. Oh, and the triangle labeled "WN" are wire nuts, because I figured that was the easiest way to show how

Your diagram does not use standard switch symbols so it is impossible to determine where the common pole (C) is and the normally open (NO) and normally closed (NC) contacts are. 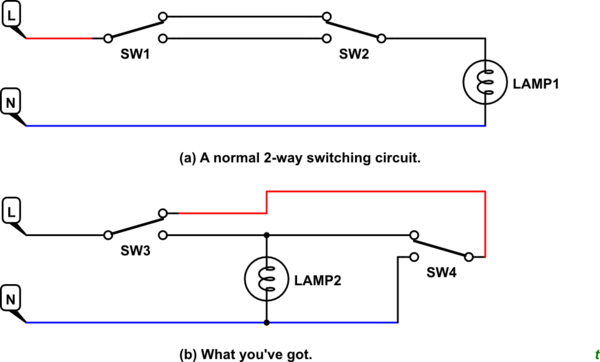 You can see in Figure 1b that switching SW4 will short-circuit the live and neutral.

If you can redraw your circuit we may be able to help further.

Not the answer you're looking for? Browse other questions tagged lighting switch light-fixture dimmer-switch smart-switch or ask your own question.

1
Wiring the Auxiliary switch on a 3-way switch
1
Can I safely disable a three way fan switch to use for providing ground to remote three way box?
1
Is this ceiling box wiring correct and how can I reconnect an abandoned 3-way switch to it?
0
Wiring guidance for a smart dimmer switch (Kasa HS220)
1
Rewiring light fixture and switch to bring neutral line to the switch: one 12/3 switch-leg vs two 12/2 wire to bring power to switch?
0
Installing 3 Gang Smart Switch
4
Wiring Leviton Smart 3-way Switch when Load Line Goes to the Fixture
1
Light on dimmer switch will not stay on
0
3-way smart-switch installation: How do I re-claim the white (currently) traveler to be a neutral?