How to hang a ceiling fan in a metal gazebo

I assembled an hard-top gazebo which has steel loops at the inside peak. I wondered how best to hang a ceiling fan. 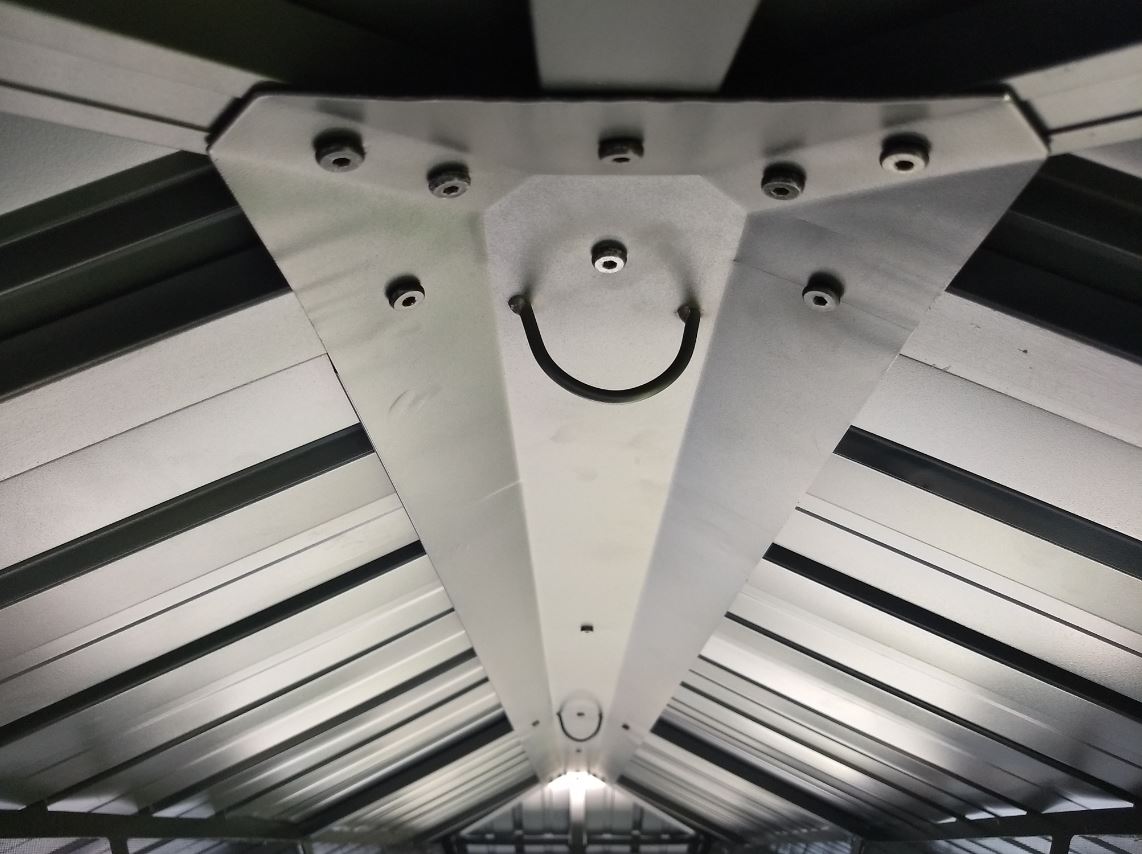 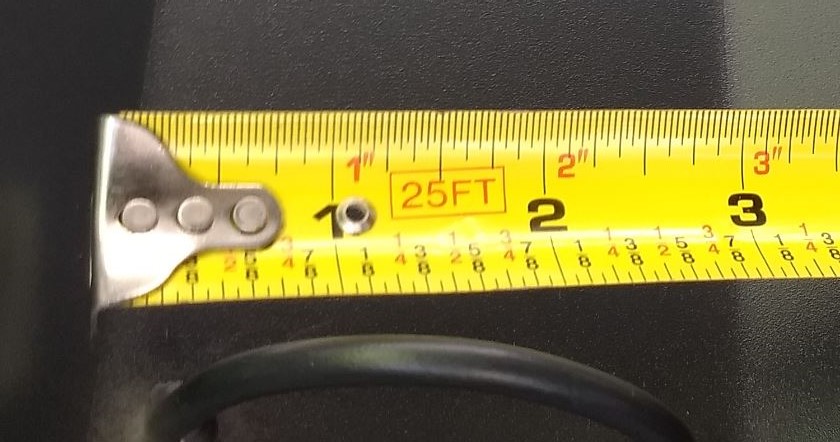 The gazebo is designed with a roof above the interior ridge, something like this: 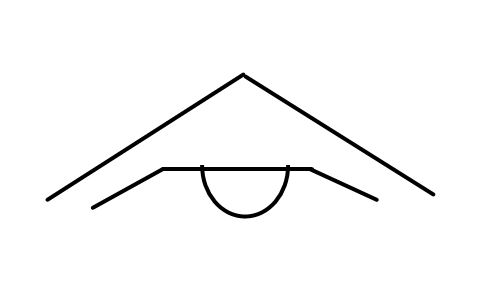 My first thought was to just using self drilling screws to mount a steel electrical box, but I didn't know if I should trust that method to fasten the box. There is no reasonable way to get access to the zone between the two ridges, so that rules-out a nut/bolt solution.

A similar solution would be to drill and tap some holes. That steel is 1.6mm thick. I suppose I could tap the holes, put in some bolts, and then additionally twist some wire around the box and loop, so if the bolts gave out, at least the fan wouldn't fall on someone's head!

Another thought was to cut the loop, leaving two "studs". If I then used a die to make threads, I could put a lock washer and nut on the studs. But that's going to be very tight quarters, trying to make threads on the improvised studs.

I'm afraid to remove any of the existing fasteners because there are a lot of forces in place, and the risk is simply too great to remove a bolt holding the structure, and then not be able to get it back in. I have experience with removing a bolt elsewhere in the structure, and it was very difficult to replace.

If I would have thought about this before assembling the structure, it would have been easy to bolt a steel box in place, but now that the structure is assembled, it would be way too much work to do a nut and bolt solution (I'd have to remove all of the roof panels on one side).

Any thoughts for how to best accomplish a safe but easy way to hanging a ceiling fan in this situation?

I would drill suitable sized holes and fit 4 or even 6 rivnuts in M6 or M8 size.

Rivnuts are easily found and once the hole is drilled, you nut them up and they collapse on the far side like a rivet. They take a lot of force to pull out.

Looks to me like that ridge channel has exposed flanges to which you could mount a bracket with bolts. Some aluminum bar stock would work well to create a mounting plane, then you could mount a plate or just the box. You'd mount your fan box to that. I'd use stainless bolts and nylock nuts.

It's surprisingly easy to fabricate brackets like this. A little planning and a vice and you can bend 1/4" x 1" aluminum easily. You can then bolt anything you like to it.

Hang a ridge pole (2x4 or 2x6, one piece, not finger jointed) inside the two downward projecting metal loops. Attach a fan box to that. There are fan boxes designed to fit the edge of 2x structural lumber. Paint the ridge pole to match the color of the metal roof. The extra spacing downward will help to provide the clearance of the blades from sloping roof, but be sure that there is no interference with purlins shown in the picture.

Such a ridge pole would allow easy hanging of other items.

If you want to seriously consider this, I would offer some suggestions on how to lock the ridge pole without drilling into the metal.

What brand and model of fan are you intending to install?

IIRC some of the fans I've installed had two different lengths of hanging tubing in the kit, but both were for level 8' ceilings. On taller and sloping ceilings I have bought extra long tubing from a fan store.

A wooden beam outside can be attacked by carpenter bees or carpenter ants. Perhaps a structural steel beam would be better than a wooden 2x4. Something 1.5 inches wide would accept a fan box intended for the edge of 2x lumber. Maybe the heaviest gauge of steel stud or similar configuration.

I'd just use #6 self drilling steel screws to attach a surface mount fan box.
4 screws should be plenty, 8 would be massive overkill, But you're allowed to drill extra holes in electrical boxes to attach them to things.

I see absolutely nothing wrong with your idea of self-drillers, assuming you have sufficient space behind & you can get maybe 4 screws of sufficient size through your mounting plate. You can also consider your plate self-drillable if the existing holes feel a bit small.

I spent 10 years as a maintenance engineer in retail - & self-drillers were the go-to for semi-permanent mounts to such as supermarket shelves when the provided mount points were insufficient to just bolt through, even in areas the public could get their clumsy fingers to try break things. [If something will survive the public in retail it will survive most things.]
Self-drillers come in sizes from 'will just about hold a matchbox' to 'can swing from it on a rope'.

Here is the way I ended up doing the ceiling fan mounting in the gazebo.

The bottom line is that I went with pop-rivets, plus I used a bolt as a secondary safety measure.

First I cut a slot in the electrical box: 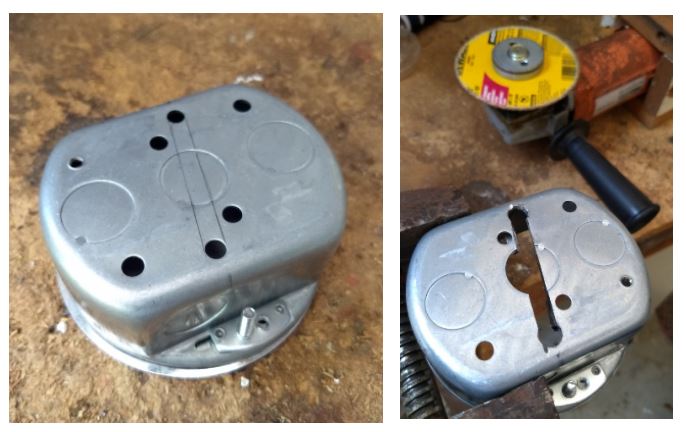 Finally, I put a bolt through the box and the gazebo loop as a safety measure: 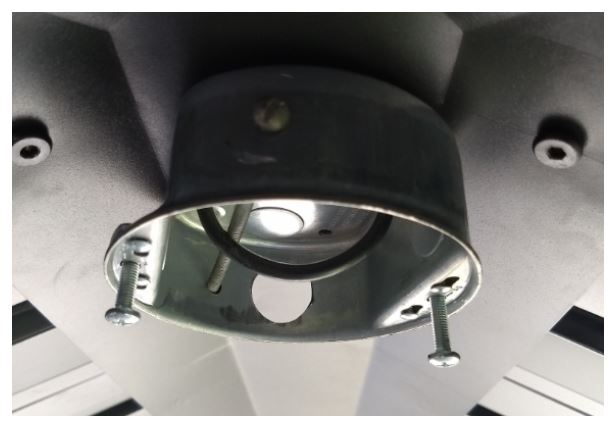 1
Want to install an outdoor ceiling fan directly to exposed 2x4 on a covered porch
2
Can we safely hang a ceiling fan from our vaulted livingroom ceiling?
2
How to mount metal box to wooden beam?
1
Ceiling fan mounting, old home, worried I did it wrong
4
remedying ceiling fan horror-show
11
How to hang a ceiling fan box in gazebo with no parallel joists?
0
Trying to find correct bolt for ceiling fan electrical box
2
Can a chin-up bar be supported by just two of the four intended mounting points?
0
Which nut and bolt to attach wood to metal?