Is flow direction through fittings important when fitting PVC or ABS pipe?

I am replacing the rusted out plumbing (drain, p trap, tee, trap adapters, 45 degree elbow) under my kitchen sink with ABS, but I notice that some fittings offer a choice of hub or spigot connections.

There are a couple of places (particularly an elbow and adapter connection) where I can arrange the connections so the water will flow from a hub into a spigot, or a spigot into a hub. But I don't know if one way is better than the other.

I tried searching "abs spigot hub flow direction", but the only relevant result (among many, many irrelevant Home Depot links) was for PVC, which indicated flow from the spigot to bell (hub) would encounter a square edge that had a marginal effect on hydraulics. But looking at the ABS connections, it seems the opposite - the square edge is encountered when going from hub to spigot.

But I am more concerned with drain pipes and which orientation will be less likely to trap waste from the garbage disposal and other small bits that typically goes down the drain of a kitchen sink. 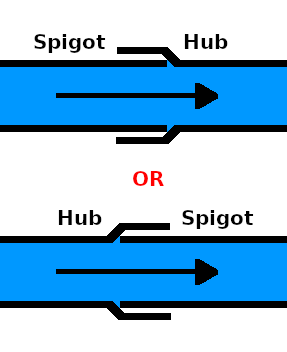 Is there any preferred or conventional way of arranging ABS spigot/hub connections with respect to the flow of waste water?

It makes no difference with cement-welded pipe. If you install a wye or tee or other splitter you inherently have one of each anyway. Also keep in mind that enough cement and dissolved plastic tends to push out at that area that the interior shape of the part (sloped vs. square) becomes somewhat moot.

I suspect that you're actually referring to "street" fittings--those without a hub on one end. Those exist mostly for ease of fitment in tight areas and a few other special cases. It's not about flow direction.

I'm not a plumber, but I've done a lot of plumbing and watched many good plumbers work on new homes when I was a builder. I don't recall anyone ever making the distinction you have in your post, nor have I heard the term "spigot" applied thusly. It's just not a concern. Good luck with your project.

Not the answer you're looking for? Browse other questions tagged plumbing kitchen-sink abs spigot or ask your own question.

0
How do I repair this friction ABS kitchen sink pipe fitting
1
How can I lower a dirty arm trap drain(outlet) to accommodate a lower sink?
0
ABS offset toilet flange dilemma. Suggestions to make my 11" rough-in into a 12" rough-in. USA
2
Standard height for kitchen sink drain exit from wall?
0
Remove ABS P Trap
1
How can I move/replace this ABS p-trap?
0
Which sanitary tee for kitchen sink plumbing?