There is a space of about 12" between my concrete drive and the house. 4" perforated PVC pipe is run the length of the house in this space and drains into the yard out back. The pipe is covered over with about 6" of clear stone. This French drain is under the eave of the house with a gutter, so very little rain water enters -- the drain is really there to deal with snow melt in the spring (I'm in Wisconsin).

At the back corner of the house I have a gutter downspout (3" by 4") that drains half the roof, about 400 sq ft. This used to dump onto a brick patio but this caused water to enter the basement and was damaging the patio. Then I diverted it onto the driveway, but this creates a sheet of ice in the winter.

Now I have connected it into the French drain. With a light rain, everything works fine. But when there's a heavy rain, the system is overwhelmed and I get water seeping through the foundation into the basement.

What options do I have to solve this problem?

Note that I am literally between a rock and a hard place here -- a 12" space between a concrete drive on one side, and the house (and then patio) on the other side. Three options I've thought of:

Note that view of the downspout is blocked by the gate post in this picture, but it's on the corner of the house. 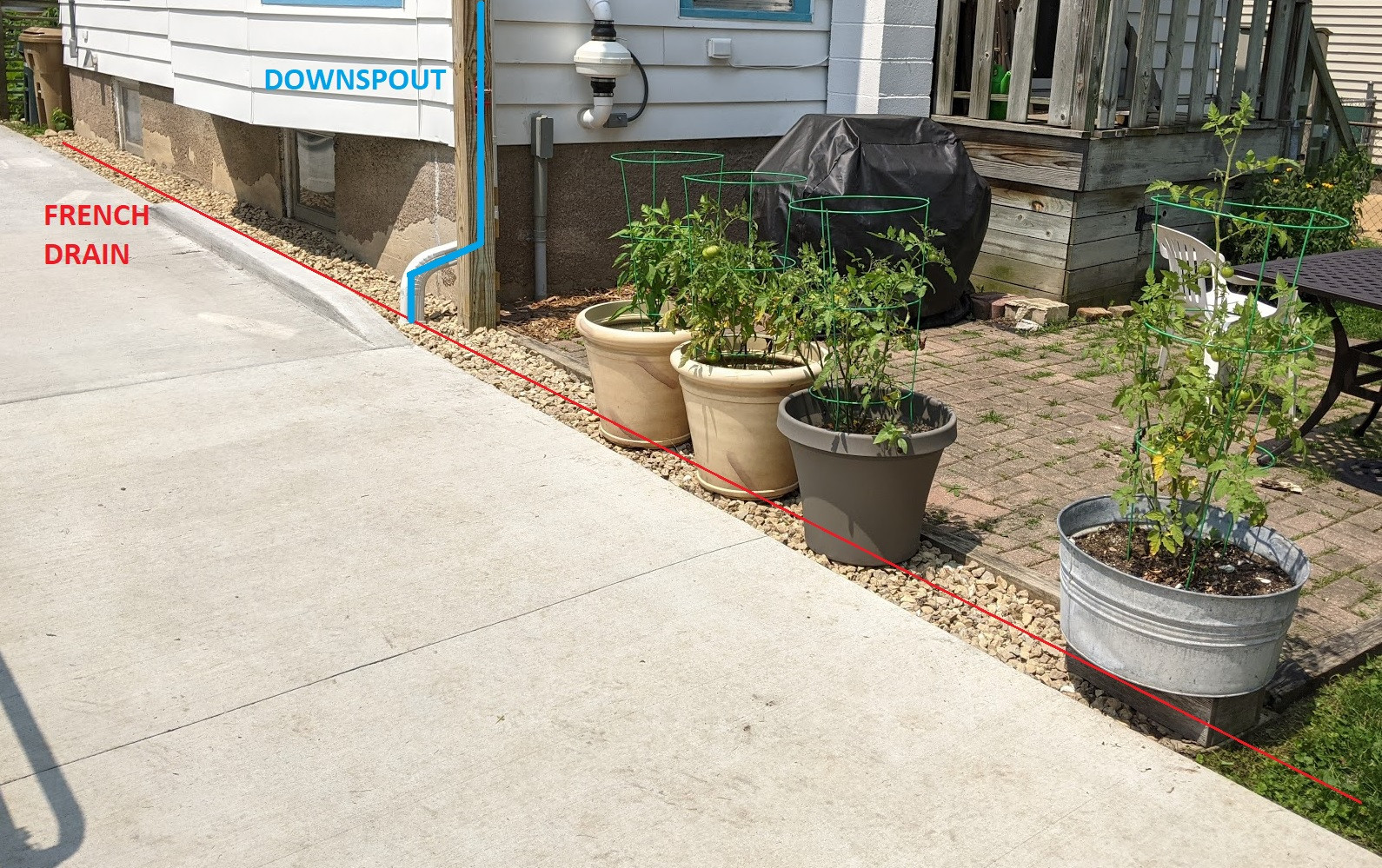 Putting two separate drains in the same trench is more likely to work that what you propose which is putting more water into the french drain that it can handle.

I had a problem similar to yours and my fix was not an easy one. I dug a trench, about 100 feet long and 24" deep, lined with 12" of gravel, and installed a dedicated line of perforated pipe. I used SCH 35 pipe and not that cheap black stuff you buy in coils, and at the end of the pipe I had a "dry well" installed that was about 8'X 8'X 6' deep and back filled with #3 limestone. This took care of most of the rain from my roof and helped keep my basement dry. Every thing else I tried meant pools of water where I did not want them. 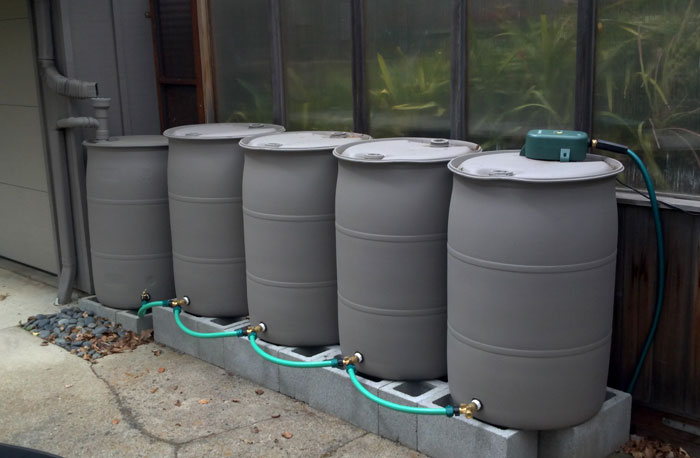 Install rain barrels as a buffer. They can capture the heavy rain and so decrease the volume your french drain needs to accomodate at any one time. You could leave one open to the french drain at a rate it can handle, or to a hose down the driveway since it is not going to freeze. Or you could accumulate the water and let it out once the rain is done.

Or use it for irrigation or washing the car. Sweet water from the sky.

I like this because you don't need to dig, and it will be fun to find uses for the water you save. Plus rain barrels are hip. Maybe you are in one of those parts of Wisconsin where people will appreciate your interest in Mother Earth and they will bring you beer and then listen while you explain about your system.

Not the answer you're looking for? Browse other questions tagged drainage gutters french-drain or ask your own question.

4
How much drainage pipe should I bury for a new downspout?
6
How should I install a french drain in this situation, and will it help?
1
basement sump pump water level above drain tile
1
Does a French drain need to terminate above ground?
3
How should I put a gutter downspout on a corner of my house surrounded by pavement?
2
Water pressure from slope causing crack and lean in foundation. Is a French drain the answer?
1
How to seal between aluminum downspout and PVC adapter?
1
moving water away from gutter downspout
0
How far out to install French drain so water can't pass underneath it and still get into house?