Why did electrician wire light switch without a neutral instead of running it this other way?

Here is what I think is currently done in my attic. All the work is done using 12/2 yellow romex (3 wires for each run: ground, white, black). The light switch when I open it up does not have a neutral. The white wire is wrapped with black tape around it. I assume this means that there is line voltage on it based on my reading. 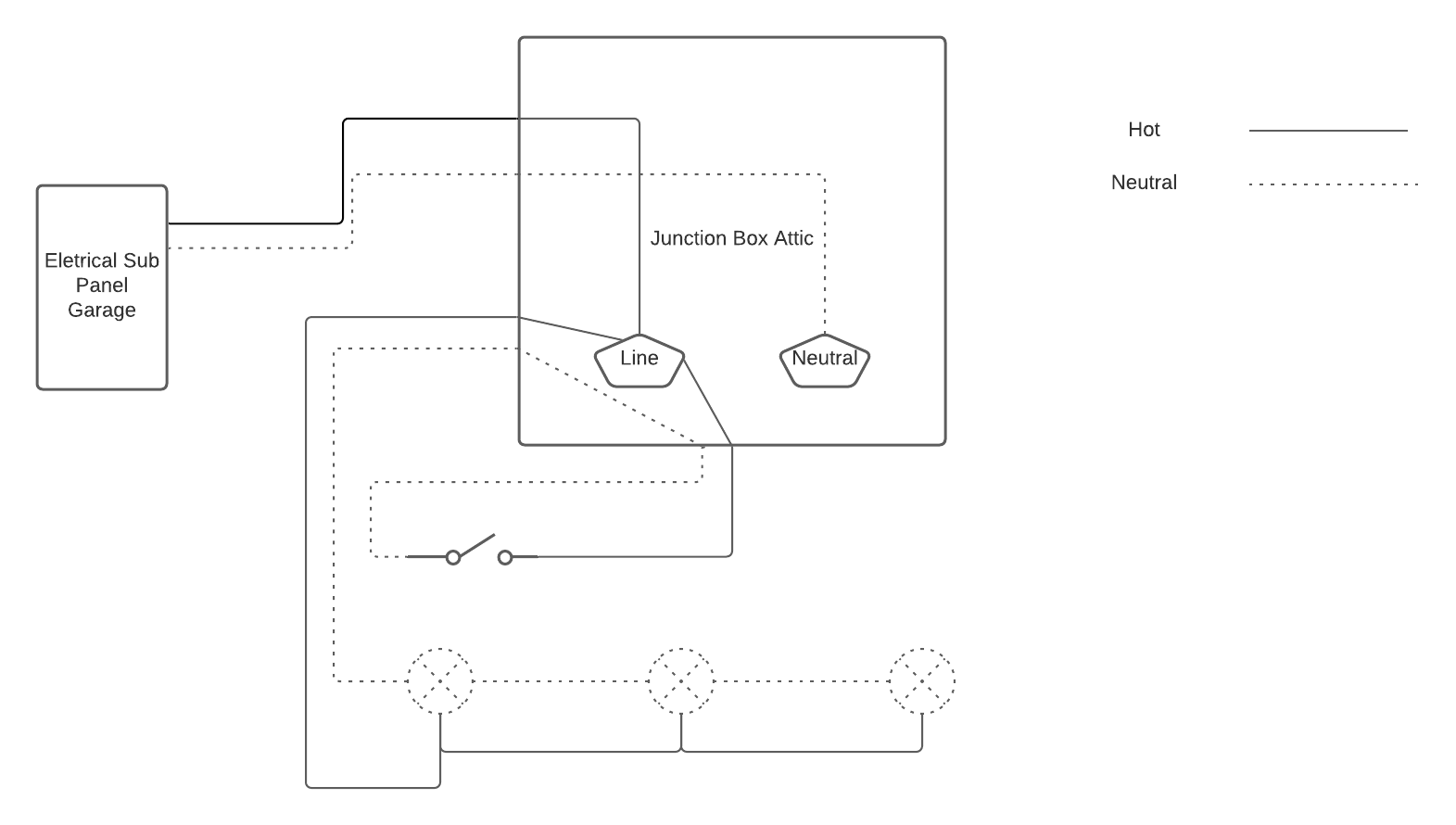 Here is another picture and I am wondering why the below wasn't done. My guess is that it will function but it requires more work because in this diagram I have to run a 12/2 wire from the closest lightbulb to the switch in the wall and another to the junction box. Was it not done this way because it is a waste of wire and time? 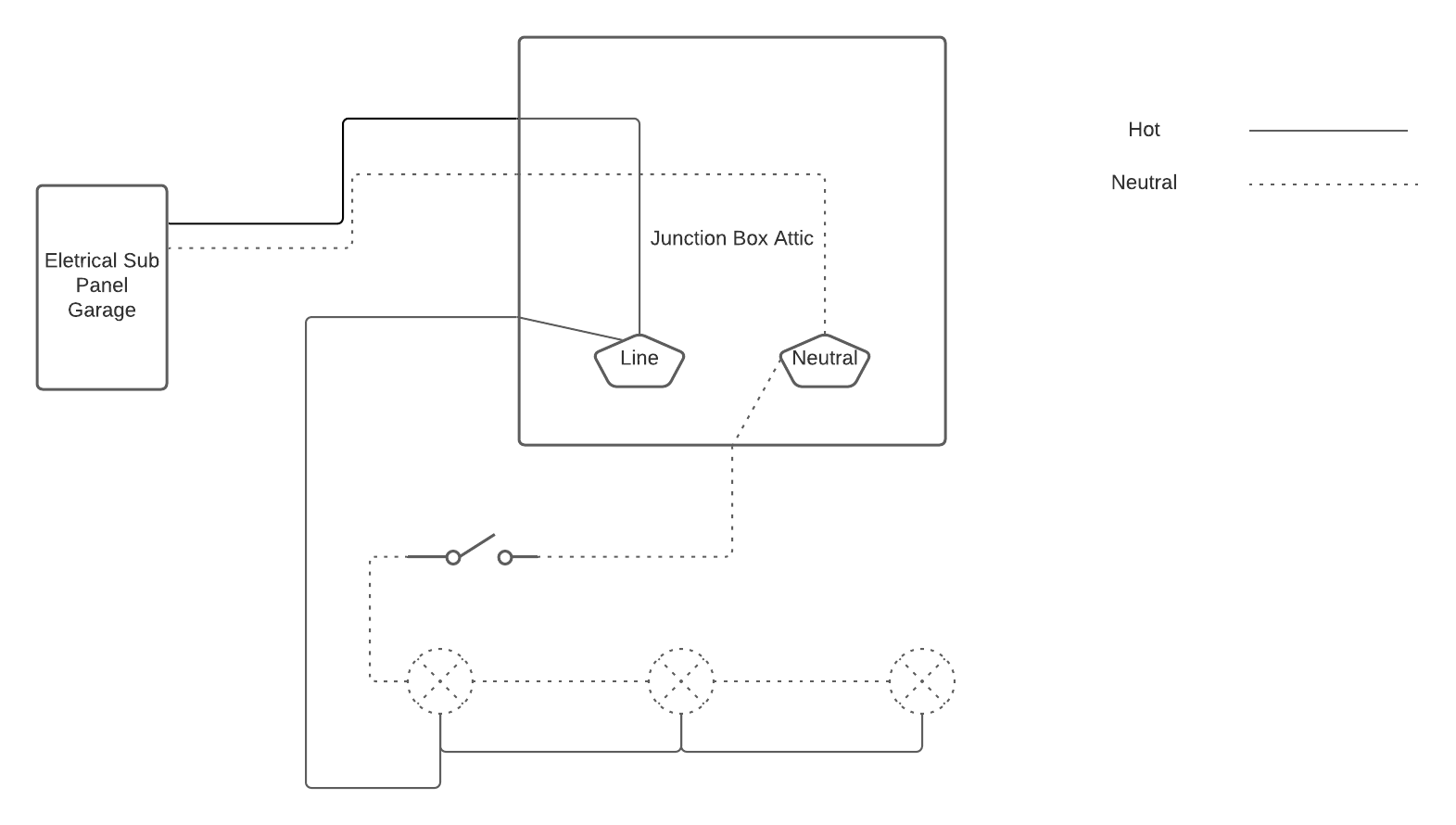 You might want to re check your junction boxes. Diagram 1 won't work. There's no return so you just looping a hot in a circle. The neutral with the black tape is probably part of a switch loop, which is OK when done right.

Diagram 2 technically would work but you can't/shouldn't switch the neutral which would leave everything hot in the lights. Neutral and line should both be in the same box.

Open those boxes in the attic and take pictures of them and the switch box so you know what's there since I think your thinking is wrong.

Your first drawing has an error.

Current must be equal and opposite in each cable or conduit...

that is to say, all the currents (polarity considered) must sum to zero. Your route would be a triangle, with each side of the triangle carrying current in only one direction - imbalanced.

The reason that's bad in AC is the same reason transformers work on AC - the vibrating electromagnetic fields (EMF) thrown by the wires. When equal and opposite, the electromagnetic fields cancel each other out, and it's not an issue. Otherwise the fields are trying to induce onto anything metallic. That takes energy which adds impedance which creates heat - either in the wires or the inductees. It also causes vibration, including in the cable, which can metal-fatigue and crack copper... narrowing the wire at the crack, causing localized heating and as it devolves, arcing which causes tremendous localized heating.

You also hear about people who have anxiety about EMFs - they may well be in a miswired house. Maybe humans can't feel EMF but animals definitely can.

In an AC world the idea of polarity may make no sense. It is because the system has been bonded to keep voltages relative to earth at sane voltages. The transformer holds the hots at a particular relationship to neutral. Neutral is called that because it is bonded directly to earth at the service point.

As such, if the entire system is fully assembled and working properly, neutral voltage is within a couple volts of earth, and so neutral isn't particularly dangerous. The hot wires are dangerous.

So we switch hot, so we are able to more-or-less fully de-energize what we are switching — again, assuming the system is working properly. If a neutral connection fails, all bets are off!

In a pre-NEC-2011 switch loop, where a spur cable goes to a switch, if the white wire needs to be re-tasked to be a hot wire, it must be the always-hot wire. It also must be marked with black or colored tape, but almost nobody does.

4
How can I wire this three-way circuit between two buildings with only 3 conductors?
4
Strange light switch wiring... why would neutral and hot be connected?
1
Can anyone explain this strange 3-way wiring? Trying to install a motion sensor switch
1
How is this 3-way switch circuit wired?
2
Wiring up a switch for recessed lights using only 1 ROMEX pair
1
Need neutral wire on "smart z-wave" wall switch - don't have one
0
Why would an outlet use a black wire as neutral
1
Why does my 3-way, switch looped light not work properly?