In my California residence say I have a 30A circuit.

I would like to be able to plug in "normal" household devices that typically use a NEMA 5-15 or 5-20 plugs.

I can accomplish this with an adapter but are there any code compliant receptacle configurations I can use which would not require an adapter?

Edit: This is for a location inside the house. Also I note the cynical comments about wanting to plug 20A devices into a 30A circuit. They are not very relevant since in asking for a code-compliant solution. For example code-compliant 15A receptacles are rated for 20A passthrough even though they are NEMA 5-15. So they will not melt when people plug in power strips and draw over 15A from them. Code explicitly allows 15A receptacles on 20A circuits for this reason. The question I'm asking is whether there are code compliant approaches with 30A circuits as well.

Specifically, this circuit powers two powerful plug-in subwoofer for a theater. I used a 10awg wire to run it. It's currently on a 20A breaker and has a 20A receptacle. Each subwoofer is on opposite sides of the mwbc.

I deliberately oversized it because large amplifiers can have high peak loads. The amplifier uses a NEMA 5-20 plug. I want to upsize the breaker from 20A to 30A to prevent nuisance trips for peak loads. But I know that i am not allowed to simply put a 20A NEMA 5-20 receptacle on a 30A breaker.

Hence my question: is there a code compliant receptacle solution that doesn't require an adapter?

You got off on the wrong foot to begin with...

because you started this whole thing with two serious Code violations. You thought those things were allowed, and because of that you think these other things should be allowed.

So let's reset and correct the mistakes.

Second, putting a 20A breaker on a 30A receptacle is a direct and blatant Code violation. Every breaker must match the receptacles on it, with only two exceptions enumerated in NEC 210.21. 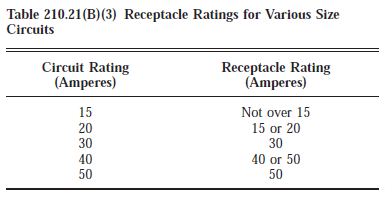 Neither fault should be tolerated. Don't use a NEMA 14-30 and adapter - use dual NEMA 5-20 receptacles wired in MWBC style (feel free to use two receptacles of 2 sockets each). Remember neutral must be pigtailed, you cannot use a receptacle as a splice point for neutral. Leave the breaker 20A.

Now, with those corrected, your ideas fall apart.

Code explicitly allows 15A receptacles on 20A circuits for this reason. The question I'm asking is whether there are code compliant approaches with 30A circuits as well.

I deliberately oversized it because large amplifiers can have high peak loads. The amplifier uses a NEMA 5-20 plug.

Well, you're allowed to do that all day, all night. You can always use larger wire than is mandated if you can fit it on the terminals. However, 20A sockets must have a 20A breaker.

I want to upsize the breaker from 20A to 30A to prevent nuisance trips for peak loads. But I know that i am not allowed to simply put a 20A NEMA 5-20 receptacle on a 30A breaker.

Hence my question: is there a code compliant receptacle solution that doesn't require an adapter?

Nope. No way around it, outside of using a sub panel or PDU, which is what you were doing if you used a UL listed adapter. Any of this defeats your concept, which is to have 30A over-current protection supplying your subwoofers and no 20A protection.

If you really need that, you should talk to your subwoofer supplier about subwoofers that are designed and UL Listed to take a 30A power supply.

Although rather than seeking a wild one-off design like that, for the same wattage, you would be better off seeking European 230V subwoofers designed for their larger 230V/16A circuits.

If the device (amplifier, speakers, etc.) is designed for a 20A circuit with a 20A plug, then that is all that should be needed. There are some occasional exceptions, but if any of those applied then they should be documented in the installation instructions. You are already using an MWBC, so you have 2 x 20A already. If you have more than 2 devices that each need most of a 20A circuit, add another circuit.

A normal, approved (e.g., UL listed) device for a 20A circuit will:

If a device needs more than 16A continuous, more than 20A for normal usage beyond startup, or significantly more than 20A even in startup, then you may need a larger circuit. But you can't do that on your own.

What are the specifications - peak and continuous power (Watts) for each device?

What, if any, recommendations does the manufacture make (in marketing or installation instructions)?

(A separate question is why anyone would actually need speakers that use that much power. But the question is valid because it could be tools or computers or whatever. But remind me to put in earplugs before stopping by your house.)

Regularly encountering tripping a 20A circuit feeding only one device, here are several reactions I have:

If that is the only breaker drawing a heavy load, your concerns are unfounded.

If all the other breakers are being loaded fully, say a panel that controls all the lighting in a commercial building, the NEC would call for an 80% derate for each circuit, which means 20 amp breakers serving 16 amps of lighting.

Breakers generate heat that makes them trip sooner. But it takes a whole panel of warm breakers...

2
Why are there multiple receptacles by amperage?
16
Why is it safe to use 15 A receptacles on a 20 A circuit?
3
What size GFCI and receptacles on 20A circuit?
3
Confusion regarding 2014 NEC
1
Can an RV exceed the "50% fixed load" rule?
1
Why would one breaker trip more than another under the same load?
0
Will I be forced to bring fridge and laundry circuits up to code?
7
Can I replace a single dedicated 20A/120V receptacle with a 20A/240V receptacle?
21
Why does US Code not allow a 15A single receptacle on a 20A circuit?
22
Is this correct? Welder suggests 15A outlet on 20A breaker, or 20A outlet on 30A breaker