What is your advice on repairing this PCB trace?

This is a PCB from an induction cooktop. It runs on 400v. This trace blew because the wiring was crossed during installation of the stove. Compared to the exacto knife, the area is quite tiny.

How would you rebuild this trace; with what sort of copper material....wire, strip, custom? Any help is appreciated because it will save me having to buy another induction stove. Thank you. 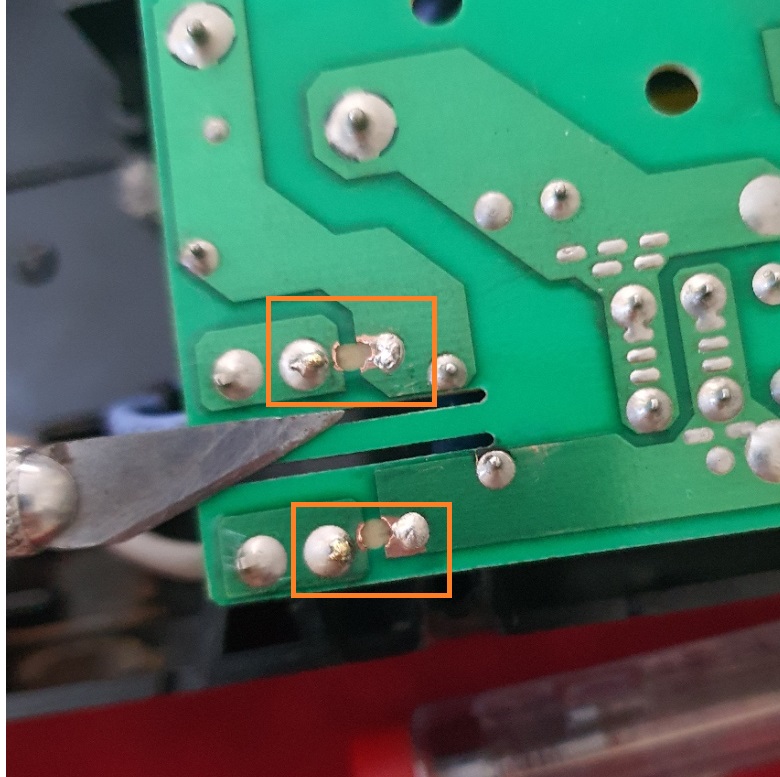 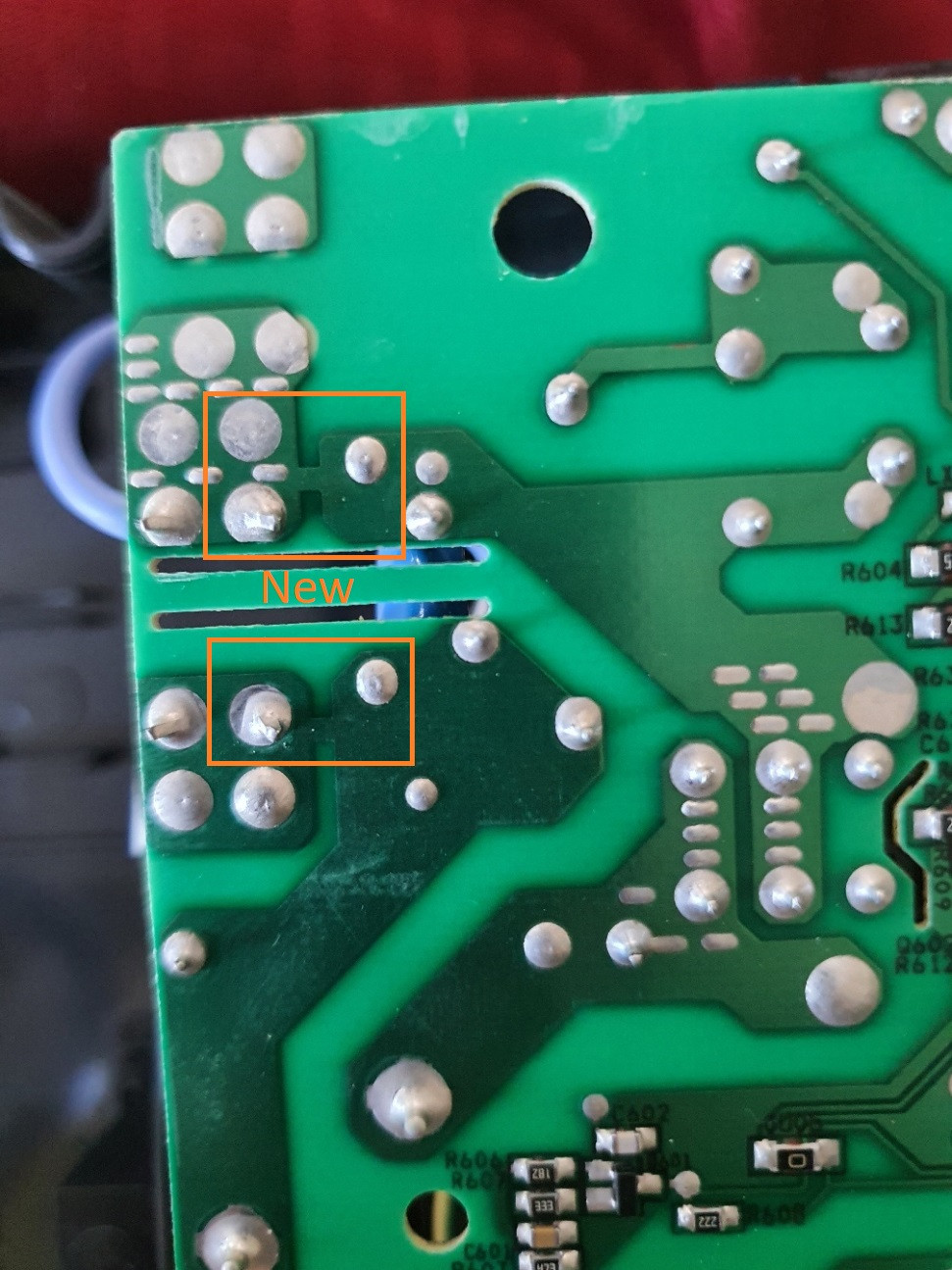 That trace there is a fuse.

Notice how that trace is much narrower than the trace on the rest of the board. Notice how it blew neatly when overloaded, and wasn't just random destruction all over the cooktop, thus causing least possible damage to the cooktop.

It's the world's cheapest fuse, but it's still a fuse.

I suspect this makes sense from a design perspective because it was never meant to be the primary means of over-current protection. On large appliances like this, the primary over-current protection is usually the same breaker as protects the wires - the one in the service panel/consumer unit. I suspect that a mis-sizing or mis-application of those might be a factor here.

Replace it by repairing the PCB per factory advice, or replacing entirely with a factory approved part.

You could solder heavy wire across it, to make sure it never blows here again, but then, it will just blow out somewhere else that is more destructive or more dangerous. And then you will need a new cooktop, or possibly, a new house. Or family.

I would get 4 or 5 short strands from 18 gauge stranded wire and pull them out of the insulation and twist them together. Tin them with solder and place them across the two terminals, hold in place with a small screwdriver and solder them in place. I would not use heavier wire because as Harper pointed out, those missing links are acting as fuses.

I would not recommend you doing this yourself as it's very high voltage and there are unknowns about the fuse sizes required.

Rather than debate the best way to bridge this defect, I'd like to highlight the question whether it should be bridged:

Some electronic components and devices fail "safely" and others fail "unsafely". Those that fail unsafely require a back-up mechanism to effectively achieve a safe fail. That trace may be precisely such a provision.

Consider, for instance, capacitors that can blow and short, or blow and open. Similarly, transistors & switches can fail by opening or by shorting.

Consider the similar question, whether a valve should break open or break closed? The answer cannot be provided in isolation; it could depend on whether it is for a gas line or a sprinkler system.

Back to the stove: that trace fuse may have been deliberately designed for that spot in the circuit. It blew because of a failed component or sub-system (a transistor, a relay, capacitor), and that component possibly failed unsafely. The fuse may have been specified there to prevent consequential damages: a further current surge (fire), an exposure to high voltage (electrocution), or an uncontrollable over heating (toxic fumes).

If it was human mishandling that caused a fuse to blow, and the cause is now removed, then replacing a replaceable fuse would be fine of course as a first attempt to repair.

But if the mishandling caused a different component to fail, as a result of which the trace blew, then jimmy-rigging it will only expose the user to the mitigated secondary hazards (fire / electrocution / toxicity).

The (e-)waste in such a catastrophic event pales against the e-waste from preventative repair or maintenance.

Given that this trace that blew was not marked as a fuse, take it as a hint that fixing the fuse is not to be attempted. Rather, the entire board and stove should be inspected by a qualified technician who is insured to take on the liability of a mis-diagnosis.

Of course I have to be the devil's advocate. Just scrape the pads and solder bridge it. But first check any big resistors that are mounted 1/4" off the board with an ohm meter. And also check your IGBT transistor. They fail when you whoopsie installation.

What load is it carrying ? Depending on that I would likely find wire to solder to the two largest common terminals on either side of the break. 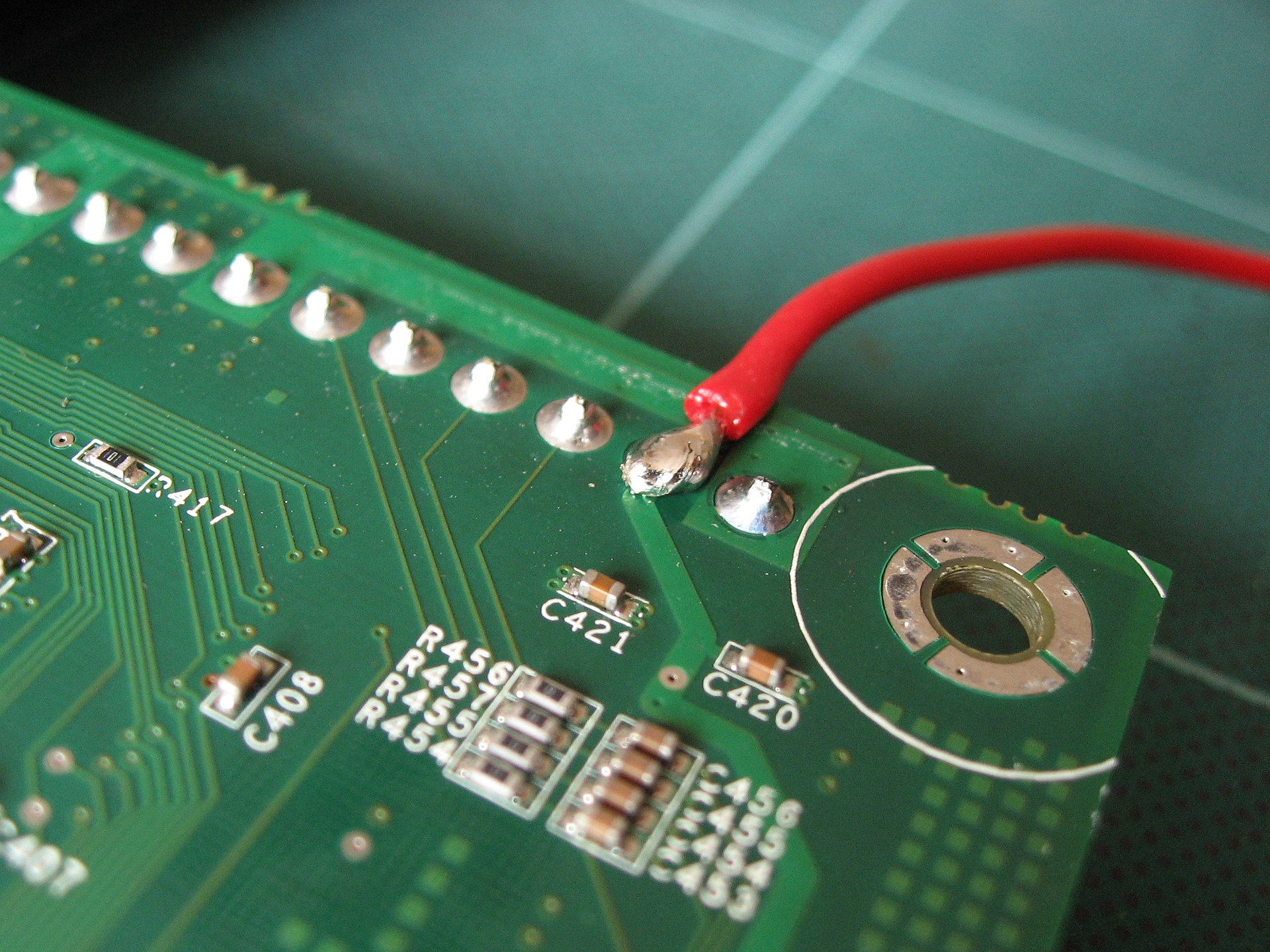 so a single strand of tinned 32AWG is what I would use.

Replace with the internal metal strip of an actual properly rated fuse.

As mentioned, those were acting as a fuse, so you should replace with a properly rated fuse and not remove the safety feature by solder or wire bridging it. It's easy enough to buy a few glass fuses at the hardware store and either retrofit the fuse with a fuse holder or dismantle the fuse to get the "fuse metal" and solder that across the terminals. At least if this happens again, the fuse metal will melt as the PCB trace did.

edit: The question is how do you determine the original fuse amperage accurately? As @LShaver mentions, it may not be the total appliance load. Take the wattage of the appliance, divide by 400v to get the amps, add 1.5x to 2x headroom to get the fuse amp rating.

I would simply use two single 22 gauge copper pots (plain old telephone system) wires soldered across the burnt trace area. Simple is the best way to go about these repairs most every time my friend. That said, I would carefully test to see if that restores complete functionality. If not continue trouble shooting. If so, then carefully test the repair through the range of the stove's functions to determine if there is any need to strengthen the bridged trace.