When the furnace was originally installed, the first floor of my house had four cold air returns, two each on the long walls. When the kitchen was renovated in 2015 (before I purchased the house) some ill-conceived changes to the HVAC were made, including the removal of the grate for the cold air return in the kitchen, meaning the first floor is now served by only three (despite still having four supplies).

There's now a roughly 10' section of cold air return ductwork that is essentially a dead-end. Will this cause any issues with the functioning of the system? Should I block where this connects to the main return trunk? One of the challenges with the system is that upstairs there are only two supplies and one return, and in the summer it takes a long time for the second floor to cool off.

In the image below, the blue lines show current/active cold air returns, going back to the furnace (blue square). Red is the one that is abandoned in place. 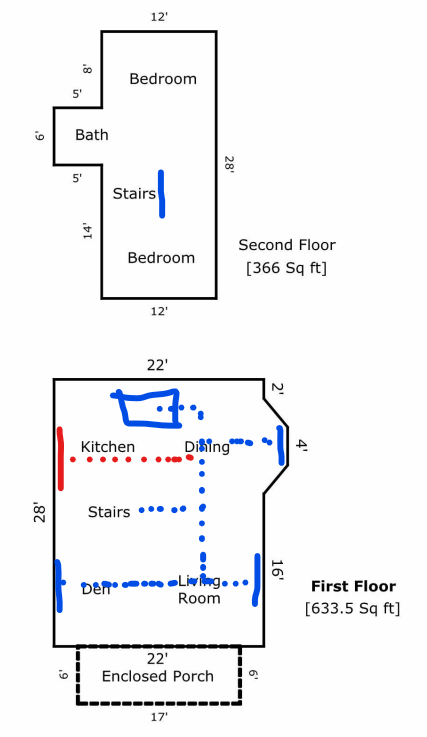 Blocking this off affects the air distribution for that section of the home. I would want to make it functional again but if not possible at this time leave it as is because when a bad winter hits and the zone is not evenly heated you may decide to open it back up. It will not hurt anything being blocked off and more than once I have gone in and reversed a diy change that negatively affected the home comfort.

3
180º/gooseneck/u-shaped cold air return?
0
Why is my booster fan pulling cold air from outside?
3
How to address loud cold air return
2
Should I block my basement air returns to better cool my top floor?
0
How big of a duct and grill do I need for a central cold air return on a 3 ton system?
0
When adding an air return to the basement for the sake of habitable space, what considerations should I be making?
0
Replacing 1-Stage Furnace & A/C for Comfort & Efficiency
2
3-Story House Balancing Questions - Duct Traverse done with data