I have some 220v outlets that are pushing 246v. I need them back in the 220-240 range in order for a manufacturer to do some warranty work on the printers running on those outlets. I've been looking into automatic voltage regulators and just end up confused as I don't know much about power.

Each printer requires two 220's and up to 4kW while running. My main concern is whether I'd need a regulator for each outlet/plug from the printer or if I can buy a single regulator per printer and have both plugs on it. And that this is even the right course of action to deal with higher than expected voltage from an outlet.

What the heck happened to US electrical power?

However, as the system loaded up, it became apparent Edison needed to deliver more power. So Edison told all the light bulb manufacturers "Make your bulbs for 105V". After a year, Edison bumped the DC voltage to 105/210V.

Then Edison told light bulb manufacturers "Make your bulbs for 110V". After a year, Edison bumped the DC voltage to 110/220V.

And then, Edison/GE lost the War of the Currents to Tesla/Westinghouse.

Westinghouse said "What do we do with all this +110/0/-110V DC infrastructure now in place?" Tesla said "Leave it. We will choose an AC voltage that will make the bulbs the same brightness and do the same work". Which they did; 110xsqrt(2) peak, or 110V "RMS".

Now that that distribution transformers were easy, it now became feasible to sell electricity to the hoi polloi, and industrialists like Samuel Insull (the Jeff Bezos of the age) set to the task. The sales messages were everywhere -- get yourself electricity! Your 110V/220V is waiting for you!"

It was the biggest technology rollout in the history of history. So the sales and marketing campaign was HUGE. It made "110V / 220V" a household name.

Of course, the AC power companies realized the same thing as Edison, and called up the light bulb manufacturers and said "Please start making your bulbs for 115V." And the manufacturers said "we know the drill".

And then some time after, "120V" rinse wash repeat.

And then World War II happened.

And the light bulb manufacturers said "Yeah, yeah, 125V". And the power companies said "We didn't say anything, we're fine at 120V. Actually... yeah, do that."

And there we sit today.

But of course, thanks to that 100 year old marketing blitz, "110V/220V" has taken on the character of "Xerox". It's just a household name, and has no reflection on reality.

US/Canada AC power is actually targeted for 120V/240V, with a wide tolerance. 246V is well within that tolerance.

If your printer manufacturer can't tolerate 246V then they cannot sell in North America.

One way to deal with this situation is to use a transformer. Transformers can step AC voltage up or down (among other uses). Note that a transformer does not regulate the voltage; it merely multiplies the voltage by some factor. A "multi-tap transformer" allows an electrician to pick among a set of step-up/step-down ratios according to the need. 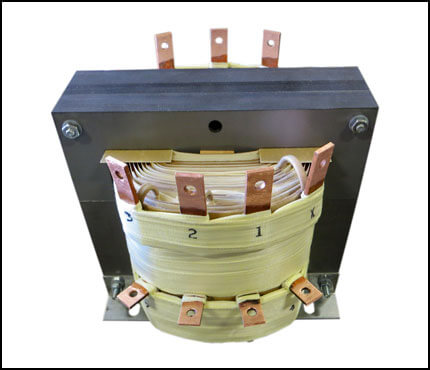 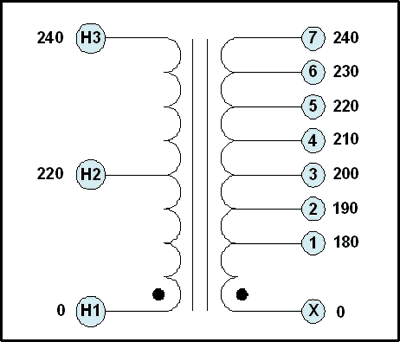 It may also be worthwhile to have a conversation with your utility supplier. If you're a commercial consumer and are the only customer attached to the transformer that feeds your building, it might be possible for the utility to connect you to a different tap or to use a different transformer on their side so that your entire service voltage would be a little lower.

Or... you might just rent a towable generator for a week or two to temporarily power the printers in a way that satisfies the manufacturer's warranty work requirements..