16" on center framing spacing corner - optimize for butt- vs by- wall, interior vs exterior panels?

newbie framing question here. Haven't done any framing myself yet but I'm planning to do some and educating myself. This is a pretty theoretical question so all theoretical or practical experience is greatly appreciated. Pretty sure I'm going to get a lot of people saying I'm overthinking this, but that's ok, I'm curious :).

Most references I see for from say to space studs 16" on center. In the simplest case the first (2x4) stud is placed butted up against the end of the plate. All subsequent studs are positioned such that their centers line up with the 16", 32", 48" etc. marks on the tape measure along the plate.

Note that because of the thickness of the studs the space between the first two studs is actually 15'-1/4" = 16'-3/4", where 3/4" is half the thickness of a 2x4. This configuration ensures that when a 4'x8' panel is installed on the frame the panel will overlap a stud on both ends.

This story pretty much makes sense to me. My question is about how the story changes when you consider two walls butted up against each other and want to optimize both internal and external panels (such as interior sheetrock and exterior siding).

If you follow the prescription above I think you get the following result: 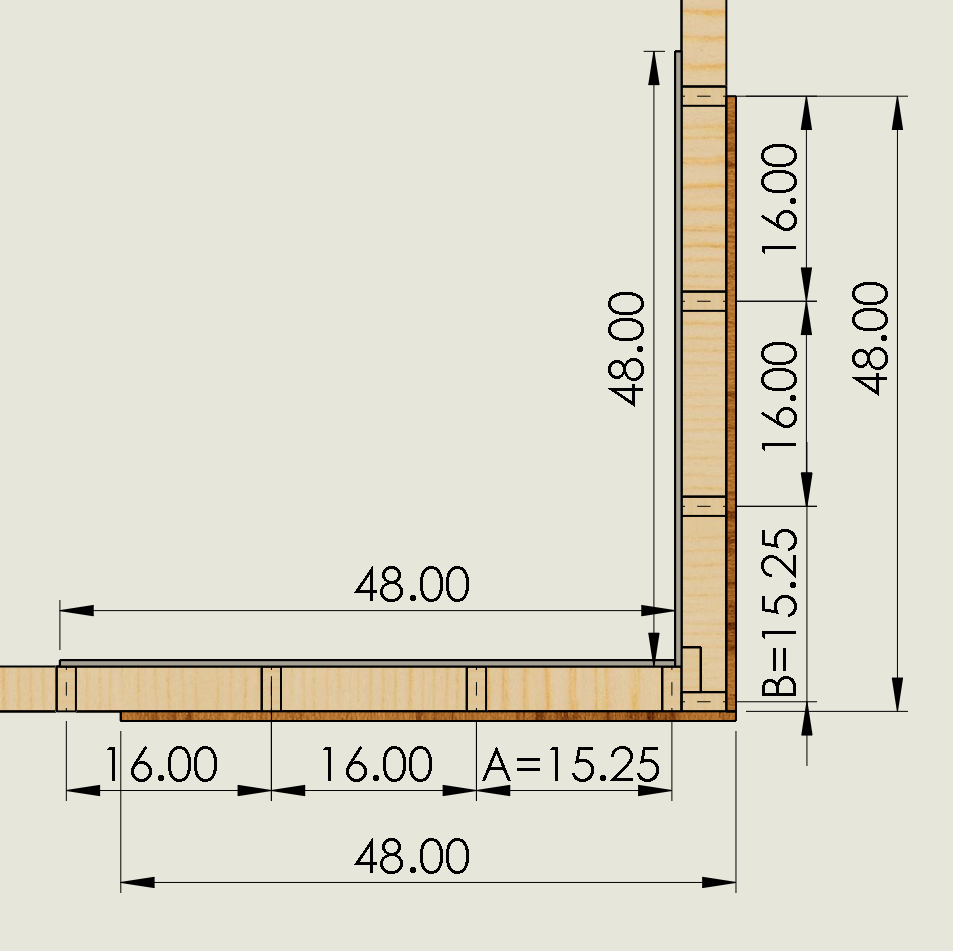 Here the wall on the right is a "by-wall" or "through-wall" in that it goes through to the end of the structure and the bottom wall is a "butt-wall" in that it butts up against the "by-wall". The studs are spaced exactly as above, 16" on-center. The only addition is a "nailer" stud on the through-wall near the corner so that there is something to which to attach the interior paneling. For reference the interior panel is drawn 1/2" thick and the exterior is 3/4", but this could of course vary and that might affect some of the dimensions I've shown?

However, we can see that not all of the panels line up with studs. The big problem is that the interior and exterior panels come to very distances along the walls. For the butt-wall at bottom the exterior paneling is shifted right of the interior paneling because it has to overhand the plate on that wall by at least 3.5" to enclose the edge of the through-wall.

I’d keep the exterior side of stud spacing at 16” module and let the interior adjust as necessary. There’s two reasons for this: 1) cost, and 2) appearance.

Summary: Start from the corner and measure out 16” to the center of the first stud, then continue at 16” on center. That way you’ll use a full sheet of sheathing at the corner. Often contractors will measure out only 15 1/2” so the siding laps good at the corner too and covers the sheathing.

Like Lee Sam, I'd frame in a way that optimizes for placement of the exterior sheathing. It is usually placed oriented vertically, ie 48" wide whereas drywall is usually placed horizontally, ie 8/10/12 feet wide. It just makes more sense to shorten sheets of drywall (they're all going to need to be cut anyway) rather than to cut the sheathing narrower.

I approach wall layout based on measuring and marking for stud edges so that I don't have to spend time/thought trying to center things.

My drawing below starts out like yours. I'd frame that right-hand wall first by doing the following:

My drawing differs from yours in the second/lower wall: I make that right-most stud bay extra-narrow so that the corner and the rest of the wall come together nicely.

Before drawing anything I think about how I want this wall to fit with the first wall. At the right-hand end of this wall I want a full 48" wide piece of plywood to be flush to the exterior face of the first wall. I also want the left-hand edge of that first sheet to fall on the center of a stud. I'll need to offset my measuring tape to account for 0.5" of sheathing thickness plus 3.5" of stud thickness plus 0.75" of half-stud width: a total of 4.75". I might cut a scrap block of 2x4 to that size and use it as a spacer (this house or whatever I'm framing will have at least 4 outside corners; I'm going to need this same offset for every one of them!) or I might just clamp the tape to the pair of wall plates at that offset.

Top and bottom plate layout is as before: 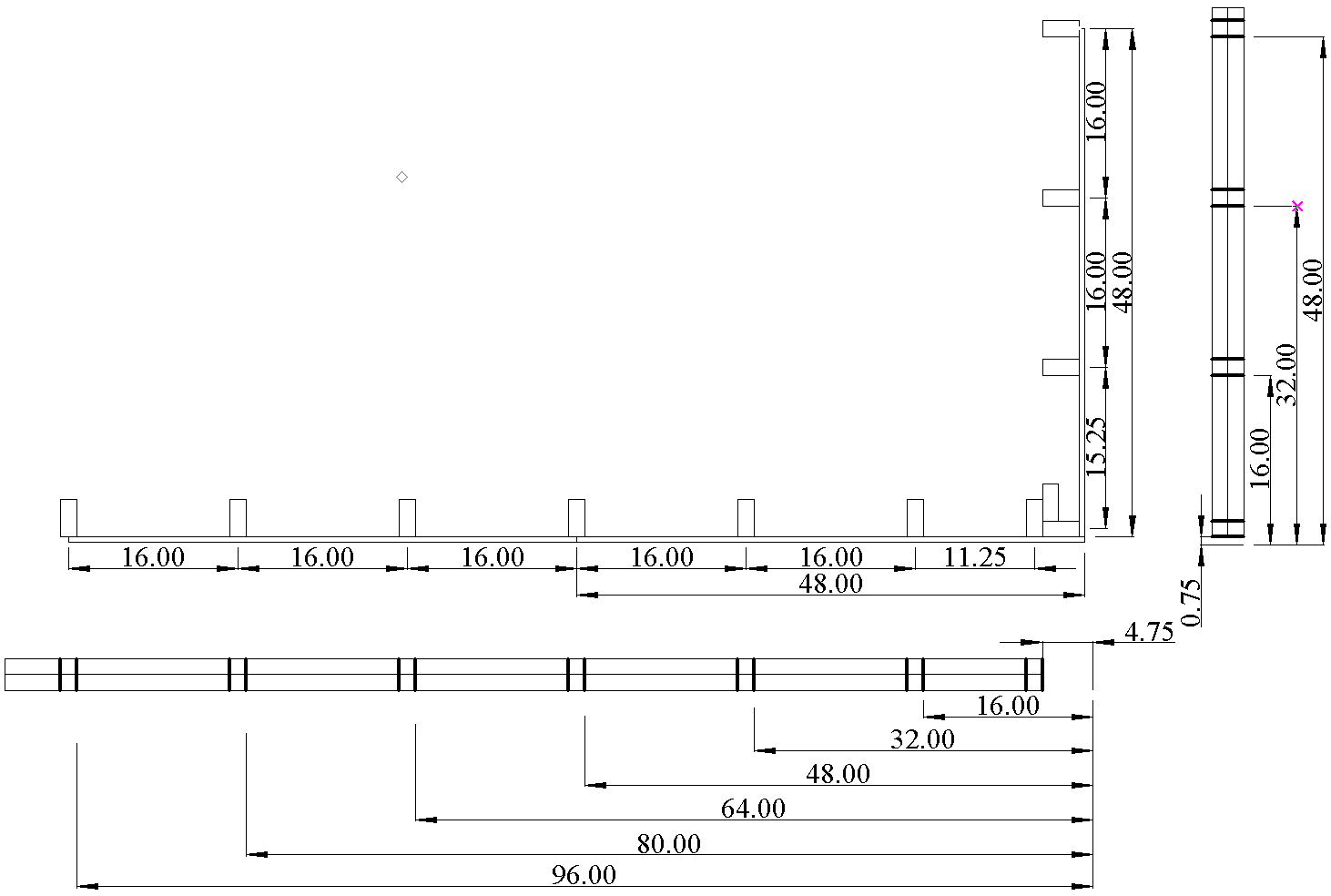 7
Do I need to remove existing drywall before framing an interior wall?
1
Framing Exterior Long Wall in Sections
2
Installing a wall vent when stud blocks the opening?
2
Exterior wall framing - Safe to remove 2x4 that was part of soffit/bulkhead?
1
Sideways king studs!
1
Do I need to plan my framing depending on the position of the wall to glass clamps for a frameless shower?
3
Studs spacing too close together to put in sub panel in workshop basement