How can I eliminate wobble in my surface-mounted deck railing posts?

The 4x4 posts for the railings on my deck are attached to the surface (2x6 boards) using plastic post anchors with lag screws rather than going through the surface and attaching to the joists. The ends that attach near the house and by the stair railings feel fine, but towards the center (about a 20' long deck) it's a bit wobbly. Posts are roughly 4-5' apart. Is there a way I can reinforce these posts without replacing them with longer ones and attaching them underneath the deck like it should have been?

Don't have any pics of the deck on hand (I'm at work), but these are the anchors attaching the railing posts onto the deck.

Deck is built on a significant slope and ranges from 2' off the ground to about 6'. 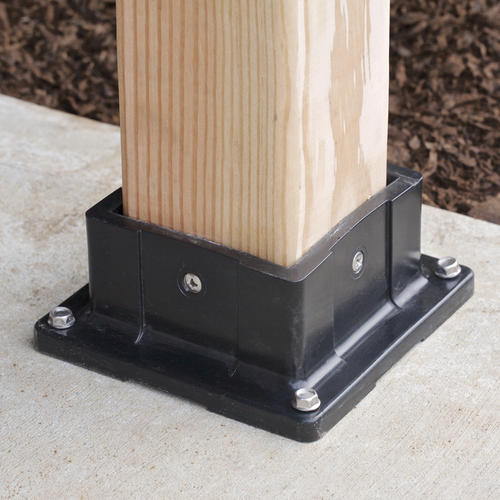 Suggest replacing the existing post base connectors with this one, which is made from steel, and considerably much stiffer than what you have now. 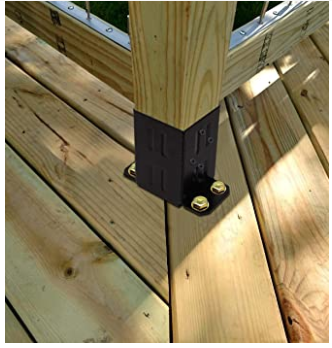 A diagonal brace from corner to corner would be ideal.

If that interferes with your in-fill panel, then two smaller braces in the corners would work adequately. Simple 50x50 / 2" square outdoor-treated timber would would be sufficient, and brace can be recessed from the edges enough to make it harder to see. 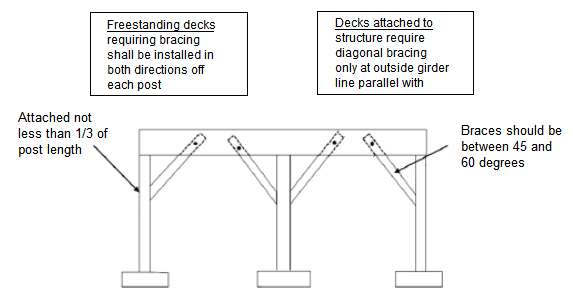 image is for deck supports, not a railing. You can probably get away with smaller braces than 1/3.

Downside, its another surface to catch dirt, and will need paint/stain/protection. You'll also need to do accurate mitre cuts.

Ultimately, you're working to compensate for a poor initial design. Whoever designed this needs to stop doing it like that, and run the railing support down through the deck and into something more solid.

Your image shows a concrete pad, with bolts. In that instance, there's no good way to embed a post into concrete after the fact, so its the best of some bad options. That someone has used the same footer on wood means they didn't think it through.

And PLASTIC ?? That product really should be powder-coated steel. Cheap plastic is unsuitable as a structural component of anything.

Can you avoid replacing your newel posts?

As you've implied, the right fix is to plunge the posts through the decking and mount them securely to the framing. It's understandable that you don't want to do that now, but it's probably worth doing. Heavy duty post bases are fugly and probably too tall, and they still won't give you a truly solid feel. There's just too much torque on them when dealing with softwood.

The good news is that you may not need to do them all. If your top railings run through, or if you're willing to add a stiffener (say in the form of a flower planter), you could get away with doing just one or two on each long run between corners, where stability is somewhat inherent.

If you've already decided that this is how the railing will be mounted and you just want to make it less wobbly, add braces similar to this: 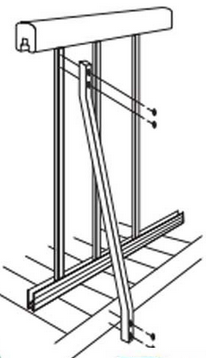 One idea, not sure how great it is but it fits in with your constraints. It might not be possible for every post either.

The basic idea is to drive lag bolts (screws) from the underside of the deck and pull the posts down tight against the top of the deck. You'd want fairly large screws (I was able to find 17" lag screws once) and you would want to be sure you drill a properly sized hole to prevent splitting the post but not so large that the threads don't hold firm. I think you'd want at least two screws per post arranged perpendicularly to the direction of concern (outward, I take it.)

Holes drilled through the deck and post holders (if necessary) should be larger than the outer diameter of the threads. You want the screws to pass through freely.

The post holders should stay as noted in the comments. That would help prevent small movements from deforming the deck or the posts.

Underneath, you would need some sort of plate. Otherwise, the screws heads will tear through over time or catastrophically.

The key here is to pull the posts down tight so that the force from leaning on the railing is transferred to the plate and spread out to the bottom of the deck surface. One hitch is that if you do a really good job at this, you might destroy the plastic base. 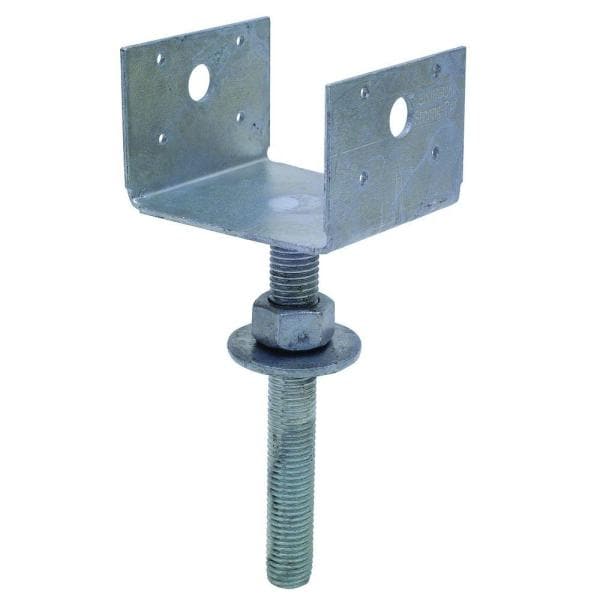 These are designed for concrete but you could put blocking underneath the decking (attached to the joists) and secure them to that. You'd want to orient it so that the 'wings' on top are parallel to the railing.

It's basically the same idea with a couple (possibly crucial) differences:

I think this is a lot better than my original suggestion. A lot less work, maybe less costly (?), and far more secure. You might want to spray paint them with an appropriate product for better aesthetics.

Not sure this is optimal but I think it's better that what you have now. Also, after you price the hardware, it might not be worth it compared to getting longer posts. And honestly, isherwood's answer is the right way. If this deck is more than a few feet above the ground, I would definitely suck it up and fix it properly and if it's not, there's still risk of injury.

8
Can I use 4x4 posts as the primary support for a deck?
0
How can I attach a 2x to a deck joist to give more room for stair stringer?
2
How Can I Correctly Attach new 4x4 Deck Rail Posts on the surface to an existing deck?
2
Extending 4x4 Deck Posts
2
How can I repair this leaning deck railing?
0
Is my plan for replacing 4x4 deck posts with 6x6s reasonable?
1
Vinyl Fence on Deck - How to stabilize or strength the Post Support
1
Where should I put the railing post in my deck design?