Almost completed the updates. I cut the wire short on the GFCI attached to the panel, therefore I had to connect the bare ground to the neutral bar. I still need to find a 1/2 inch weather box to replace that old one, then I’ll re-run the wire correctly. I also ran short of UF to completely replace the Romex, so when the rain stops I’ll finish that portion.

I determined today that the yellow Romex lines are going to the addition built on to the Mobile Home. I believe one is for the 4 ceiling fans, 1 is for the bathroom light/GFCI outlet and the other is for the main room outlets (6 in total). Question, can I run UF-B from the main panel to somewhere under the addition and tie the UF and Romex in together within a junction box??????

The panel is a Square D RC12L200c Meter Main

Besides being messy looking, does this look alright? 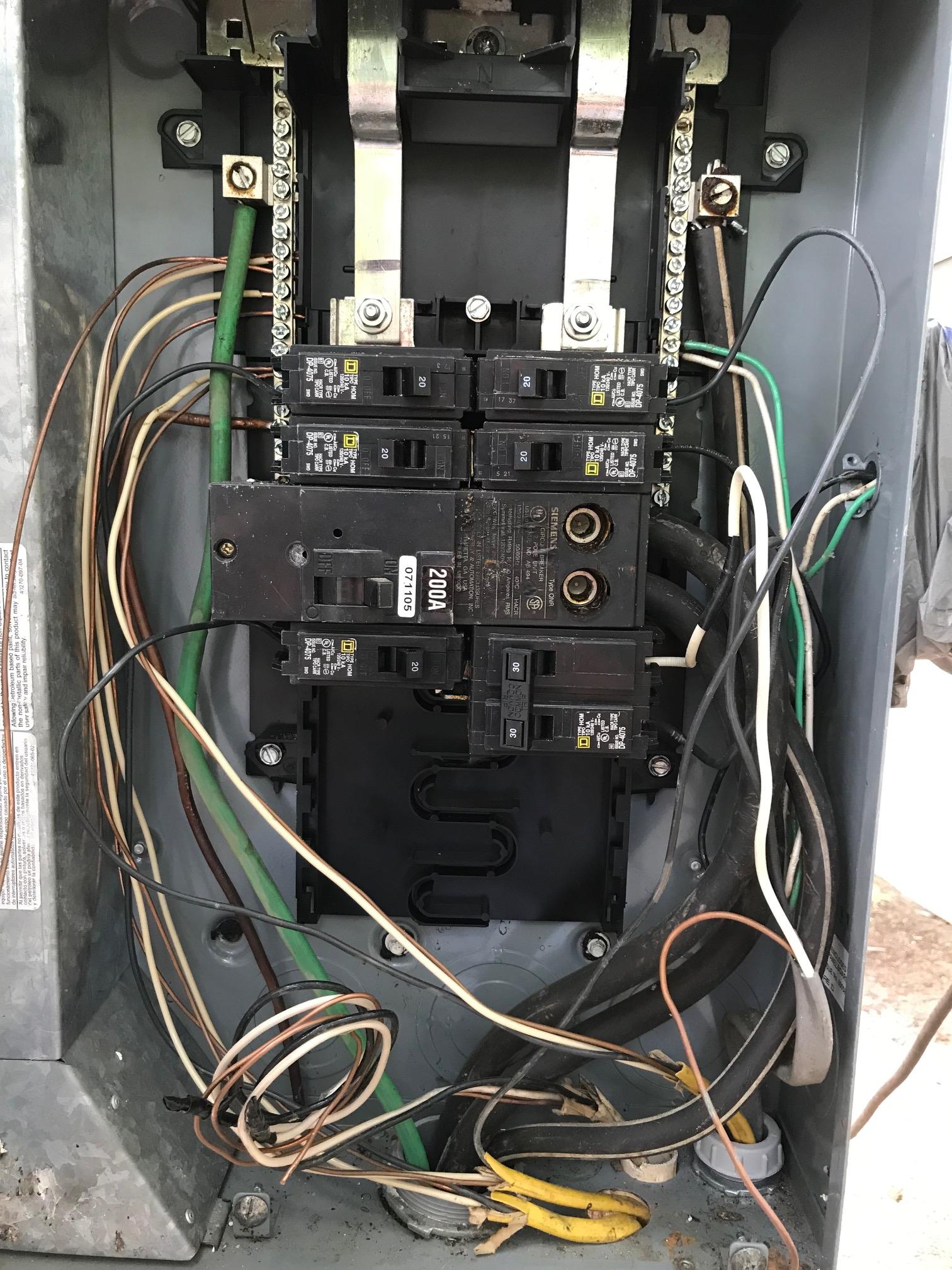 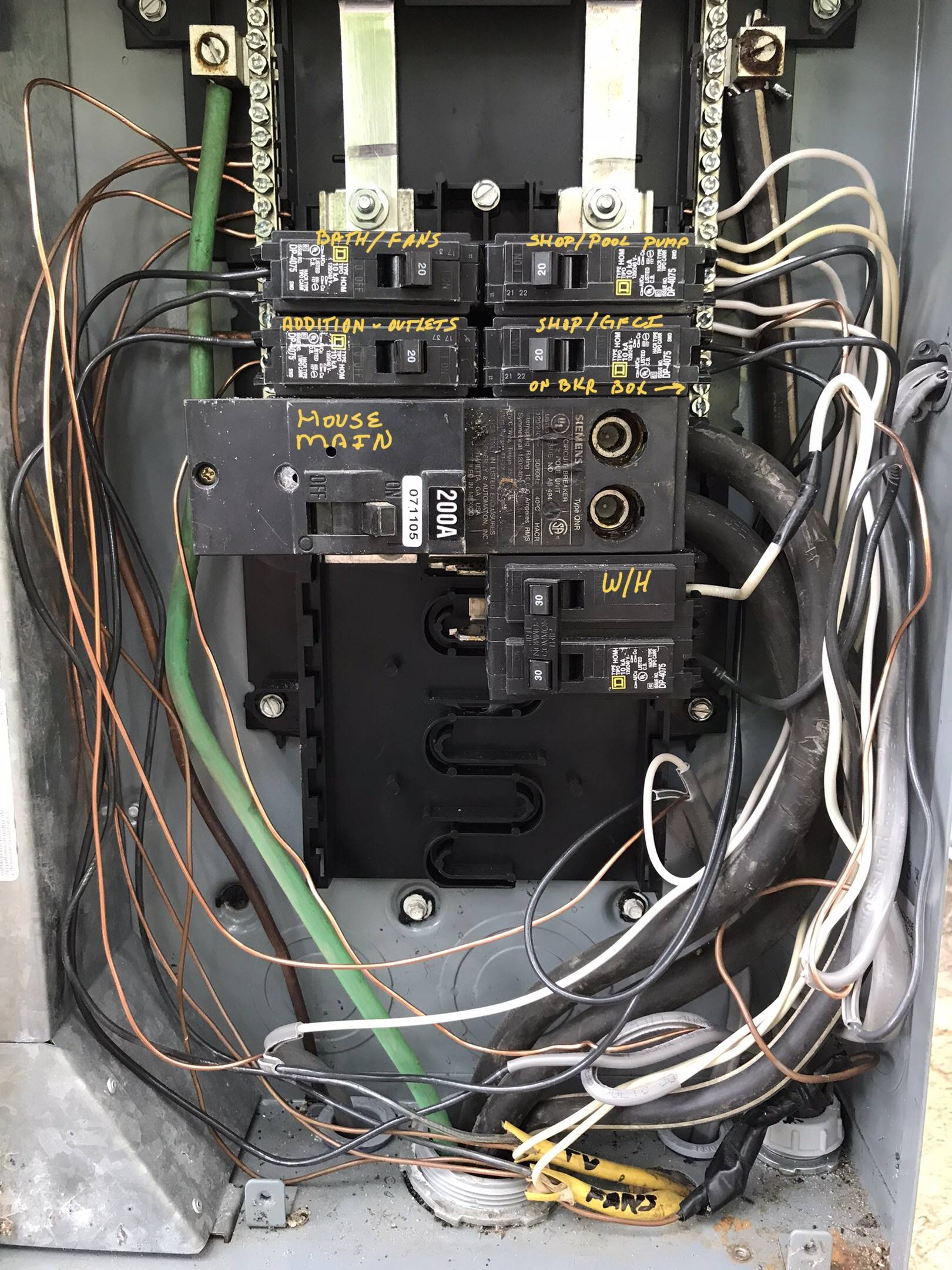 That 200A Siemens QN(R) breaker visible in the center of the photo has no business whatsoever being in a Homeline panel such as yours. You'll need to replace it with a HOM2200BB and rearrange the other breakers so that you have four free spaces on the bottom right for it. This also gives you a LK225AN you can mount on the lower right-hand neutral bar so that you can cut the neutral wire (aka the black wire with the yellow stripe) and re-strip it to get a fresh set of strands, then fit it into the new lug.

While we're dealing with breakers, this panel has one too many handle throws in it at the moment; that's trivially dealt with by replacing one of the top pairs (left or right) of HOM120s with a HOM220.

As to other matters...

I noticed that you have several NM cables that appear to be exiting this outdoor panel and heading somewhere that isn't immediately inside. Those cables will fail on you due to the paper wrappers wicking water, so it's best to replace them with either UF cables if they're running free, or with THHN wires if they're in a conduit instead. (There's also what appears to be a UF cable in one of the conduits that should go as well, as that conduit's likely overstuffed as a result.)

Atop that, it appears that whoever installed this used a PVC plumbing pipe for electrical duty, shoving the end of the pipe through the hole instead of using a proper adapter fitting while they were at it. This is no good at all, and needs to be torn out and replaced with a proper conduit run with proper fittings.

Finally, the surge protection device(?) attached to the right side of the panel needs to be examined for proper watertight installation, as I don't know what is going on there, and the conduit entering the box bottom center needs to be fitted with a split conduit bushing of the correct size so that the wires don't abrade against the edge of the conduit.

I see several issues on top of the cut down neutral that Jack noticed.

As this is truly the main panel the white neutral and grounds can be intermixed. I am not sure but on each side it looks like a ground and neutral are under the same screw. It would be ok to have multiple grounds on 1 terminal but it is never ok to have more than 1 neutral, they are by themselves (not sure, they both look really close).

Although I don’t see a main bonding screw or bonding jumper it may be there. The main panel the grounding buss and neutral buss are required to be bonded.

I cannot see the feed from the meter but believe it to be from the bars above and the 200 amp breaker being the breaker for a panel inside the home (this is a common configuration,

However if that buss is the feed from your meter this violates the rule of 6.

There can not be more than 6 movements of the hand to kill all the power you have 7 now.

The rule of 6 can be restored by adding 2 handle ties to the upper breakers. There is nothing wrong having ties in adjacent breakers and they do not have to be MWBC’s as is common with handle tied breakers.

the Unused circuit (wires) in the bottom should be tagged for what it’s use is and to be “neat and workmanship like” as code requires. the bundle should have some zip ties or tape holding it together and that bare ground from possibly finding that hot buss above.

Clamp with missing bar on the right and the sheath not entering 1/4” past the clamp as required.

No insulating bushing on the fitting that the conductors exiting the panel from ghe 200 amp breaker.

More than a few violations but in reality all are easy fixes.

Just a few things I noticed: your neutral has a few strands cut away to fit in the lug, not good. Your white neutrals should be moved over to your neutral bus bar, right side, and your ground wires, green or bare copper, should be mounted on the left bus bar. They don't have to be but might as well since you can. You need some protective bushings on that cable coming in at the right, and the two at the bottom.

Per the data sheet you may install no more than six branch circuit breakers. You have seven so you’ll need to consolidate or pare down somehow.

The 200A breaker for inside probably is not appropriate. Breakers must be specifically listed for the panel. The Square-D info indicates the appropriate type would be a HOMA, and the Siemens info only mentions the QNR being suitable for Siemens panels.

Aside from the alien breaker problem ThreePhaseEel mentioned, and the neutral wire chew-down JACK mentioned, I see a couple more problems.

You have 7 throws to turn everything off, as 'nobody' mentioned. Ed Beal has a visionary solution of putting "handle-ties" on the top 4 breakers... but unfortunately that won't work because of this line in the literature:

You have seven. So your only option there is to buy two "2-pole" 20A breakers (QO220) and replace the top 4 breakers with those. It means those circuits will have common trip now, so if one overloads it knocks out the other. If the pairing of the circuits makes that inconvenient (table saw, and shop lighting!) then switch one of the hots with the other breaker.

You can do that because you have extra length on wires (which you referred to as "messy"). No, messy is having a bunch of wire nuts because you had to extend wires.

I say do both of them so you now have five, so you don't have to think about the problem again when you decide to fill that last space.

(and no, not six quadplexes (18 hand throws) -- the literature forbids tandems and quads, so don't go thinking you can start double-stuffing this panel when it gets full. This type of panel is not for that!)

The main reason we care about obsolete and dangerous "Rule of Six" panels is that it's all too easy to overload them. When they were legal, the argument was "there's no need for a master circuit breaker; the home is protected by the Load Calculation that determines the home is unable to draw too much, and any overloads will be occasional and transient".

(Of course, this was a conceit; the real reason for Rule of Six was that >60A breakers were prohibitively expensive at the time. That is no longer the case.) *The point is, this scheme depended utterly on the homeowner doing another Load Calculation every time they added a load. As you may guess, that never happens.

So what's going on in this panel? You have a 200A breaker feeding a sub panel, and if that were the only breaker in this Rule of Six area, that would eliminate the safety problem! However, we have more:

So I count 270A and 290A of breaker trip on the two poles. Now I'm not saying the 200A breaker should be changed for 100A (giving 170A and 190A) -- after all, some oversubscription is tolerable, because it's statistically unlikely all those breakers will be maxed out at once. But certainly, grafting them on top of 200A with no derating at all is too much.

So since you need to replace the large breaker anyway because of the alien idiocy, I would suggest replacing it with a 150A breaker. That will leave 50A of headroom for those various breakers to share.

Another way to do this, since most of the hillbilly-installed Romex must be replaced anyway, is to install a new 200A main-lug sub-panel right here. Reroute all those circuits (the five 20A and the 30A) so they are in the new sub-panel. At that point, the 200A breaker will be the ONLY breaker in this "Rule of Six" panel, eliminating the safety problems of Rule of Six panels altogether.

There are two ways to get power to this new sub-panel.

Second, you could get "double lugs" for the new sub-panel. Use those to daisy-chain from the meter-Rule-of-Six panel... to the new sub panel... to the original interior panel. Both panels are rated for 200A, and they're both protected by a (the same) 200A breaker, so they are fine that way.

Third, oh, this is the best one, for cost and versatility!!! -- You know that "Alien" 200A Siemens breaker that we have to get rid of? Make sure the new sub panel is a Siemens brand. It's not alien there! That will save us the price of two double-lugs. And one more thing: wire this from the meter-main to the Siemens breaker, so the Siemens will now be "back-fed". Then wire from the subpanel's main lugs to the interior panel. This is "backwards" obviously, but this way, we can simply install a generator interlock between the fat Siemens breaker and the generator breaker, and switch this sub panel as well as the house's interior panel. "Better and better!"

"But wait, under this "Best" option we will have a brand-new 200A Square D breaker One Foot Away from a 200A Siemens breaker. Why do we need 2 breakers? Can't we just forget that expensive and scarce Square D breaker and use a sub-feed lug kit and run totally un-fused power One Foot to the new sub panel?" Maybe... that would make sense. That is a question I would ask your AHJ. (local code inspector). It is their final call. My advice there would be to use a metal conduit nipple between the two panels, as that will carry safety ground and make it look pro. PVC between panels is the mark of the amateur.

7
Rewiring house and replacing breaker panel. Wiring layout and breaker selections
2
Updating sub panel in shed
0
Wiring from basement main panel to garage
0
Moving main service breaker panel lower on wall exposes feeder wires non-sheathed
2
Hot Tub/Spa 70A Subpanel/Electrical Disconnect Box Wiring
0
Seeking advice on how to rearrange existing breakers and add 2 circuits, including a 20A GFCI/AFCI breaker in a split-bus GE panel
1
Main panel to subpanel part inside, part outside; does all need to be in conduit?
1
Can I splice UF-B and NM-B in a junction box?