How can I wrap a downspout around a corner into a rain barrel?

I am looking to get a new patio put in my back yard, and my local township laws require use of rain barrels if you have over a certain amount of impervious surfaces on your property.

I have this current setup, with a plastic flexible spout piece that sits on top of the barrel. This works pretty well until heavy rain storms, where the water coming down the spout is just too much for the flexible piece to handle. Eventually, the weight of the water bends the flexible piece to the point where it falls off the aluminum piece, letting all the water fall straight to the ground. 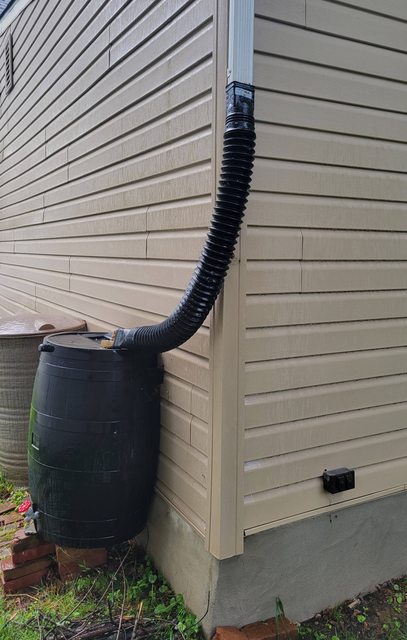 Looking around, there doesn't seem to be any kind of aluminum downspout pieces that "bend" around a corner, most pieces all seem to be straight in some fashion. Moving the rain barrels is difficult because the land isn't quite level on the side of the house where the down spout comes down, and the black barrel is shorter than the tan one (hence why its propped up on bricks). It needs to be slightly higher/level with the tan one in order for the connecting overfill tube to properly drain into the tan barrel once the black one is full.

What can I try to get a more permanent solution that won't fall off during heavy rain storms?

Three downspout elbows. One takes the spout out past the edge of the house, the other connects to it to take it around to the barrels, the last drops it into the barrels.

Rectangular downspout elbows come in two forms - you'll need a couple of one type (bends the narrow way) and one of the other (bends the wide way.)

You also need brackets to attach them to the house so that they don't fall apart with water in them.

You can also do it with round smooth pipe elbows, starting from a rectangle to round adapter at the end of the downspout.

Or you could use a bunch of plumbers strap and screws to properly attach the corrugated thing to the house so it would not fall out. But smooth rigid pipe will flow better and clog less.

Try a variation on this? 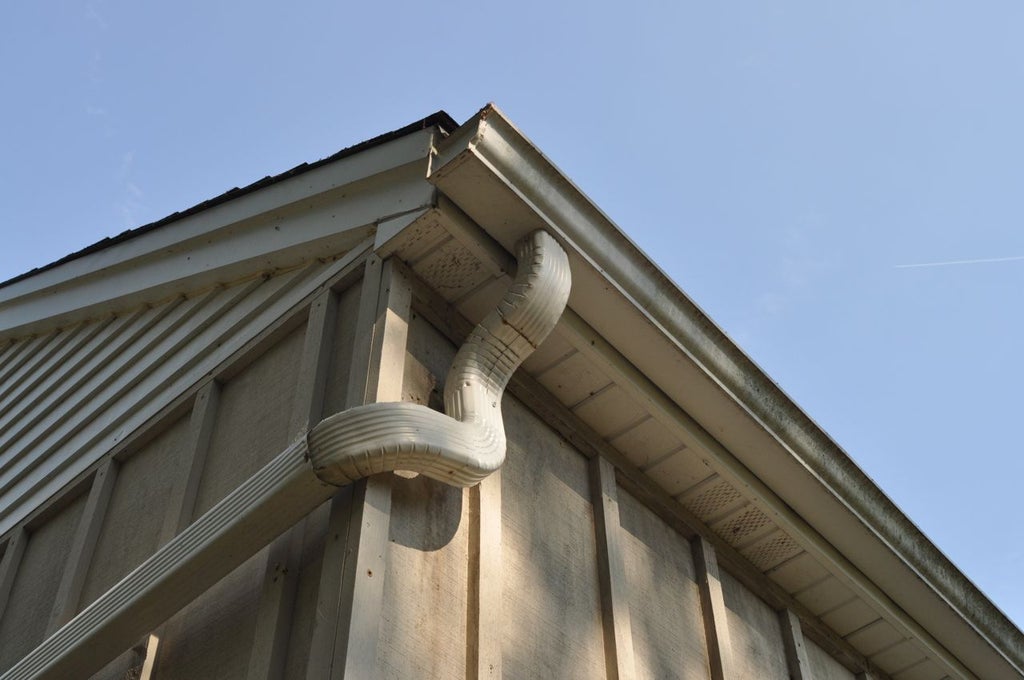 You already have it on bricks. How much more level do you want than bricks? Place the base on the ground and dig out one side until your spirit level shows the base is level. Then put the black barrel directly under the downspout. This appeals to me because of the wonderful cheapness. You have everything you need already.

If you are dead set that the barrel stay put, make a more durable turn. It is the energy of the falling water in the turn that pulls the flexible piece off. I would try this. 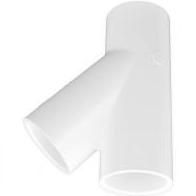 That angled PVC piece costs about $2. The bottom pipe would be capped. Underneath the cap it is supported by a timber in the ground. The angled pipe is connected to another stretch of PVC that terminates on the barrel. Or use the flexible piece. The falling energy of the water is absorbed and supported by the cap and the timber and it rounds the turn with less force. You might be able to use the unneeded flexible piece for the last stretch to the rainbarrel, or use PVC or gutter pipe. 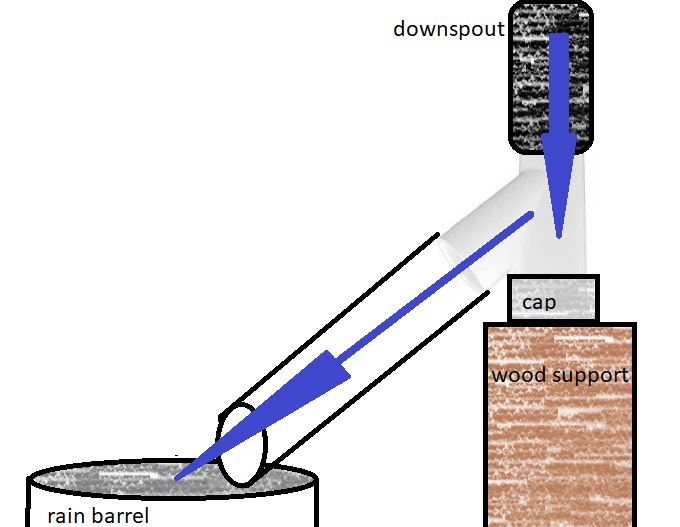 This way, you install them at a correct height... when your barrels are full, the fill tube fills with water, and the rest of the rain goes out the bottom of the downspout.

Forget the little plastic barrels. Get a digger in and sink a concrete cistern in the ground. Sink it deep enough to be frost proof if that is a thing where you are. Install an electric pump and attach it to a tap on the wall. You will never regret this.

I have one of these and it's 5 cubic metres. Some summers I wish I had 10.

As Joshua Dwire mentioned in a comment, most of these flexible gutter lines have one or two spots where you can drive a screw through and anchor them to the metal downspout. That should prevent it from disconnecting.

having seen how much the flexible piece bends when filled with water, I wasn't sure if screws would really fix the problem

These flexible downspouts aren't designed to support weight. You can run them horizontally along the ground, but not in mid-air as shown in your picture. I recommend attaching the flexible downspout as high as possible, so that it can stay more-or-less vertical throughout its entire run. Even the rigid metal downspouts try to avoid horizontal runs as much as possible. If you can move the attachment point twice as high as it is currently, the average slope will be twice as steep and you shouldn't have nearly as much bending.

If the horizontal section is unavoidable, try to place it at the top of the rigid downspout instead of the bottom. The water won't have as much downward kinetic energy just below the gutter and shouldn't stress the flexible pipe as much.

You don't show what your gutter/roof looks like here, but another option is simply to seal off the existing downspout and install a new one above the rain barrel. You'd cut a hole where you want the new downspout to go, install a flange like this one, seal around the edges, and then attach the downspout. There's an existing question that covers sealing off the old opening. This solution is a bit more work, but still DIY-able and should give the best-looking results.

You already have a square to round adaptor - going from the existing downpipe to the corrugated , troublesome one. Surely plastic pipe is available where you are, and it's so much easier to get round corners with round plastic pipe. Swan-necks, 135 and 90 degree bends will get you there, and it can all be bracketed to the wall. Being smooth inside will also solve the flow problem.

Moving the barrel closer to the corner of the house will also help - and use less pipe.

As a temporary, and perhaps permanent measure, you can use pipe straps (metal, plastic, nylon) screwed to the wall to support your existing corrugated plastic pipe in a couple of places. Even if you go with the excellent "AB" answer you should still support the pipe so why not start with just supporting what you have, if in fact the only problem you are trying to solve is that it lacks support? You should also screw that firmly to the downspout with three screws.

Or if you really want to overengineer it: 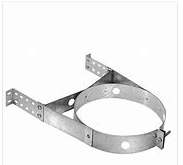 Not the answer you're looking for? Browse other questions tagged gutters downspout or ask your own question.

7
How can I close and seal an abandoned downspout opening?

7
Should I replace fallen gutters?
4
How much drainage pipe should I bury for a new downspout?
2
How can I brace a freestanding downspout?
7
How can I close and seal an abandoned downspout opening?
1
Can I cap off this gutter downspout?
0
How can raise a downspout drain from ground level (Picture)
1
Downspout Clogged
0
How far should I insert downspout into sewer connection pipe?
1
How should I fix my downspout?
1
How can I stop water running inwards under gutters?