I have a 100-Amp 240-Volt Outdoor Non-Fused Transfer Switch and would like to wire it to the main panel outside. My main panel has 3 breakers (Oven [25 Amp], A/C [50 Amp], & House [100 Amp]) my desire is to tie the Transfer Switch into the service entrance wires that run from the main panel to the sub panel in the garage. (Diagram Below) I already own the hardware so I want to utilize what I have if I can, but don't want to look like a complete idiot when I get someone out there and they go "you can't do that!"

(Note: I plan to hire an electrician to actually wire this up)

I guess my questions are: 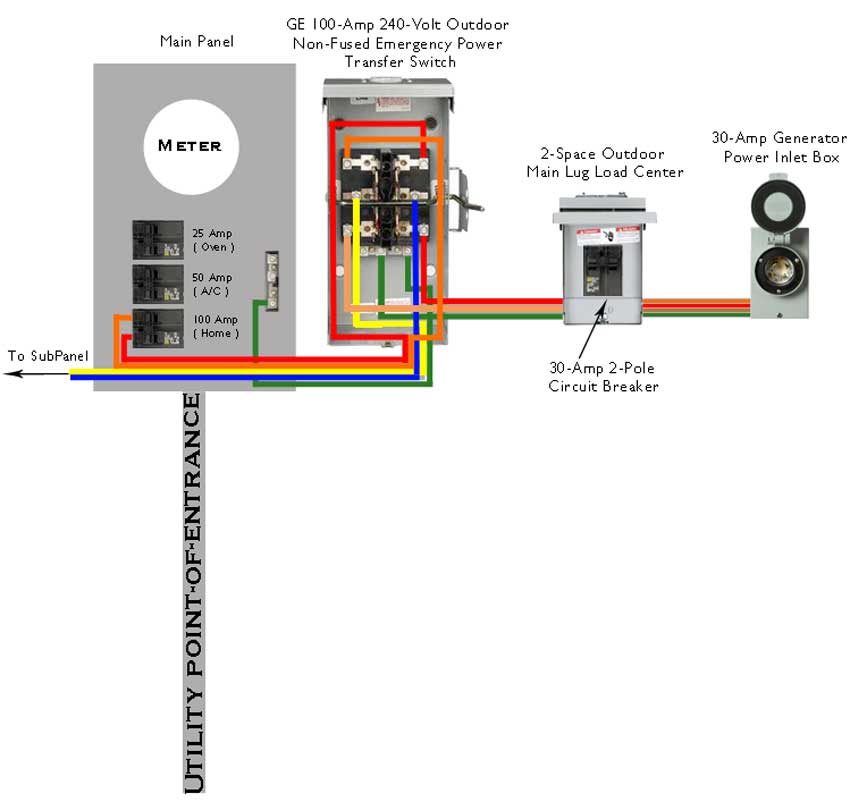 Your primary problem is that since the transfer switch you're proposing has a solid neutral (i.e. it only switches the two hot legs), and your generator has a bonded neutral (neutral connected to the grounded generator frame), something has to give in order to avoid a case of Two Bonds Bickering at your house whenever you plug the generator in. Such catfights are to be avoided as they result in wayward neutral current going down equipment grounding paths, making exposed metalwork "live" in the process.

The simplest way to do this would be to use a Reliance Controls XRK1003DR instead of your existing transfer switch; this is about twice the price of the GE TC10323R, but lets you consolidate by getting rid of the "spa panel" box outright, as well as moving the inlet into the transfer panel with a Reliance PK30 kit. It also supplies some extra breaker spaces, just in case you're running short on room in your existing panel. You could also keep your transfer switch and modify the genset to break its neutral/ground bond, but that'd require a generator technician since there are no instructions in the manual for that, and also makes the generator unusable for portable power unless the bond is reconnected.

The only problem will be the grounding on the generator I can not make out how many conductors you will need both a ground and a neutral and the connection in your gen set may require the bond between the 2 to be removed to prevent a parallel path.

Not the answer you're looking for? Browse other questions tagged electrical wiring outdoor generator transfer-switch or ask your own question.