I have a cedar pergola that a contractor built for me 10 years ago. Recently I found carpenter ant damage to the posts, and previously posed the question here as to whether the posts were still structurally sound, and the answer was no. 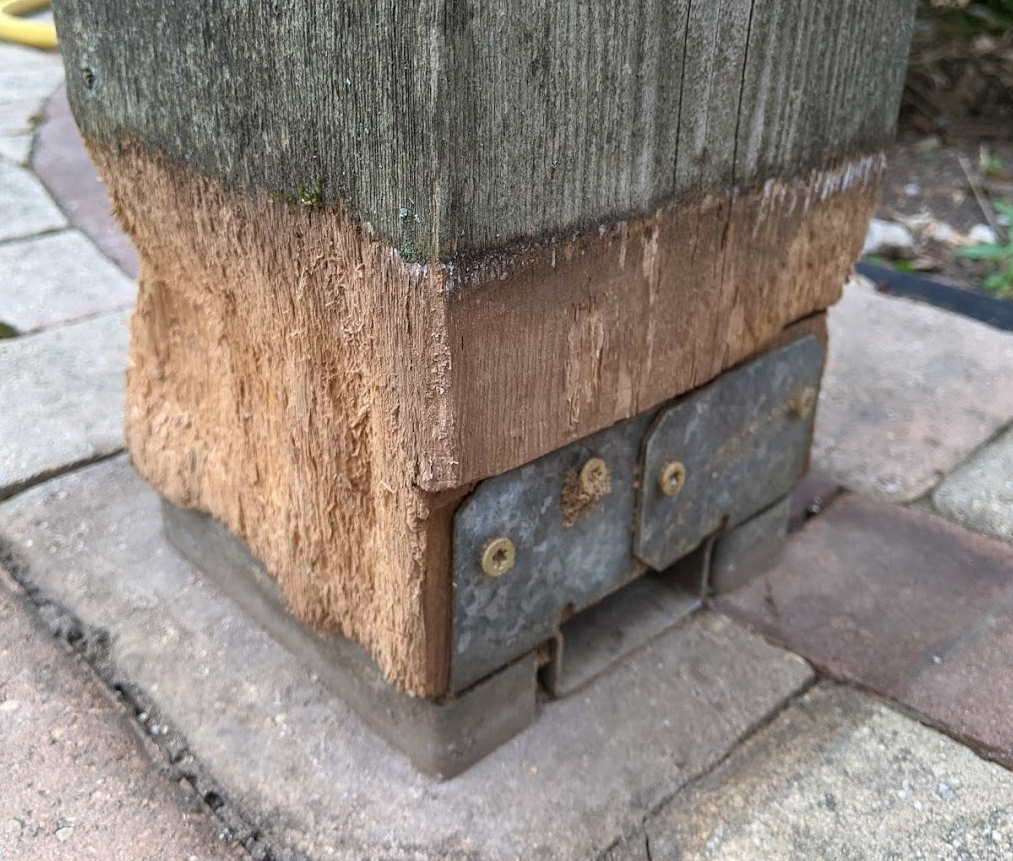 My plan is to try to salvage the pergola by cutting off the damaged wood from the base of the posts. The lowest point of the pergola (the joists) is 90", and the worst of the posts has about 5 1/2" of damage, so I think the pergola would still be at an acceptable height.

The damage was caused by decorative cedar base enclosures. These held moisture, attracted carpenter ants and then hid the ongoing damage until it was too late. 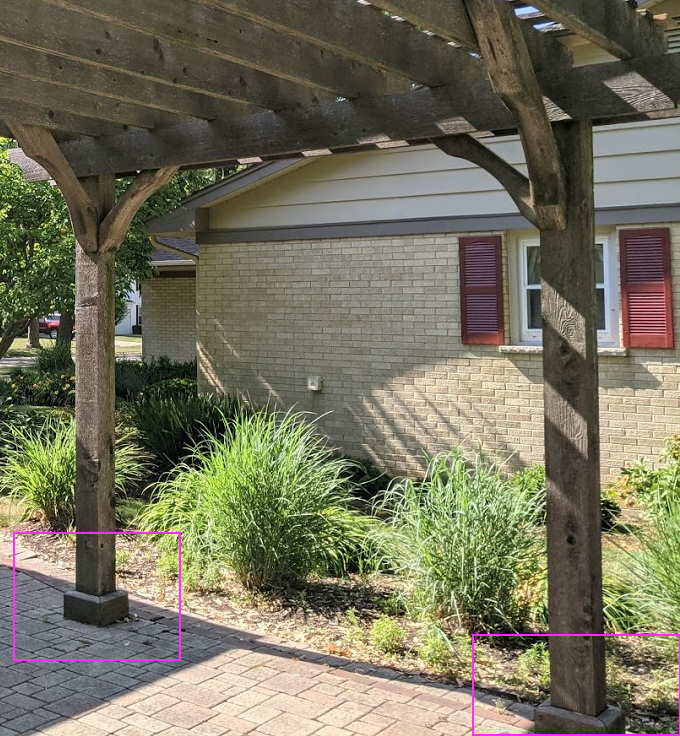 So, I am not inclined to restore these and invite the issue all over again. The existing galvanized post bases are Simpson Strong Tie ABA66Z with a 1" standoff. It seems to me that this was the wrong choice for the job, because they are not meant to be visible in this application and therefore required the problematic cedar base enclosures.

I am thinking that it would be a good idea to replace these post bases with Simpson Strong Tie APB66R Outdoor Accents post bases, again with a 1" standoff. These are designed to be visible and will allow air to get to the cedar to let it dry out after a rain. 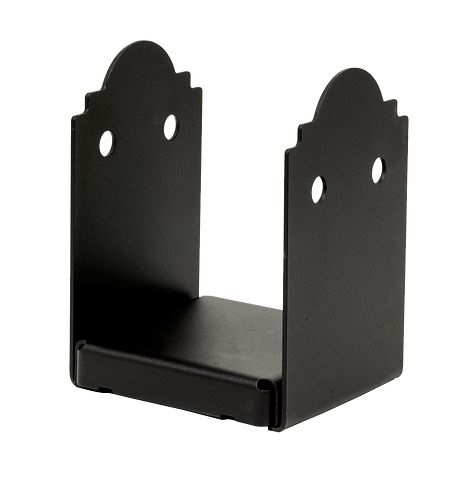 I took a look under the existing post bases to verify that the concrete piers had anchor bolds with nuts that could be removed. There were indeed nuts, but the problem is that they look to be a bit higher than the post base's standoff. This isn't a problem with the existing post bases, which have a standoff that is open and allows the anchor bolts to protroud into the wooden post a little. 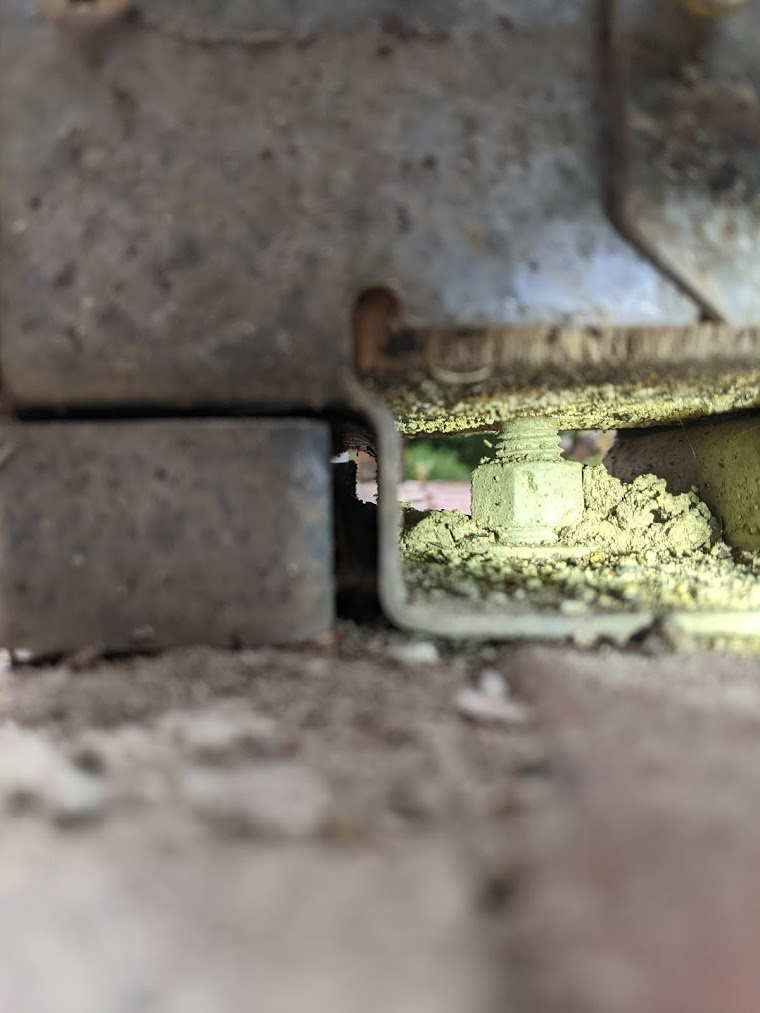 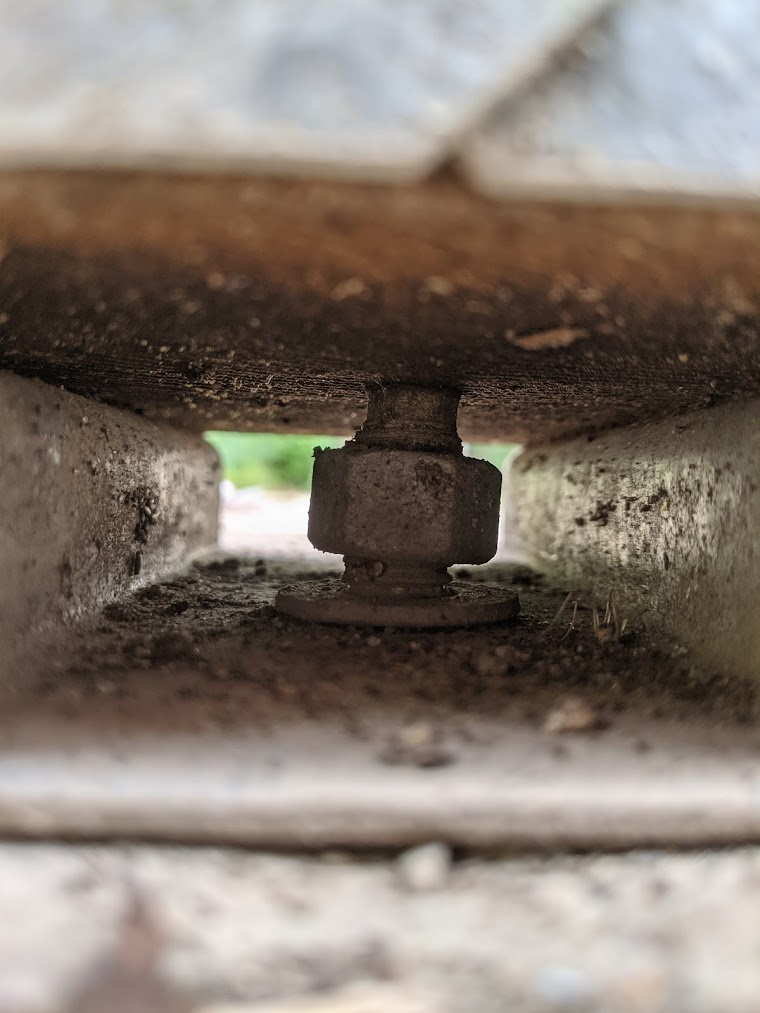 However, the new post bases that I propose to use have a solid standoff, which will not work with my too-high anchor bolts. 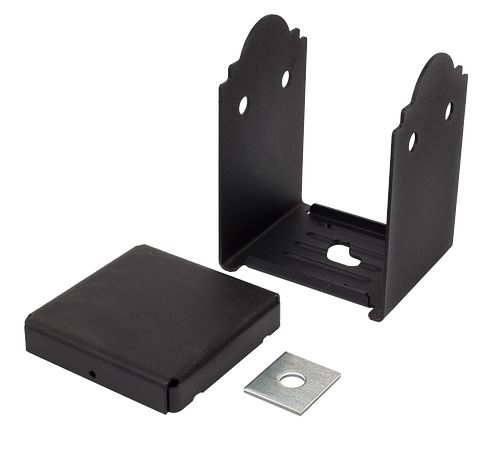 So now we finally get to the question, which is, what is the best workaround for this, a) saw off the excessive part of the anchor bolts (which might not even need to get to the threads) or b) drill a hole in the new post base's standoff plate, to allow the anchor bolt to go through and into the wood a little, as it currently does?

Or, are both of these bad ideas, and is there a better solution? Maybe there is a different approach to a decorative base enclosure that would not trap moisture, such that I could keep the existing post bases.

The square washer in the final picture looks to be relatively thick. You might need all the thread those bolts have to offer in order to get a nut fully installed on top of that square washer, so I would avoid cutting off any of the threaded portion at least. I'd drill a hole in the standoff plate.

I found an alternate post base that has a hole in the standoff and will allow the anchor bolts to extend into the wooden post as needed: OZCO 6″x6″ Post Base OWT-Lite – LS.

1
How wide does a 6x6 concrete post footing need to be using an elevated post base anchor?
3
How should I repair rotten load-bearing porch posts?
1
Carport post base connector - screws or bolts?
0
Angled Post Connector
3
Is it normal for a freestanding pergola to wobble a little bit?
2
How can I reduce flex/sway in my pergola?
1
Need help evaluating damage to pergola post
0
Adding a pergola to existing deck, post anchors?
0
Size of lag bolts for pergola and advice on joining beams to posts