I have an internal, decorated plasterboard wall (aka drywall outside UK) with poor studding: 120cm from its left end, there is a 22mm wide (i.e., as measured horizontally parallel to the wall) stud, then a 38mm stud (the two studs are spaced 60cm), then, after further 78cm, the jack stud of the door. I couldn't find other studs. I need to hang a ~2500 BTUs radiator (I have gas central heating), and I'd prefer to avoid both hanging on plasterboard and adding battens/noggins to fix the brackets.

So I thought to fit a vertical radiator (total width 27cm, empty weight between 10 and 20 kg) by fixing all the four brackets to the 38mm stud via steel plates/flat brackets similar to this one: 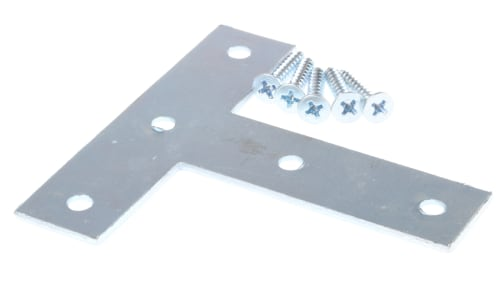 More precisely, my idea is to fix to the 38mm stud the steel tee plate using its central holes, and then fix the two rad brackets one using the left holes on the tee, and the other using the right ones, symmetrically. Possibly, vertically aligning more than one tee on that same stud, and thereby avoiding anchoring directly on plasterboard.

Would that work and be doable? Any suggestion welcome.

I don't really know how metal is gauged in the metric world*. I'd guess 3mm or better, but you'll have to give it a twist and see what you think. If you can bend it by hand it's probably too light. I might even go heavier (or maybe to aluminum) and tap it for machine screws on the wings.

* Despite some statements on this network many U.S. citizens know metric quite well, and we wish we were fully metric. Actually, we are, officially. Sort of.

Not the answer you're looking for? Browse other questions tagged drywall central-heating radiator drywall-anchor brackets or ask your own question.

2
Why can't I bleed my radiator?
1
What is correct way for radiator plumbing/connection in multi-story flat
2
Why would a newly installed radiator only heat when on constant bleed?
2
Why is one radiator TRV in the house missing the control?
0
Radiator behind sofa - Box Design
1
Best way to temporarily relocate a radiator?