I read an opinion somewhere that almost all mobile air-conditioning systems are "working against themselves". An A/C whose motor and compressor is inside the house as opposed to being mounted on the outer wall is inherently "flawed". I am talking about an A/C with a single outgoing exhaust hose: 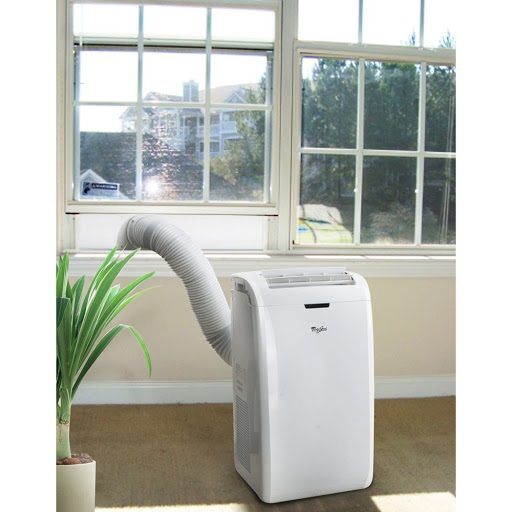 I remember the argument only vaguely, but there are three main points:

As has already been mentioned, “dual hose” “portable” AC units do exist. So, we need to consider two separate questions: are single-hose ACs bad, and are portable ACs bad?

For instance, the first point seems to be equally true for any A/C unit, even the ones that have an outdoor unit. The air has to come from somewhere, right?

Yes, but a conventional household window or "split" air conditioner has two independent air flow paths. Air is taken from inside, passed over the evaporator coil, and sent back into the room, colder and dryer. Separately, air is taken from outside, passed over the condenser coil, and sent back outside, warmer. (Or, exactly the same but warm inside and cold outside, for a reversible ("heat pump") system in heating mode.)

A dual-hose portable AC has the same refrigeration apparatus and the same separated air flow paths, but the outside air, inflow and outflow, passes through hoses instead of just grilles on the sides of the unit.

A single-hose portable AC just leaves off the outside air intake hose, so it is taking inside air and blowing it outside carrying heat.

The air that is being sent outside is coming from inside the room. Thus, some conditioned air is being wasted, and replaced with (warmer, wetter) unconditioned air coming in through building leaks and open doors. So, single-hose portable ACs are less efficient. (We can confirm this from the big-picture perspective of thermodynamics, which tells us that any time we take substances of two different temperatures and mix them (here, the cooled air and the leaked-in air), we are discarding the energy that went into creating that temperature difference.)

There's a secondary problem: The negative pressure extends to adjacent rooms (unless you have unusually airtight doors). As a consequence, running a portable AC in one room will tend to make other rooms warmer because they're experiencing the warming effect of pulling in more leaked outside air all over, but not as much the cooling effect of the AC's output (unless you have fans to blow it all around).

Neither of these is a problem in a dual-hose AC — theoretically. (In practice, users have found that some dual-hose units have poor construction such that the "outside air" side of the machine is not very airtight, and thus tends to pull in some inside air.)

Machinery inside the house

There are disadvantages of the portable form factor:

Both of these can be thought of as inefficiencies that are incidental rather than fundamental — if we put in lots more insulation and sealing against noise and heat, then it would be less noisy and more efficient. But then you'd have a much bulkier, more expensive unit.

This section will reiterate what I said above, but in context of your questions.

I read an opinion somewhere that almost all mobile air-conditioning systems are "working against themselves".

True, because almost all mobile air-conditioning systems are single-hose units. (Why? I don't know. Probably because they are cheaper to make and look less bulky, and only recently did (USA) efficiency ratings start requiring accounting for the inefficiency due to the outside air brought in, if I remember correctly.)

An A/C whose motor and compressor is inside the house as opposed to being mounted on the outer wall is inherently "flawed". I am talking about an A/C with a single outgoing exhaust hose

The inherent flaw is in units with a single hose, but it is possible to have the compressor inside the house with a dual-hose system, which is still less efficient but not “flawed”.

This issue is mostly noise, not heat. The compressor can live in the exhaust air-flow path, so it is cooled by ordinary “fan blowing air over the equipment” and does not consume any of the heat-moving capacity of the refrigeration system per se — in this regard, portable ACs are the same as window or split ACs.

I don't care to comment on claims of impossibility, but I haven't heard of this problem being solved in practice.

It's true that portable AC units have some inefficiencies when compared to other styles of units (window, mini-split, conventional). At least in the US, this is apparent when you look at newer testing standards from the Department of Energy, which will sometimes list two BTU ratings on portable units: one for the capacity of the machine, and one that accounts for things like heat loss into the room from the compressor, and negative pressure effects (for single-hose units). On the basis of efficiency only, portable air conditioner units perform worse. However, that's not always the full story.

For example, let's say you have one of the following cases:

In cases like these, a portable air conditioner unit may be your only option, in which case efficiency becomes.less of an issue.

Yes all your points are correct. The cheap portable single-hose AC units are all of that - I own one.

But mine cost about $100, whereas the cheapest installed system is over $2,000 here. For the 5~10 days a year where the air temp is excessive, I can put up with the downsides.

This unit only cools 35 degree C air to perhaps 30 in the room, so actual performance is woeful, as well as loud resonant vibrations solved by a large strategically-placed F clamp.

All three of the points you cite are indeed true.

The only advantage to the mobile type is that it can be used in places where no other type can be installed. If you don't have central air, don't know how to install a split unit, and can't fit a window mount into any of your windows, you may decide that a mobile A/C is better than nothing.

It is just another of life's little imponderable mysteries that there is no such thing as a mobile A/C unit with two hoses, that would draw in outside air to dump the heat into, and not create an under-pressure in the house which sucks in more hot air from outside.

Here is a shorter version of what the issues are regarding a single pipe or vent portable air conditioning unit. Issue 1 is the most important.

It is possible to design a single vent unit to work better by reducing the air flow rate going out the vent pipe, and therefore increase the temperature of the hot side condenser radiator. Increasing the condenser temperature makes the unit less efficient, and it is still sucking in cooled indoor air to blow out the vent, just less.

If you have a single vent unit you can observe the hot air outside coming in to the building by cracking open a window and holding an unfolded napkin or thin tissue paper up to it. The air coming in will blow the paper away. Now turn off the portable unit and try it again.

I wonder if there are any single vent outdoor portable units that would blow cold air in to the window? It would sort of be the same situation in reverse.

Issue 2: Does the heat of the motor and compressor stay inside the house? No, it can be vented out the vent pipe. The indoor air that's sucked in passes by the motor and then it is blown out by the fan through the condenser radiator and out the pipe. The same for the compressor, but it is mostly cooled by the refrigerant and its heat is put in to the condenser radiator.

Is it impossible to engineer the compressor to be quiet enough for a bedroom? It could be done, but it would be too expensive. Scroll compressors are quieter. A compressor can be covered with insulation, and the chassis of the unit can be insulated inside too. This would make it so much bigger and expensive that it wouldn't be worth it.

Points 1 and 3 are legitimate. There are not many advantages to a single vent portable unit compared to a window unit. One advantage is it does circulate air, so bad smells and cigarette smoke will be sucked out the vent pipe. Another is not having to clean out the condenser radiator all the time if you have a cottonwood tree by your window. I know someone who reversed the fan or bought a window unit that way so he could clean the cotton wood seeds off of the condenser without taking it apart.

The first point is not true for a window AC nor a dual pipe portable unit! A window AC unit uses outside air to cool the condenser. There is not supposed to be any air flow between the inside and outside sections of a window AC unit.

21
What's the most common cause of A/C refrigerant lines freezing?
9
How can I further diagnose my central air conditioning compressor fan motor and capacitor?
0
Does a central A/C with copper lines that are too small cause compressor and diaphragm failure?
0
Can AC fan or motor be upgraded?
0
Air conditioning vented indoors?
0
Non-throbbing, silent-compressor window air conditioner?
4
Furnace blower motor runs briefly then turns off
2
AC - frozen tubes, no air flowing when fan on and system off
0
My air conditioner sparks, but only sometimes, even with a new cable