Should I trim a door to fit a 1930s doorframe or reset the frame?

What you're looking here is a 90 year old door frame. A previous owner threw the original door out, encased the old frame in laminated chipboard and put in a sliding door. I've bought a brand new replica 1930s door to put back in. The existing frame is solid, but not square. It's off by at least 15mm on the latch side. The hinge side seems better and at least the top is horizontal.

To be clear: This is not a frame to which jambs will be attached. These are the original jambs to which the original door was hung. (The stops are missing. The latch side is on the left). The new door is not pre-hung, and will be trimmed and attached as per the original. 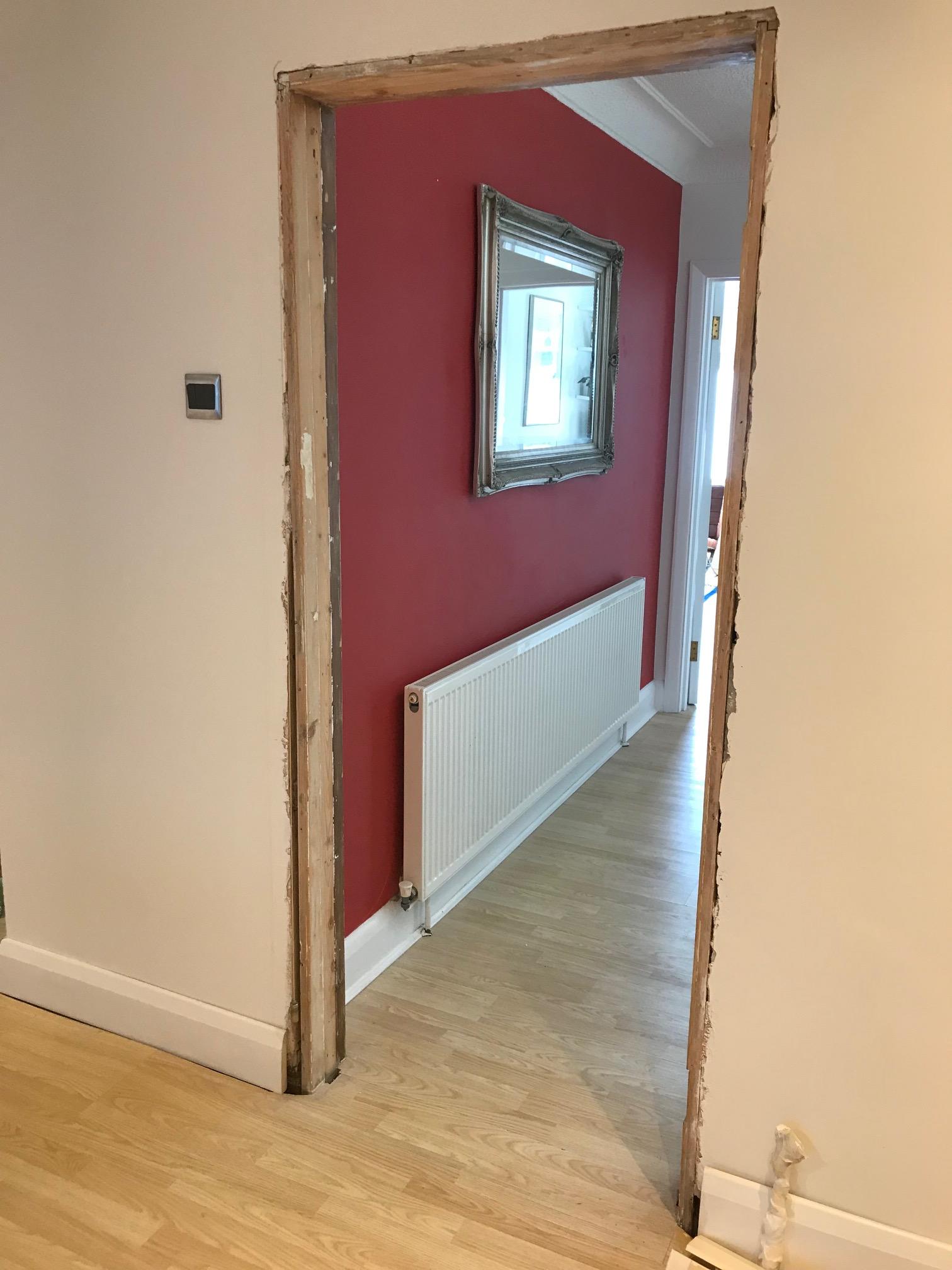 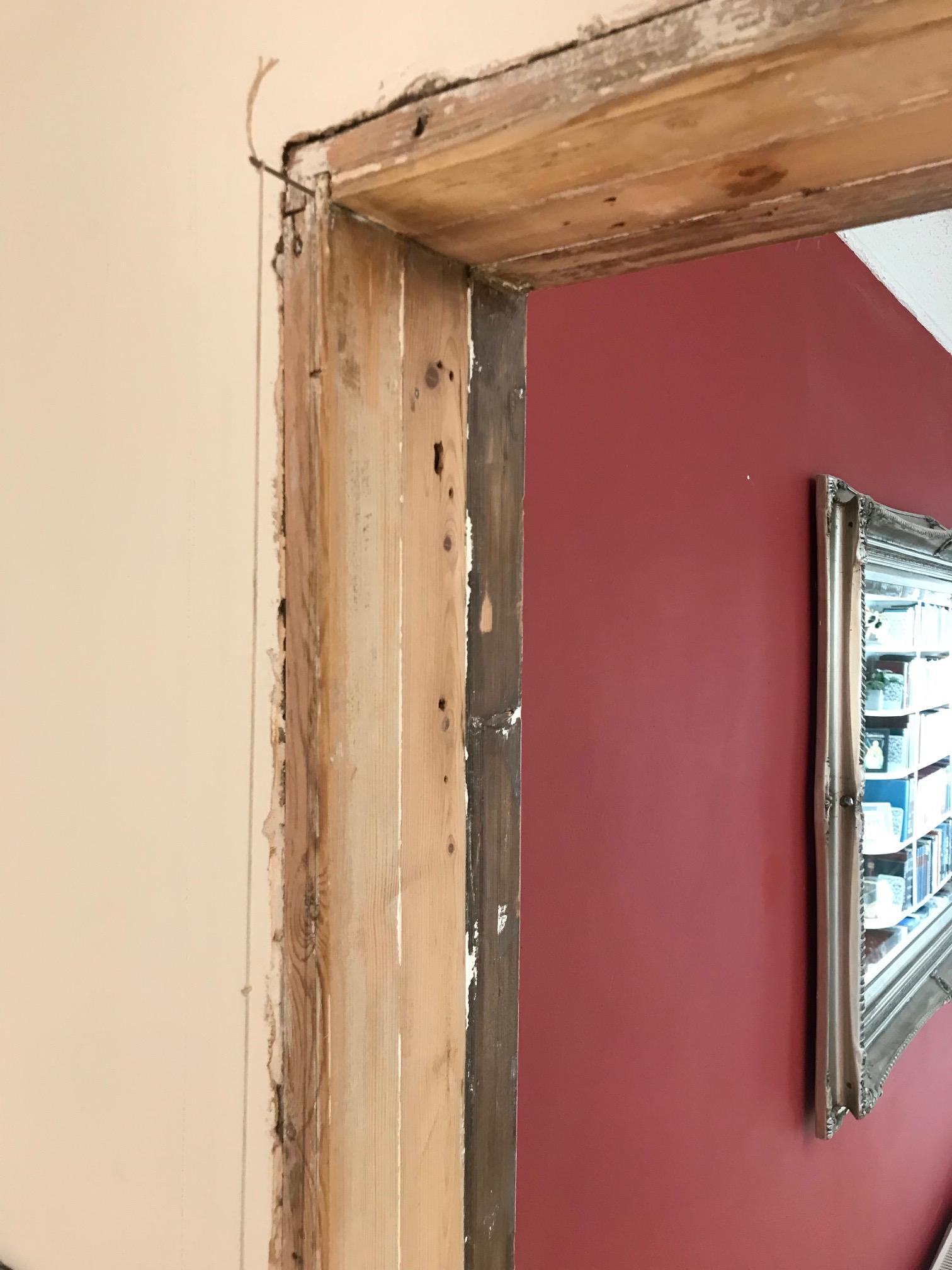 Measurements are not "standard" (~810x2010). My local builder merchants don't stock a replacement lining set with rebates for this size, but more importantly they're not deep enough. The wall is 140mm plus some extra plaster that's jutting out, so ~145mm if the architrave is to be fitted nicely. I assume I'm looking at either a specialist supplier or cutting timber?

I'm unsure if I'm going to attempt the whole job myself, but I've had several carpenters and door fitters take a look and their suggestions and prices vary a lot, leaving me rather confused as to what to do. Possibly I'll remove the frame and hire a professional for the rest.

My question firstly is whether to replace the frame or not? One carpenter said "no". He'll just trim the door at an angle and the architrave will follow the frame. i.e. it won't be straight. Even if you don't notice that, my worry is the vertical panels in the door will make it really obvious that the door is not square.

If the frame is to be replaced, would you buy an off-the-shelf lining set, or cut your own timber? what material would you recommend? It's to be painted white. And how would you fix the frame to the ancient brick wall?

When you say framing, are you actually talking about the door jambs? Because the jambs is what I would square up, not the framing around that. What I definitely would not do is cut the door to fit the crooked opening.

If the 810 measurement is from inside the existing jambs, you might be able to square up a slightly smaller prehung door in the space. Going from roughly a 32" to a 30" door. (sorry I use inches).

Where's the shortest width opening, at the top or the bottom? If at the top, you might be able to pry the bottom of the latch side out from the wall and square it up that way.

Not the answer you're looking for? Browse other questions tagged doors carpentry uk or ask your own question.

4
How do I install a pre-hung door in a rough opening that's too wide?
8
Do I need a wood hardener for worn door hinge screw holes?
5
How can I fit a door in a frame that is too small?
2
How to fix a racked/sagging exterior wood entry door?
0
Uneven/big gap between door and stop trim weatherstip will not seal
1
Front door frame increasingly out of square
3
How to repair a French Door latch that's keeping the door from opening
2
Badly chewed exterior door frame
0
How to reduce the size of a door opening to fit smaller door?