I have two Mansfield toilets in our house, both of which use the #40 flush lever. Over the 12 years that I've lived in this house, I'd estimate I've had to replace each one at least four times -- it seems like every 18 months or so one of them breaks. The break point is always the same: just below where the plastic arm meets the locknut (marked with a red arrow in the image below). 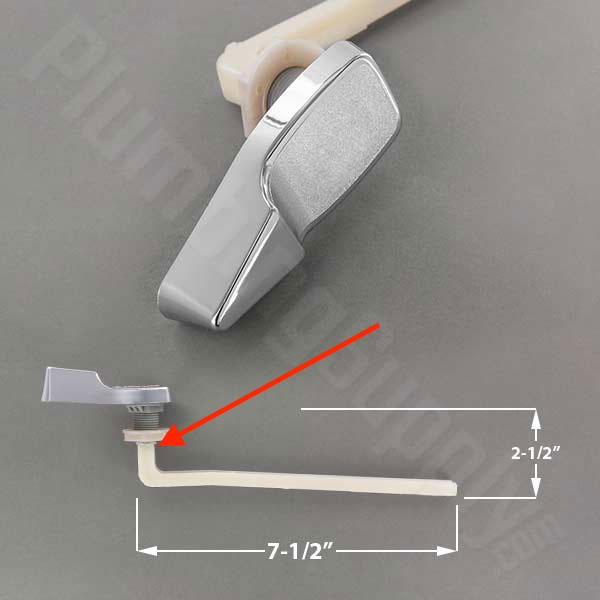 Today it happened again, so I am going to have to buy yet another one of these cheap plastic things.

Edited to add: Several people have asked whether the flush lever, before breaking, seemed to require an unusually large amount of force, as this might indicate that the flush valve seal needs replacing, and would lead to us placing too much force on the lever. The answer is No. We have not noticed any stickiness or resistance when using the levers. Each time the lever broke, the pattern was the same: it was turning very easily and working just fine, and then suddenly it was broken. Sorry if that ruins the most likely theory.

I've replaced the same part several times. Is it "normal": yes in a world where cheap manufacturing results in increased profits, not consequences.

You could try buying a new one, drill an oversize hole through the body of the plastic, inject epoxy into the hole, then insert a metal rod.

Note the metal ones rust and get grungy, they are available. Ensure you're getting genuine parts, before blaming the company, perhaps you're dealing with big box store knockoffs.

2a: you could try (without much expectation of success, but you don't know if you don't try) contacting the manufacturer about the recurring problem at exactly the same point.

ANS: No, I have several toilets in my house for over 30 years, and none of the levers have ever broken.

ANS: See my reasons below.

ANS: I have never seen an all metal one.

This would be opinion of why the lever is breaking so often:

The end of the lever where the chain is attached should be horizonal or slightly down from the horizonal position. If the lever is tilted up, there will not be enough space for the lever to move up and pull the chain. Pressing the lever against the top will create stress at the point where you are experiencing breakage.

The chain length should be adjusted where there is only a slight slack in the chain when connected to the flapper and lever. Pressing the lever handle should immediately start the process of the flapper breaking the seal and opening the flapper.

If too much slack in the chain, this will also require you to press hard on the handle (and against the top cover) for the flapper to open.

When the lever and chain is properly adjusted, you should be able to open the flapper before the lever touches the tank top

Based on comments on Mansfield toilet not having the flapper. My answer on how to properly flush is still valid. You do not need to press hard for a long duration to activate the flushing. Just a light press on the handle will suffice. Pressing hard is putting stress at the elbow.

I have seen all metal version of similar/compatible ones. But I've broken those too!

I have found that in the times mine has broken that it was often that the flush valve was old, covered in rust/minerals, and sticking. Replacing the flush valve with a newer one which required much less force to flush not only prevented the lever from breaking, but made it easier to flush.

BradBrad
10111 bronze badge
New contributor
Brad is a new contributor to this site. Take care in asking for clarification, commenting, and answering. Check out our Code of Conduct.
1
Add a comment  |
0

Reinforce it with a bit of epoxy.

Before you install it, add some epoxy all around the point where it typically breaks. Basically surround it with a pyramid shape. Scratch the parts, especially the "disk" beforehand to ensure a good grip.

That'll act as a poor man's "stress relief" and spread the torque over a larger area.

It's not a perfect solution and may not work, but in the comments you're asking for specific suggestions, and this is actionable.

8
Why is there an extra plastic container in my toilet tank?
0
Why is my toilet not flushing completely?
3
What tools will help me remove an object from a toilet's siphon jet?
0
Skinny pipe entering toilet siphon flush
1
Toilet does not flush, pressure is non-existant, it worked when first installed, what's up?
1
How to connect toilet flush valve chain with provided v-shaped connector