All wires hot in 3-wire cable to 3-way switches?

Need help identifying wires and solving a mystery of everything being hot. Ultimate goal is to install a zwave switch on this circuit, requiring me to identify hot, load, traveler, and neutral.

I just moved into a new house and noticed several electrical gremlins that I've been picking away at. Most were simple like three-way switch common/traveler swaps. However, there is a three way in the basement that has me scratching my head.

I know of two switches that control our basement overhead lights. In both boxes, 3-wire goes to the switch with common and two travelers. Both boxes are 2-gang switches. In both boxes, all three wires in one of the 3-wire romex cables coming into the box are hot.

This one needed a diagram, see below. On the box at the base of the stairs, there are three 2-wire entries, two of which go to a black/hot pigtail and white/neutral pigtail. There is a 3-wire romex for the overhead lights, where the red wire is hot, a white wire is hot, and a black wire with white paint is hot, although it goes to a hot pigtail. Another black/white-paint wire from a separate romex was originally wired to the common screw of the original three way I removed because the switch had cracked. There are also two 2-wires o' mystery that are just connected to the hot pigtail (black) and neutral pigtail (white) and sit in the back of the box, silently taunting me. This box is shared by a functional three-way zwave switch to the stairs light.

On the box by the exterior door, the red wire, black with white paint, and white are all hot. That box is shared with a simple on/off light on a separate circuit and no wires are shared.

A couple of questions: 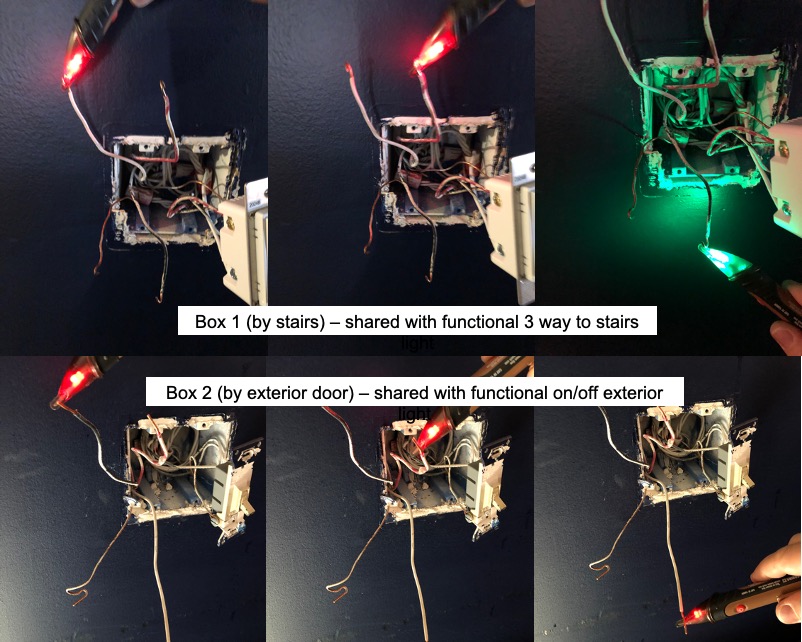 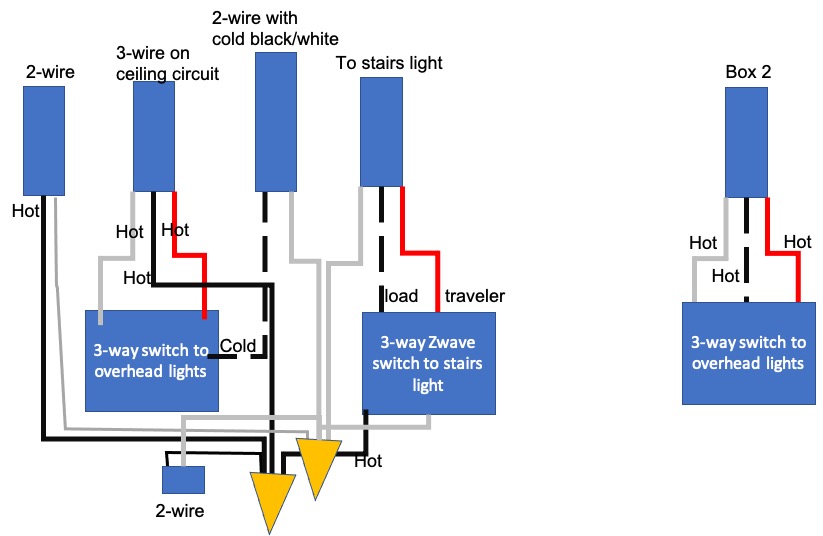 edit: thanks for the tips! I was planning on using the GE/Jasco Zwave switch in box 1 and the GE/Jasco add-on switch (with only traveler and neutral terminals in box 2. For now I replaced them with "dumb" switches using the original wiring, just not the cheap cracked plastic ones that were on there before. I have a multimeter, I just haven't pulled it out among the other unpacking yet- will definitely give it a shot.

If going to a smart switch, Would box 2 then need to use solution #2 from this link? Basically capping off the black on both ends of the traveling /3 wire and using the white through it as neutral. These smart switches don't require full voltage at the add-on site (in this case, box 2) as the single traveler is used to pass digital signals to the main switch.

What you're seeing is a traveler spur

Oftentimes, when power is available at a switch box and a 3-way switching arrangment is desired at that location, the cable bringing switched-hot to the light also terminates at the switch box where power enters. This creates what I call a "traveler spur", not to be confused with a switch loop where power is brought to the light's junction box first, then down to the switch.

As a result, the cold black in the black/white cable is the "load" (switched-hot) wire, the junction of black wires in the first switch box is your "line" (always-hot), the junction of white wires in the first switch box is your neutral, and the red and white wires in the cable between the two switch boxes are the travelers. With your switch, you'll need to repurpose that white wire in the inter-switch-box cable as a neutral to the remote, and then use the red wire as your traveler connection between the boxes, capping off the black wire at the far end.

OK, so this is how 3-way switches work.

There are TWO travelers not one. Neutral does not go to any 3-way switch. All the wires on each switch are "hot" at one time or another.

This is darned inconvenient for trying to install a smart switch, but people who installed 3-ways in the 1970s were trying to get them to work, not to get them "smart switch ready" for your sake.

Also, keep in mind this is one of at least 5 possible 3-way layouts.

0
All the wires are hot in a 3-way switch

1
Wiring the Auxiliary switch on a 3-way switch
1
How do I convert from 3-way switches to dimmers?
3
Three-way switches to control top outlet of multiple receptacles
0
Are ungrounded three-way switches dangerous?
0
Light Switch two hot wires (one from wire another one from anothr switch)
2
wiring - is this feeding other circuits or all switches?
1
Simple switch wiring
2
Replacing outlet; found one white wire hot. How to connect?
4
How do 5 light switches in 2 boxes with all black wires work?
0
how to wire two switches in one box with three wires , two of the go to different lights, which one is hot