Can I mount a TV stand on drywall on only one stud?

I have a TV stand pretty similar to this one 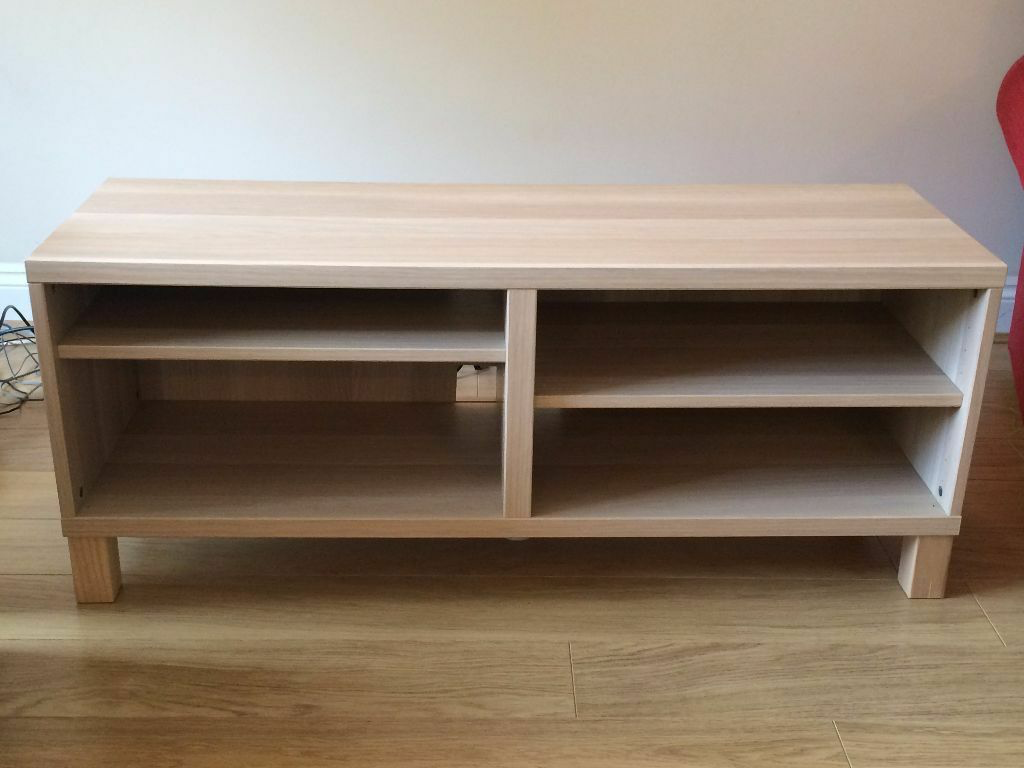 The problem is, since the three mounting points of the TV stand have fixed distances from each other, I can only screw the middle one to the stud. The two side ones will have to be screwed to the drywall. Would this be enough to support the combined weight of the TV stand, the TV, and other things I might put in the stand, say, 80 lbs? Note that I'm not going to move the TV stand once mounted since it's obviously not a swivel TV mount.

Edit: thank you everyone for the great suggestions. I decided to go for a TV wall mount instead, as properly mounting the TV stand likely will be more expensive and less secure.

Mount a piece of plywood on the wall, screwed into 2 studs. Mount stand to plywood. Done.

If you paint the plywood to match the wall (doesn't need to be perfect) it will blend into the background.

However, this is all assuming the stand is truly designed to be wall-mounted. The pictured stand looks like it would be rather strange high up on a wall. Double-check the instructions to make sure the "mounting points" are actually for mounting the stand up on a wall, as opposed to simply securing it against tipover. For securing against tipover, 1 screw in a stud or 2 decent hollow mounts (e.g., toggle bolts) is sufficient. Tipover is a real hazard with taller furniture (e.g., tall bookshelves anywhere, medium-height furniture in a child's bedroom), and what appear to be "wall mounting holes" may not be what you think.

I am going to guess that cabinet is 60" wide. Assuming your studs are 16" oc then you should have 3 studs in the wall behind the tv stand. Forget the pre-drilled holes your tv stand gave you. I'll assume the top is flush to the back of the cabinet.

First I'd put a ledger - a 2x4 - under the full width of the cabinet at the bottom to position the cabinet above the floor. I'd screw that ledger into the 3 studs (2 screws per stud).

Next I'd remove the shelves, put a 2x4 under the top of the cabinet, inside the cabinet. Screw the 2x4 through the back into the 3 studs.

You can then either screw through the bottom shelf into the ledger or get metal angles and screw those into both the shelf and the ledger. The top shelf is probably going to require metal angles typically sold as anti tip hardware.

Each screw is going to give you more than 50lbs of pull out but if someone sits on the front edge of that cabinet they have a fair amount of leverage against the pullout. I wouldn't advise standing on it.

that stand does not look like it was designed for wall mounting. I think the mounting points the back are only to prevent it from tipping over.

I would NOT try to mount the cabinet on the wall. Get a wall mount for your TV. Follow the instructions for installing the wall mount. Done and done.

You can buy a TV bracket suitable to mount a small TV on a single stud, for $20.

The only objective you've stated is to save that money. If you want to do a botch job there's nothing really wrong with hanging a TV from a hook. That's a lot safer than hanging a flimsy chipboard shelving unit on the wall by one screw and putting a TV loosely on top of it!

Some of the other answers here, suggesting that you buttress your wall and furniture with bits of wood ..... will cost more than a TV bracket.

Plant a 2-inch by #10 screw hook into the stud. Get a pair of metric eye hooks for the TV. Not screw hooks, but hooks with metric bolts of the right size for your TV's VESA mount. These hooks will come with nuts that you can use to lock the bolts against the TV. 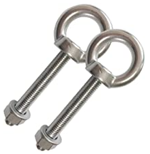 Then use picture wire to hang it up.

It's not terribly safe or attractive but it's WAY safer and more attractive than Plan A, and it will cost about $2.

If you don't even want to spend $2, go get some concrete blocks from a rubble pile somewhere and place the existing TV stand on them. 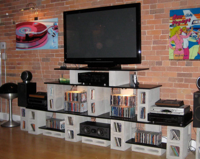 Not the answer you're looking for? Browse other questions tagged drywall mounting studs or ask your own question.

7
How do I mount 20 lb speakers to drywall between studs?
6
How do I mount TV through 3 layers of drywall and into studs?
10
Can I hang a TV with one stud and drywall anchors?
3
Mounting Full Motion Mount on a Single Stud
2
Mount a fully articulated tv mount with only one stud
2
Articulated arm wall-mount (13lb. LCD monitor), 25 gauge metal stud, 3/4" drywall
0
Mounting TV on Thick Drywall + 1" Stud + Concrete blocks
5
Mounting TV on a weird wall that has some material between the drywall and stud
1
Gap between stand up shower and stud
0
mantel mount with only 2 studs available