How long does it take for ground to become sufficiently compact to bear the weight of an above-ground pool?

The back of my property has a couple of drops down toward the final elevation, sort of a terraced effect. The first of those drops I retained with a timber retaining wall in order to make the backyard area closest to the house a level space. The retaining wall is built using 4x4 uprights set to frost depth (~28") and 2x8 horizontal members attached to the load side of the posts. Excavation was limited to "scraping" the little slope to remove the remains of a flag stone wall from years ago, and to remove a large bush that had grown into the slope. So for most of the length, little soil was removed, save the bush which required a 5' or so round excavation to fully remove. The wall was then built out 2-3' from the previous slope and then back filled to bring everything level with the rest of the yard to the house. This was all completed before the end of September 2020.

My wall is the same as this, only the posts are square: 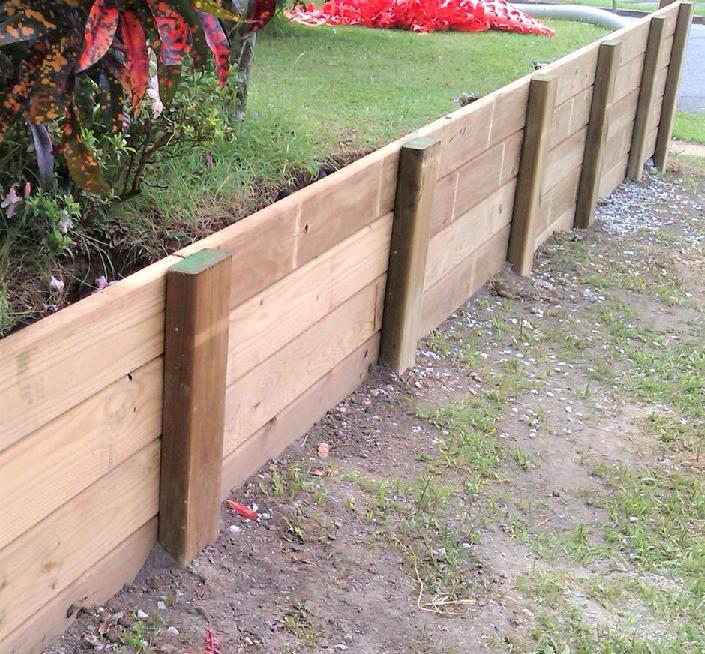 The height of the wall varies along its run, but is never taller than 36". That means there is probably about 3' or so of disturbed (back filled) soil along the wall's length, and an extra 2' or so in a semi-circle where that bush was.

Now for the question. I would like to place an 18' round above-ground pool on the level space. The edge of the pool would come to around 5' of the wall at its closest point, which means it would end up setting on some amount of the disturbed soil, where the wall was back filled in the area of that bush I removed.

So the question is whether or not this disturbed dirt has been settling long enough for me to reasonably expect it to bear the weight of a pool this size. Or at least the part of it that would be sitting there. It's over-wintered, been driven on at least twice by a Bobcat, and seen rain this spring. But beyond that, I have taken no extraordinary measures to compact it further.

What opinions/guesses could I get as to what the load-bearing status of that soil might be at this point?

P.S. The soil here has a lot of clay in it, some sand. Dig deep enough and it's kind of a river wash consistency.

Suppose your 18 foot round pool is 54 inches deep and is filled right to the top with water. How much pressure would that exert on the ground below? Not much, in fact.

If the pool were any closer to the wall then we might start to worry about whether the wall can hold back the added weight of the pool. Given the setback is greater than the wall height that shouldn't be a problem.

The soil surface will settle ever so slightly under the pool but assuming there were no large voids in the backfill (ie no large clumps of clay tossed in a group) it'll be fine.

With the recent backfill and about 4 feet of water depth my concern would be very localized subsidence, ie mini sink holes, that would not be a problem with a solid bottom pool but a vinyl bottom would sink into these, stretch and maybe break.

My suggestion would be to prepare the ground first by removing any sod, renting a vibrating power tamper, going through a couple of cycles of flooding, drying, tamping. This will hopefully cause small cavities to collapse and create a solid base.

Then you can google "prepare ground for above ground pool" and follow generic advice .... ie, levelling and covering with crushed stone.

Another way to solve this would be to cover the ground with something solid. I had a temporary soft-sided pool that I placed on large foam tiles (the kind used in gyms) to avoid this kind of problem. It worked nicely. I don't know if it's recommended for a more permanent installation. I only needed mine to last a few months. Anything that would withstand subsidence of, say, a 2 inch hole. Some people put a concrete base covered with a soft lining for their larger above ground pools.

Not the answer you're looking for? Browse other questions tagged load-bearing pool soil or ask your own question.

3
How can I level concrete pavement for an above-ground pool?
2
How should I level the ground for my above ground pool?
0
Retaining wall back fill/base rock and pool base rock
3
Compacting soil after removing fence posts to install new posts with vibratory ram?
1
Can bushes help keep driveway and patio gravel stable?