Small 1940s colonial with no soffits, no eaves, two gables and needs ventilation

I have a 1940s colonial with no eaves, no soffits, and soffits can't be added. I do have two gable vents (original) and a power fan that was added (but is broken). I have early stage mold. The diagram below shoes the attic space, which is small and insulated to R-49.

How do I solve this? I was on board with edge vents--until it appeared there are no baffles to get soffit to ridge airflow. Now my short list of contractors disagree on what to do: 1. Keep just gables 2.) Keep gables and add a ridge. WHAT DO I DO -- Please help me! 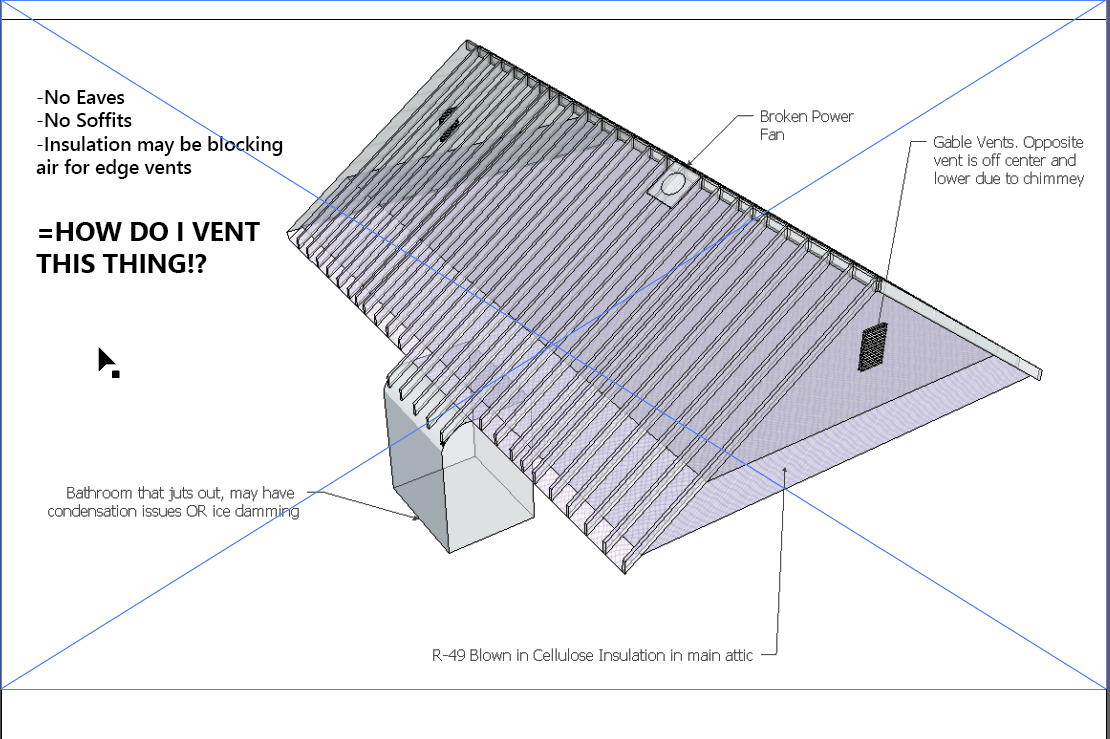 I think the only way you're going to be able to achieve the needed airflow, or air exchange rate, is with a powered solution.

So I would 1) replace the non-working fan and 2) try to get as much vent area as possible along the lower part of the gables.

On replacing the fan, you may be able to do that without removing the flashed in housing that's on the roof. I've done that in the past.

Buy a new roof vent fan, as close to the size of the one that's not working. Remove the motor and fan blade from the new fan's housing, and mount it into the existing housing on the roof. The one I replaced had a 3-point mount that attached to the side of the housing, and the new motor/blade assembly fit right in with a couple of shim washers.

Not the answer you're looking for? Browse other questions tagged ventilation roofing or ask your own question.

1
Adding ventilation and insulation with limited soffits
1
Roof Ventilation and Insulation - Midwest - Gable and Ridge vents only, no soffit vents
2
Air flow and ventilation in an apartment with all windows on one side
4
What's the most effective way to further reduce attic temperatures in hot weather?