Does a kink in a snake ruin it?

I've got a hand operated drain snake which looks similar to this model: 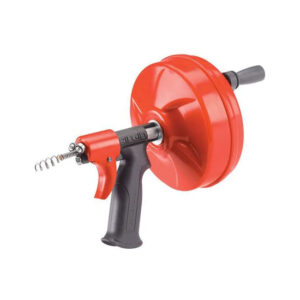 I'm trying to snake out the drain under the kitchen sink, but I have found that when I get to a certain point I'm no longer able to push the snake further into the drain. Normally what I do I allow between a couple and eight or nine inches of slack between the snake and the drain hole in the wall, pull the thumb lock to lock it (it's a bit different than in the picture), then push firmly, turning the wheel as needed when I get resistance from turns. But there are two or three "kinks" in the snake line where the line has been bent, probably from getting twisted up in an earlier usage.

I was able to get past the first kink, which is only about a 45 degree bend in the cable, simply by being persistant - it took about half an hour of pushing my fingers into the drain hole to try to hold the cable down as I pushed forward. But the second kink is closer to 90 degrees, and no matter what I do when I push the cable in, instead of going down, the cable whips around and winds up going up into the vent stack. Turning the handle to rotate the cable just makes it worse.

Is there some trick to dealing with kinks in the snake or is it ruined and I'm just wasting my time trying to use it?

For future reference, I was able to solve the issue of kinks in the snake by taking a pair of needle nosed pliers on either side of the kink and bending it back into place. This isn't perfect - there is still a bit of kink that remains, and it was still a bit time consuming to root through the pipe far enough to clear the obstruction, but it did work.

2
How to install sink drain pipe correctly
1
Tub drains very slow
1
How to remove shower drain piece (grip from inside)?
0
Clearing out blocked weeping tile
0
Why Can't I Drain My Hot Water Tank?
2
How do I fix a sewer snake cable that has kinked inside the spooler cage?
2
Unable to remove push-pull stopper from tub drain
0
Slow draining shower
0
How to screw in tub draine when pipe keeps getting pushed down?