Why do phone and cables companies leave their cables behind, and what to do about it?

Lately while walking the dogs I've noticed a lot of unused cable dangling down from the (quaint) phone poles all around our town. As far as I can tell from both its position on the pole and the appearance of the cable end that it's mostly POTS or coax. In some cases there might be 20-30 yards of the stuff left behind. When I first noticed I thought it was a one-off, but since I've been noticing I've found examples all over town.

The photo below shows the type of wire I mean. This is clearly coax. It's also clearly not carrying a dangerous current, given that it's (coax, and) just lying on the ground about 30 yards from the door to a school.

Is there a reason why utility technicians do this? Can I snip it off / tape it up / dispose of it? 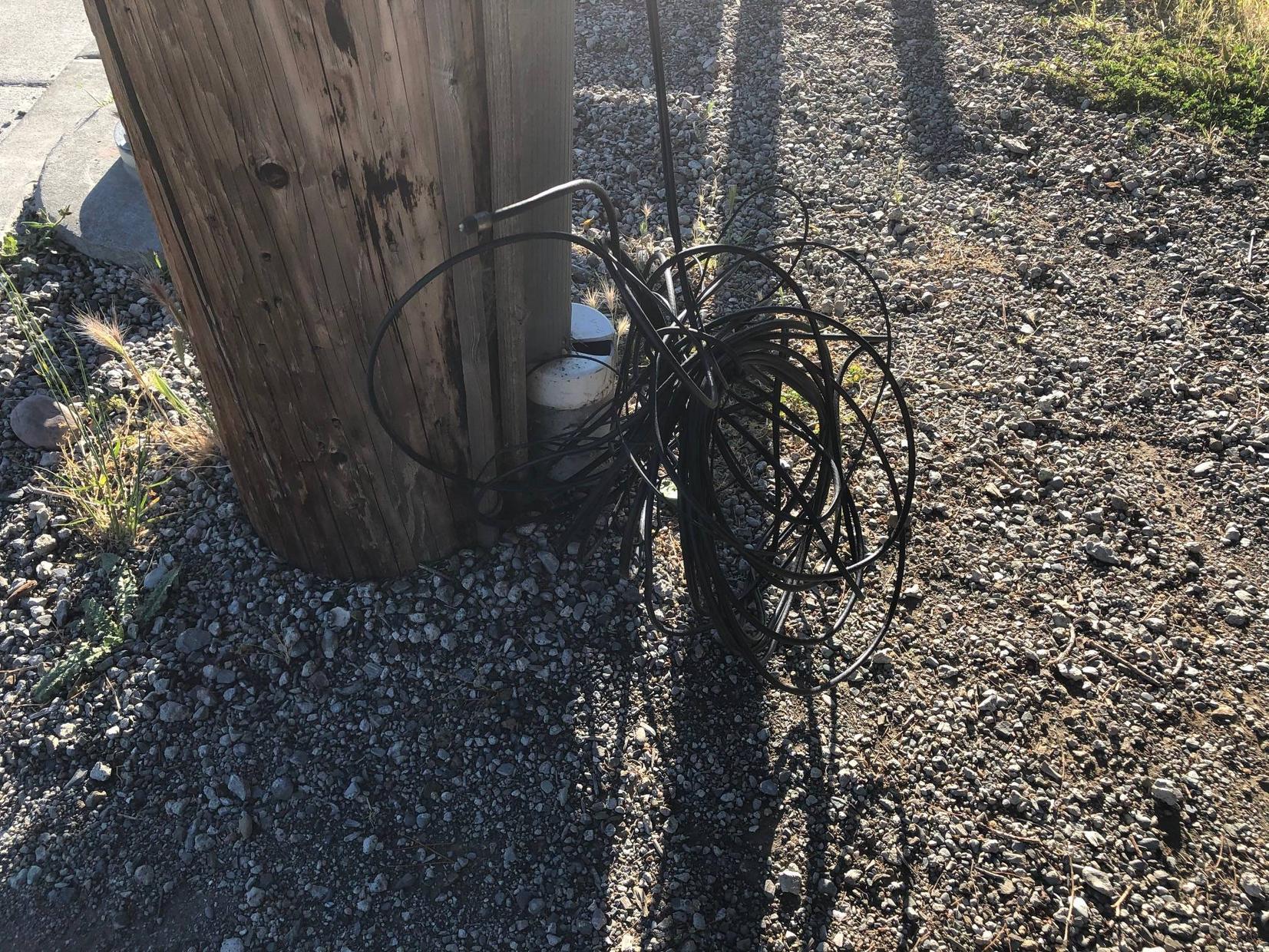 They do it because they can.

It costs money to remove cables. If the municipality doesn't require them to do so, why would they? Most people don't notice or complain, and there's the off chance they'll use it again if the next owner wants service.

I've gone so far as to cut them free of my home, neatly coil the cable, and wire it to the pole on the alley. Eventually they'll be at the pole for some other reason and cut it down. Technically the cable may be their property, but that doesn't mean it has to lay around on (or over) mine.

Now you've changed the question significantly to describe a wire fed from underground. Except you still have a trunk running down the pole, so this is still a wire coming down off a pole.

Again, you do not know what that wire is crossed up with. We see live voltage on CATV jackets all the time, not least due to lost neutrals at the other end of the cable.

As I said in a comment, if it's on your property via an easement, take it up with the company you granted the easement to. If it's not on your property, 8th Commandment. Though, feel free to act politically to get the companies to clean up their property.

Downed wires are downed wires! STAY THE HELL AWAY

You are talking about a wire which comes down from the pole and comes near the ground. That is a "Downed Wire". They are dangerous as all getout, because they can have live voltage on them.

You should not even be close enough to tell if they are cable TV vs phone wire! STAY AWAY - STAY ALIVE.

Even if they were telecomm, you have no idea what they are attached to (or what they got tangled up in) on the other end. Technology changes are obliging phone and cable companies to fit powered equipment on the poletop, and having to take whatever power is available there, be it 240V, 277V or 2400V.

I do work on overhead lines from buckets and towers. The golden rule of not getting dead doing that is that the bucket/tower lives in "poletop world", and that vs ground world is matter vs antimatter. Nothing ever, ever is allowed to drape or be let down from "poletop world" to "ground world".

Call the power company and report a downed line

Pardon the sarcasm, but it illustrates the point: "Before you call us, step really close to the wire and see if it's phone line or coax" said no power company employee, ever. That would be a deranged thing to tell the public, because sooner or later one would turn out to be energized.

The PoCo will come out and deal with it, with extreme prejudice.

If it is indeed a telecomm line, they will remind the telecomm company of the terms and conditions of their lease of space on the pole. And maybe send them a bill for the service call. So, profit center for the PoCo lol.

If I have fiber and switch to cable (or vice versa), the cable company will remove the fiber from my house but they will leave it at the pole because it is the other company's property. Or they may let the other company...

If I move out, the company might disconnect but leave at the pole because of the next tenant or owner wants similar service then they can use the existing cable and save $.

But in any case, as stated by Harper: if the wires are near the ground, don't touch. Call the electric utility (they normally own the pole) and they'll check it out and remove, repair or notify another utility as needed. Even if a cable really is low voltage "nothing", things can get messed up at the top and make it hot. One time I had a low hanging coax situation. Called Pepco and they took care of it even though I knew it was comcast and knew that 99% certain I could have climbed on a ladder and done it myself. The 1% risk is a serious one.

Not the answer you're looking for? Browse other questions tagged wiring telephone phone-wiring or ask your own question.

4
How should I wire this White-Rodgers fan and limit control? What about the thermostat?
2
What is the minimum distance that should be maintained between parallel electric and data cables?
6
What should I do about old cables that have been damaged?
2
When wiring a mains plug, why are the cables squeezed under the screws and not circled around?
5
What should I do about a switch that feels warm and arcs when toggled?
0
Is it ok if I pass through a RJ11 (Phone line) cable outside and leave it while it is raining?
1
3 wire cooktop, 4 wire stove, 4 wire supply - what to do about neutral and ground?