I noticed that the cap was not upright, so I tried to unscrew the cap to reseat it, thinking someone screwed it on incorrectly, and the whole thing very easily came out in my hand.

Looking down the drain I don't see the cross that I think is used to hold on to to unscrew the whole thing (I tried to get the camera's flash to illuminate it). And the removed stopper is missing two of its four supports (yellow arrow in the first image) that attach it to the drain's wall (not sure of the exact original number). I'm thinking it came built-in and it's now broken.

If it is beyond repair, do I get a new stopper similar to that one that was built-in, or will it require removing and replacing the stainless steel drain body?

One of my concerns if related to making a decision: those missing legs, could they puncture the pipe if they're stuck downstream? During installation I saw that it's of the flexible type. If it's a possibility, is that pipe replaceable without removing the tub (the tub was laid on concrete surrounded by bricks).

If it matters the tub is fiber reinforced plastic. And down the drain it's a white-walled PVC pipe, note as mentioned earlier, the crossbar came off with the stopper. 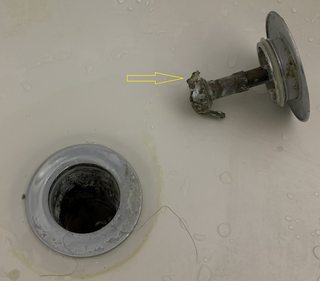 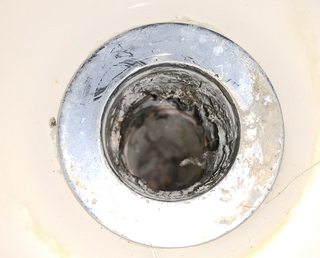 plumbing repair drain bathtub replacement
Share
Improve this question
edited May 20 at 14:08
anon
asked May 19 at 20:32

No, I don't consider that repairable. Enough metal corrosion has occurred that entire assembly is suspect and at risk of failure. The good news is that it's a fairly easy repair if you have access. If you'd like help with that, post some photos.

No, the metal parts won't damage your pipes. They're probably already out at the street.

Not the answer you're looking for? Browse other questions tagged plumbing repair drain bathtub replacement or ask your own question.