I have a small covered patio illuminated by an unattractive wall-mounted CFL fixture. For an improved ambiance, I have hung a string of LED patio lights that are plugged into an exterior outlet.

Below is a photo of the inside of the CFL enclosure for reference. 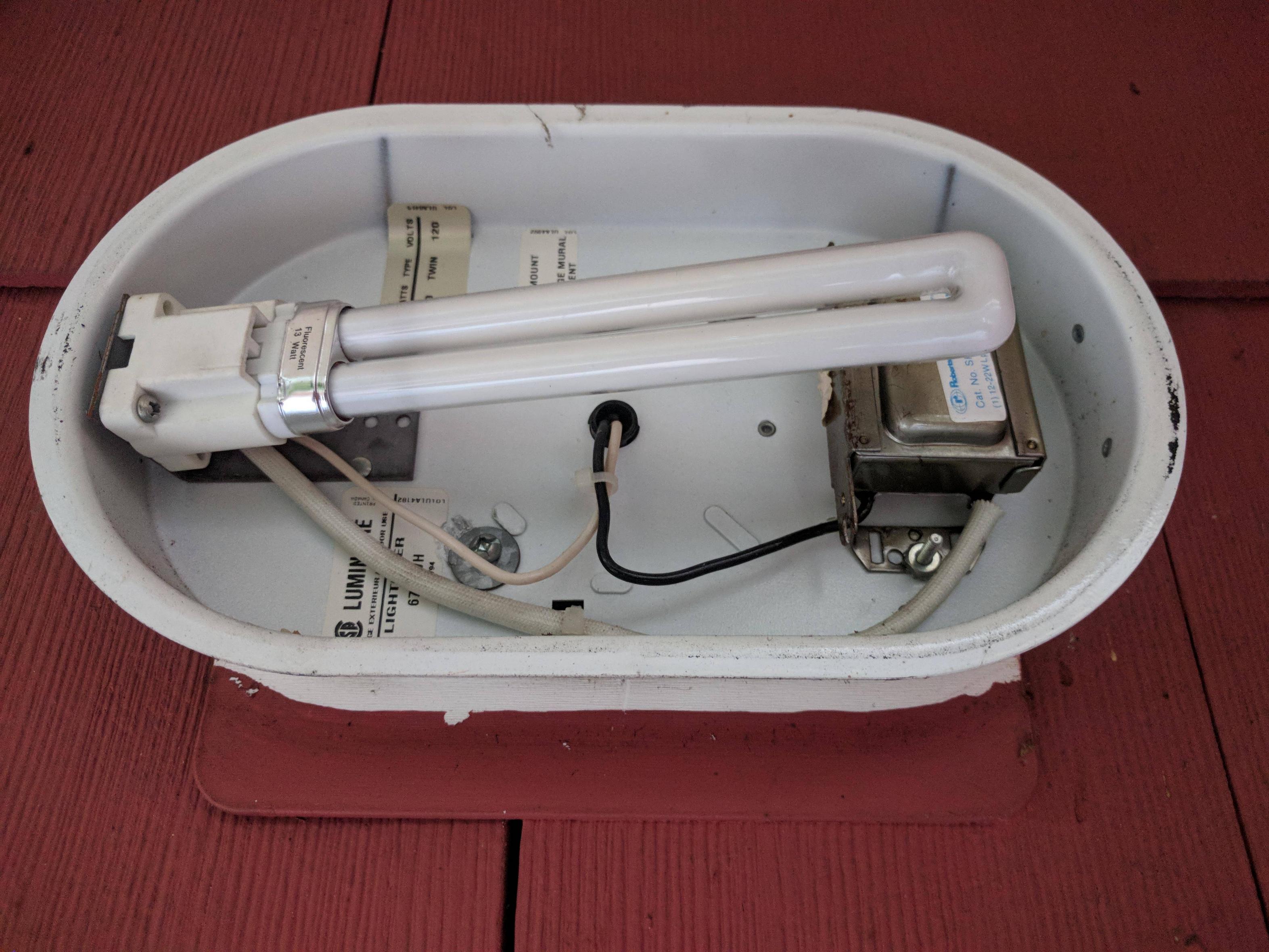 I live in a condo building that has a by-law regarding alterations to the exterior of the building.

Obtain approval before altering a strata lot or common property. Before making an alteration to any of the following: the exterior of a building;

I'm looking into exactly what this means for my purposes, but I suspect a "temporary" solution is preferable to any permanent electrical changes.

How can I safely wire up my LED light string to the existing CFL fixture, such that the light string (rather than the CFL) is controlled by the indoor switch?

Some ideas I've considered, but am not sure how to evaluate:

electrical lighting exterior
Share
Improve this question
asked May 19, 2021 at 4:25

Of course, the "best" thing would be to get approval for a licensed electrician to add a switched outlet outside. Or use a remote-controlled outlet, some even have regular-looking-but-wireless wall switches you can stick next to the light fixture's switch with removable adhesive. Or maybe invest in some alexa/homekit/smarthings junk.

The socket cannot be adapted, the cfl gets high voltage from the transformer. I might consider ripping out the transformer and cfl socket, then putting a normal ceramic bulb socket on the bracket. Many sockets have the black and white wires pre-wired; just match them up with the leads show using wire nuts or wagos. Might need some epoxy or jbweld to attach the socket to the bracket, depending on how it attaches. It doesn't have to be very sturdy, but it needs to be able to take some heat, so no hotglue.

It would then be fully functional with CFL/LED bulbs and nobody would notice or complain. At that point, a simple "socket-to-plug" adapter would give you a plug for a DC adapter for your LED strip. Use an inline GFCI if possible. I don't know how you would hide the wires and keep the wall wart dry, but I think this idea at least solves your wiring issue within the confines of your HOA and pre-sale home inspectors.

I would install a snap in receptacle /panel mount receptacle. This would take a little cutting on the flat side making a hole large enough for the receptacle to snap into then wiring the white to white black to black inside the fixture itself. When I searched for a snap in receptacle I found them for as low as $1.50-$10.00 many to choose from. , I might see if there was a box behind with a ground and bring that into the fixture and ground the green I did see a 2 wire Leviton 1306 if this was polarized it may also work but I prefer 3 prong grounded receptacles.

There used to be an exception for receptacles over 5-1/2 or 6-1/2 feet where GFCI protection was not required and that’s when I used to do this today a GFCI breaker would be needed to any outside receptacle but this is a way to add a receptacle to an existing circuit / fixture. That would meet your requirements without breaking the bank.

Note you should always use UL listed products and methods when making a modification to a personally owned device or system. Can not be made for resale without a complete evaluation of the assembly.

Not the answer you're looking for? Browse other questions tagged electrical lighting exterior or ask your own question.

1
Why doesn't my replacement lighting work after my old fixture died?
1
Patio Light Fixture To Electrical Socket
1
Garage door lights: which cfl bulbs work?
1
Can you use a dimmer with a can (recessed) light conversion kit?
2
How can I get this light fixture to light up?
0
Why did my light string turn off after a short while with GU24 to E26 to socket outlet adapters?
0
How to replace a CFL recessed light with LED fixture
1
Is it ok to use 14/2 wire out of a light in order to wire a receptacle into the ceiling?
0
Light with Dimmer and LED bulbs blinks when on by itself
2
How can I extend conduit out from an exterior wall slightly?