Do I build my own garden-hose manifold?

It is spring time, and the manifold I used last year is, once again, irreparably broken. Judging by feedback on Amazon, none of them survive winter -- even if drained dry before the first frost.

I'm thinking of building my own -- using a manifold (such as this) and valves like this.

I'll connect it to my exterior faucet with a flexible hose like this one.

The reason I used ball valves is even when they freeze they will usually function when warmed up. I have some that were not drained and the brass cracked but the only time it leaks is when changing from on to off or on to off.

The size of the manifold probably won’t be an issue because of the pipe size feeding the manifold in my case I can run a pair of rain birds to water the indoor arena at the same time and have enough pressure, but if the kids start washing a horse down in the shower stall there is insufficient pressure for the rain birds to overlap. But the automatic waterers in each stall always function and don’t use enough to affect any thing. You may have similar results depending on your flows through the manifold.

. . . will the 1/2" width of the manifold's ports perceptibly limit the water-pressure in the attached hoses?

Ok, for the record -- and to brag -- here is, what I did. From this (the quad-contraption had one of the valves busted, rendering the rest useless): 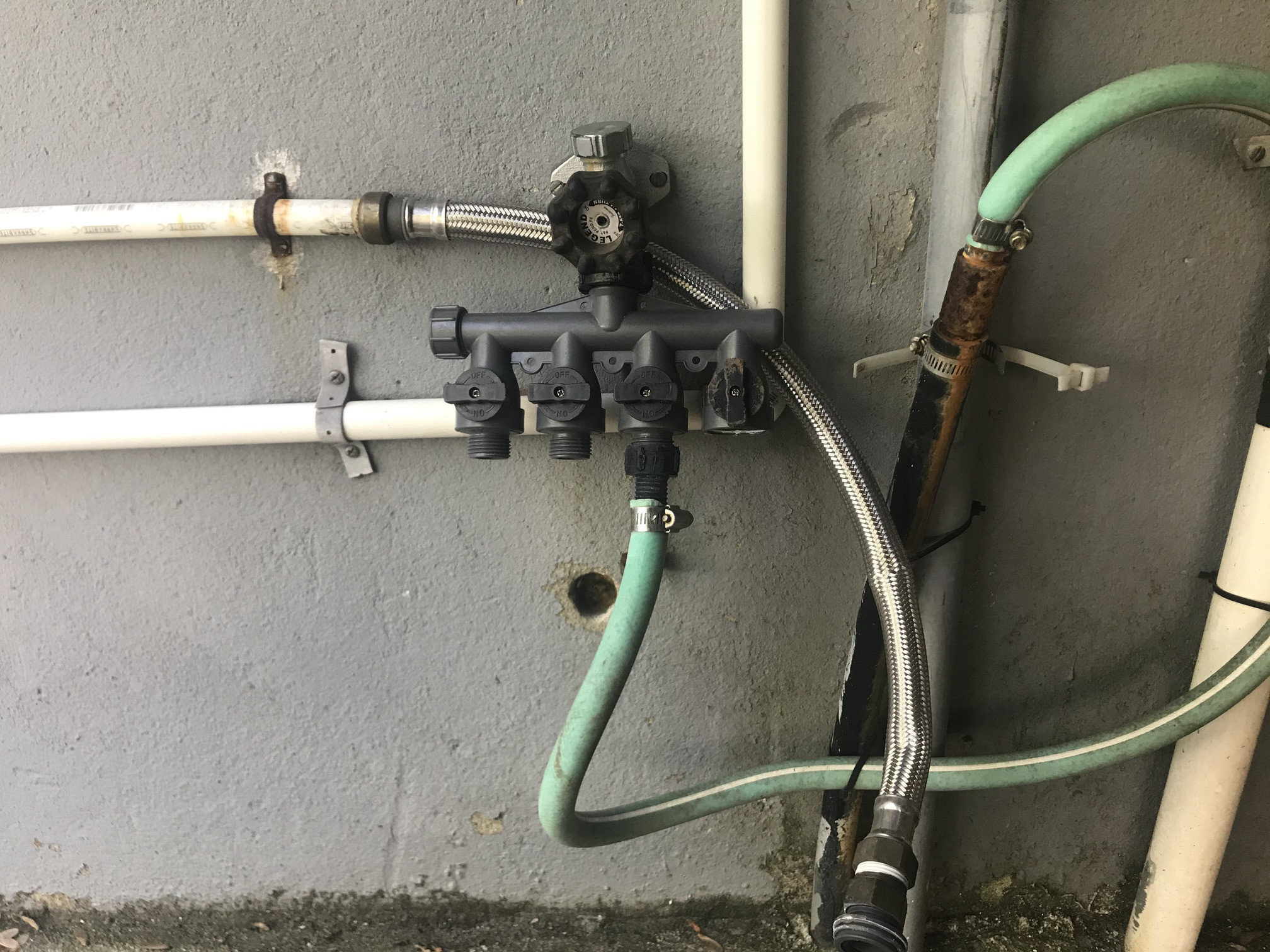 to this shiny and new -- though not yet fastened to the wall: 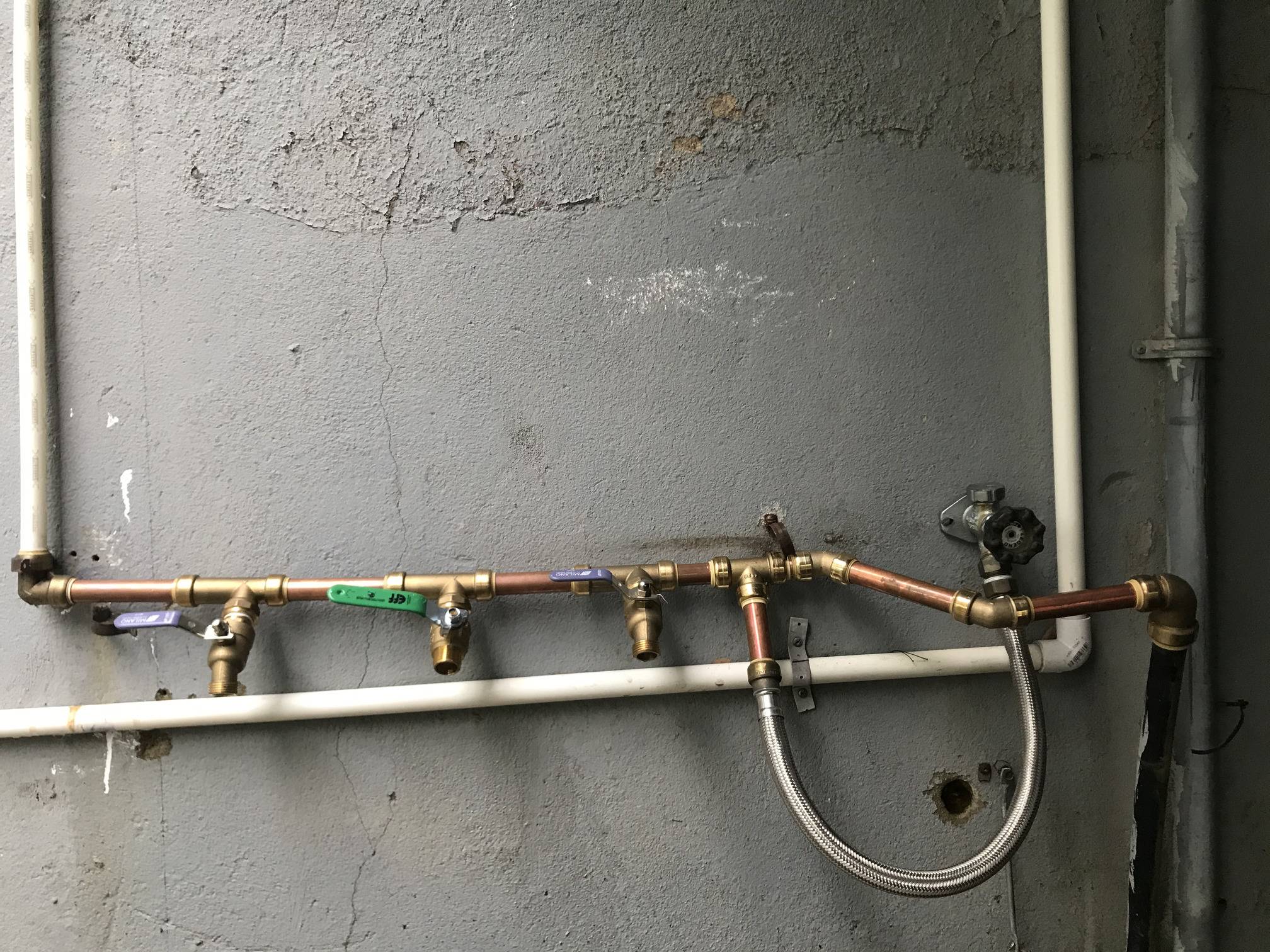 The water source is still the same sillcock

The black pipe (hose?) on the right is buried one, it goes all the way to the backyard's garden (purchased the house with it). Whereas before it was connecting to the manifold using the garden threads, now it has its own push-connection.

The white pipe on the left goes up to the deck -- to feed the children's sprinklers. It also used to connect to the manifold.

Instead of the two free openings I used to have, I now have three -- and one of them has regular NP-threads instead of the "garden" ones. (I'm thinking of switching everything to the quick-connect couplers, this will be the first step.)

I wish I could make the new "manifold" from 1" -- or even 1¼" -- pipe, but nobody makes "push" reducing tees that size, that would still have a ¾" on the side :( I would've had to install reducers, and I didn't want to increase the number of connections further.

Not the answer you're looking for? Browse other questions tagged plumbing exterior spigot outdoorfaucet or ask your own question.

0
A sillcock with integrated manifold

5
How do I seal a garden hose against a nipple?
1
How can I get warm water from my garden hose?
4
How do I fix a leaking garden hose connection?
1
How do I create my own shower hose?
2
Garden hose washer installation - which way?
0
garden spigot adaptor
0
A sillcock with integrated manifold
2
What is the expected GPM water flow for outdoor garden hose?
1
Can I attatch my garden hose to a hose bib on the water main?