This is a follow up from a previous question: (Is this a sign of my roof trusses sagging?)

Do you know how to use ratchet ties (or some other method) to fix sagging roof trusses?

Here is an image of a ratchet tie in place: 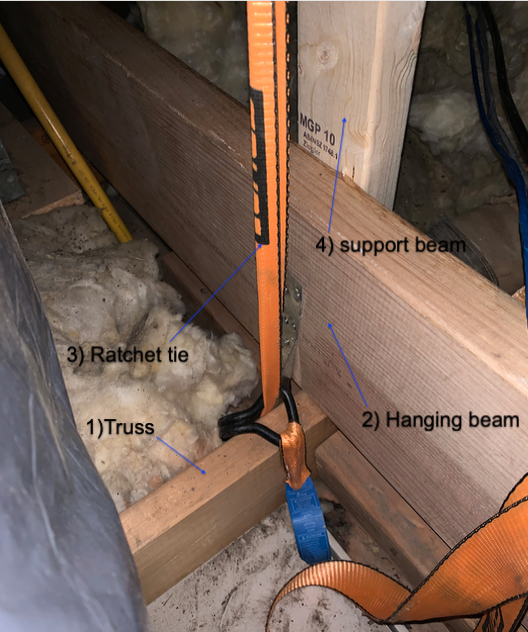 So, this is a 2-storey brick veneer house, built 15 years ago, in south-eastern Australia. Carpernter 1 used some hoist from inside the house to push the ceiling up, then they put in place a hanging beam [i'm not sure this is the right term] for the left half of our roof. This didn't last long before the symptoms of sagging roof trusses began again. A few months later, Carpenter 2 came and temporarily used some ratchet ties, before putting in place some support beams [again, i'm not sure this is the right term] around the same area that Carpenter 1 worked on. This too didn't last long before the trusses began to sag again.

So I am thinking of using some ratchet ties and then just leaving them in place. This will allow me to re-adjust/re-tighten if need be in the future. Also I think I will place them all around my roof, instead of just one area like the previous carpenter. This is because the signs of sagging roof trusses are all around our roof.

[I know people in my previous post told me to go to a structural engineer, but I am poor...we already tried some carpenters in the past, but it seems to have been a waste of money and effort with them...any help would be great guys, thanks in advance.]

roof carpentry truss
Share
Improve this question
asked May 5, 2021 at 1:30

With the ratchet straps you are only hiding a symptom which can be seen from inside your home. It would make things structurally worse in the long run.

Look at your roof line from the outside, is the ridge starting to do something like this? Ratchet straps will exacerbate the issue. 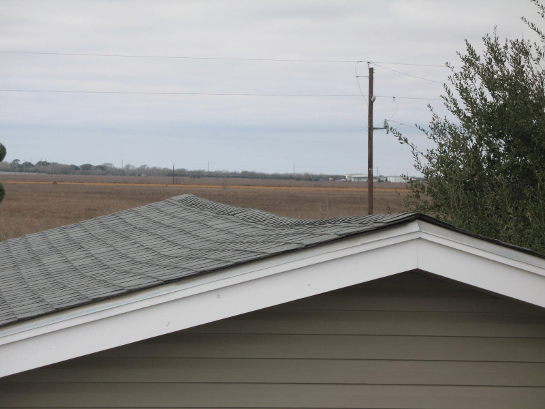 I'm sorry but there is no easy fix. Either the roof was engineered wrong, built poorly, or someone took out a load-bearing wall.

You could try filing a claim with your homeowner's insurance. Hopefully they're willing to get this fixed before it becomes exponentially expensive and/or deadly. If you involve a structural engineer before calling your homeowner's insurance then you would have verifiable proof of the issue and the insurance would not be able to easily cancel your policy to avoid honoring your claim. Do note that this would very likely raise your premium.

Talk to a real estate lawyer. A 15 year old house should not be having this issue. You might be able to sue the builder or previous owner for this issue.

Your question is leaving out one very important detail, what caused this? If you don't know what caused this then it is imperative that you get a structural engineer out there. If the cause of this is a wall being removed then you can get some pretty good answers to solve your problem. And if it was a wall that was removed then you should put back a temporary wall and remove the straps, the cost would be minimal. You'd need a hammer, a saw, nails and studs. When the budget allows you can fix it properly. One of the things about structural work is it's quite expensive to have someone do it but relatively inexpensive to do it yourself. I bought a house where the ceiling was sagging because the prior owner removed a wall. The day I bought it I put up a temporary wall. Two years later I fixed it with some posts, a beam and proper joist hangers. Also those "hangers" your carpenter used should go up the entire width of that beam. Only nailing into the lower half can split the beam. Not that I would bother changing them but just showing you that your carpenter probably wasn't qualified to repair this.

Not the answer you're looking for? Browse other questions tagged roof carpentry truss or ask your own question.

9
Is this a sign of my roof trusses sagging?

7
Should I replace my roof or just fix it?
6
Will combining roof venting systems cause short cycling?
1
How can I safely reinforce my garage trusses to support ceiling drywall and insulation?
0
Rafter tie sizing
0
Convert timber roof rafters to trusses?
0
Can you space trusses more than 24" on center if you use 4x4s or 6x6s for the lumber instead of 2x6s?
9
Is this a sign of my roof trusses sagging?
0
Changing roof truss diagonal to vertical
1
How do I remove the bottom chord from a shed roof, the right way?