Do I need this special strike plate on my laundry room to garage entry? It's creating problems with a new lock

Good day everyone. I recently replaced my existing keyed Schlage lock with a keypad security lock on the door from my mudroom to my garage. The door is metal and the frame/jamb has thick rubber/silicone weather stripping. The new lock has been in place for a few months but the lock cylinder has become damaged do to extra stress created by the weather stripping and the new strike plate used over top of some weird sort of metal bracket that was installed with the previous lock.

I can't explain it well, but the weather stripping pushes the door back inward, toward the very edge of the strike plate. The new strike plate, installed over top of what appears to be a security bracket (?) is a tad too far and the deadlock plunger has become bent as a result. You can see this in the pictures I provided. This causes the latch to bind and not close fully. I can replace the latch but that won't fix the stress on the part caused by the use of these two brackets/strike plates.

Do I need this weird looking bracket? Without it, the door will shut fine without the added stress on the latch or deadlock plunger. I assume it's for added security as the rear of the strike plate has teeth that grab into slots drilled into the frame. I can't even find a name for this part.

I'd like to just be able to not use it and use the strike plate that came with the lock instead, but I feel removing the bracket will affect the security of this door. What can I do to give the door more room inside of the strike plate? I can't get the door to sit any tighter against the existing weather stripping.

Thanks for your suggestions. 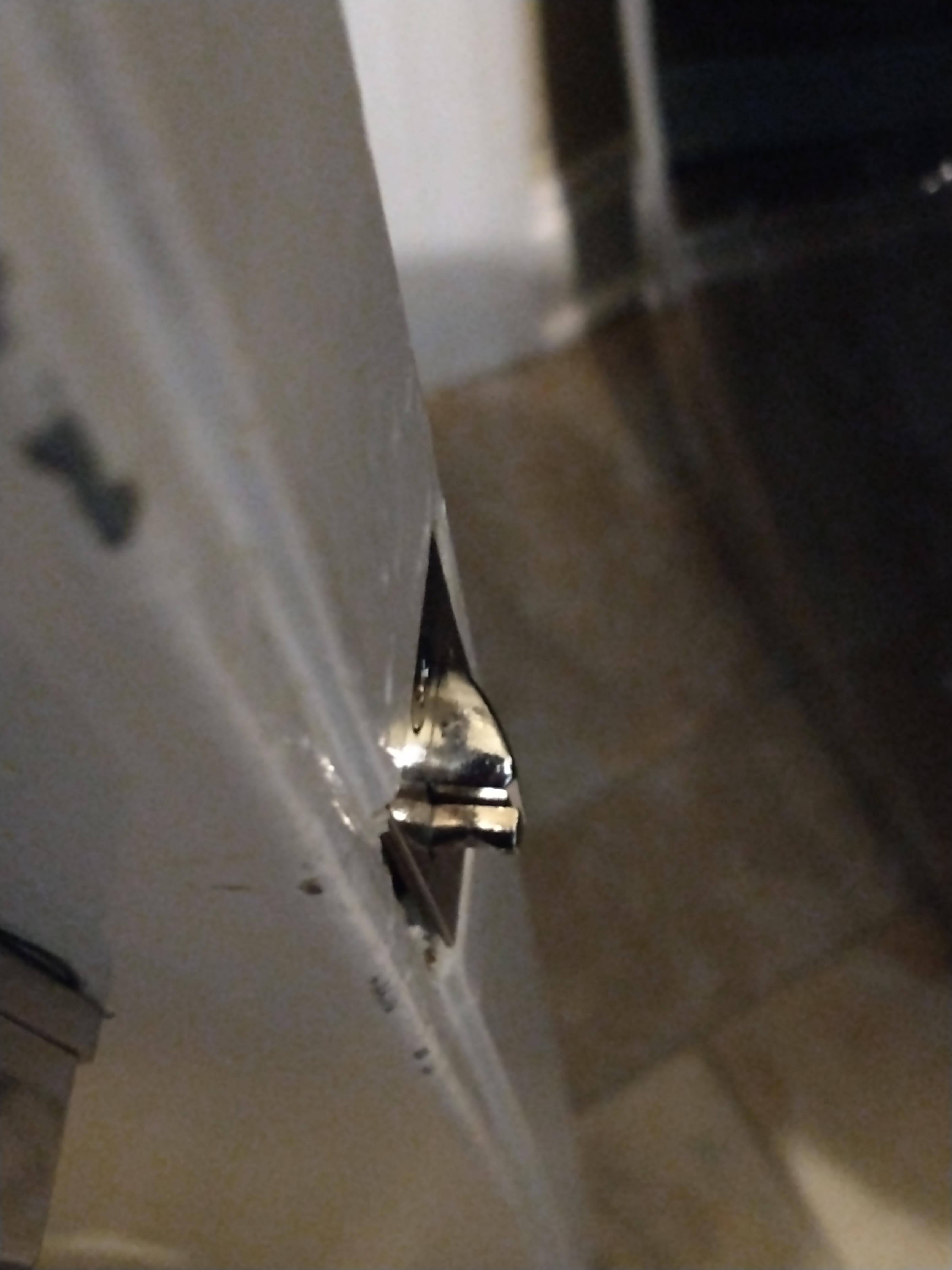 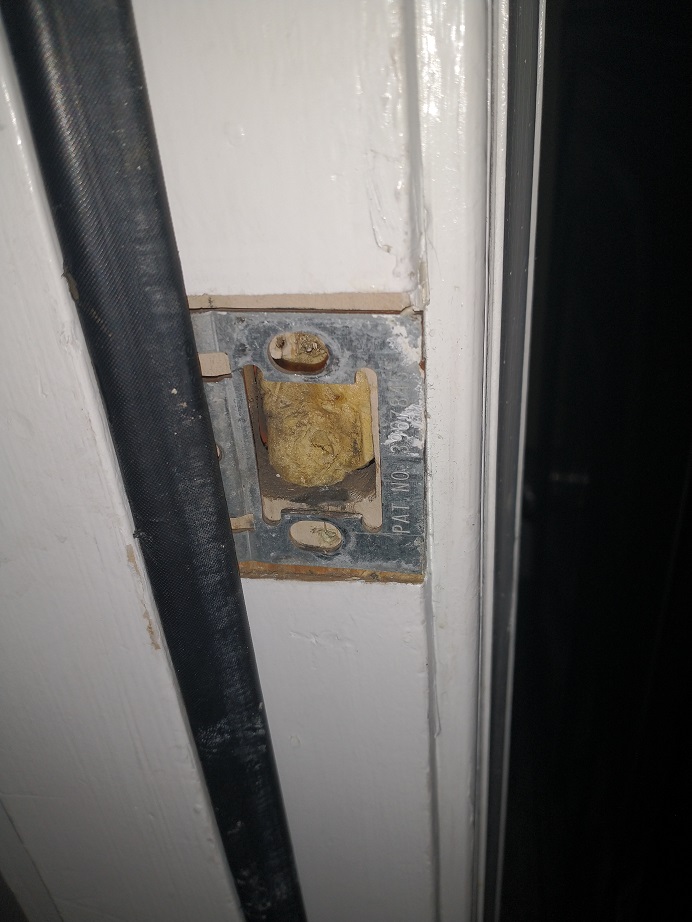 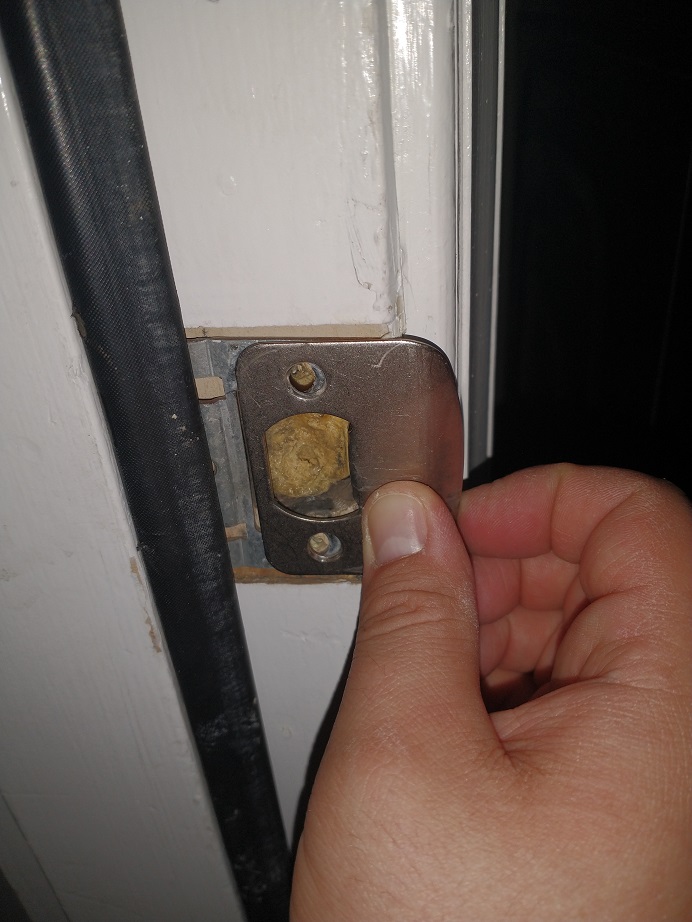 That little plunger is called a dead latch. It requires precise and correct alignment between the door latch and the strike plate with no excuses.

The purpose of a dead latch is that if it is held in, the latch can't move. This defeats "using a credit card" to force against the latch's ramped piece to make it retract.

Too big a gap between door and strike plate

Part of your problem may be the strike plate being too far from the door. (I can look right at the weatherproofing and tell you that!) In that case, the beveled latch is only going partway into the hole, and that is leaving room for the deadlatch to fit also.

The gap between door and strike should be very close - you should barely be able to fit a credit card in there. I bet you can fit about 6 credit cards in there!

I also notice the latch is "inset" from the edge of the door. That shouldn't be. You need to shim that back out so the latch is flush or even very slightly proud of the door edge. Here, every mil matters. 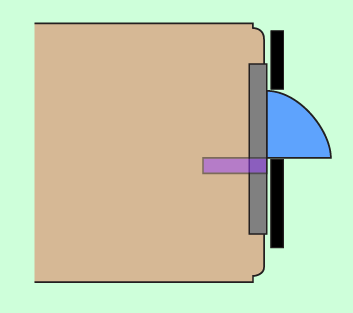 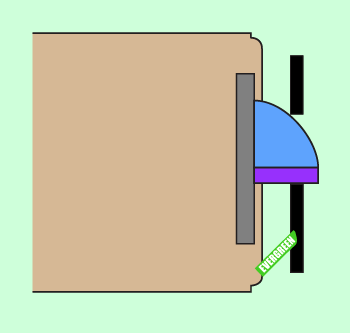 ^^ Yours. Note too-big gap and too-inset latch allowing deadlatch to fall in.

If a door is not weatherproofed, there is a well-defined point where the door is positively closed all the way. With this type of weatherproofing, after the door first contacts part of the weatherproofing, you can lean on the door harder and harder, and the door will keep closing, moving more than 1/4" additional if you lean on it hard enough. This makes correct positioning of strike plate extremely difficult, but also, all the more important. It's a mistake to set the strike so the door is too loose; first it will bear a lot of dynamic force from being loaded in both directions by the wind, and second, people who pull the door shut hard will drag the latch past the strike plate, making for very sloppy latch action... and (again) allowing the dead latch to fall into the hole if the strike plate is too far away.

You say the oval screw spaces in the reinforcement are in the wrong place. I doubt that. I suspect the weatherstripping is making you want to put the strike in the wrong place. Since you're already having trouble with the dead latch dropping in, clearly you're already putting the strike plate too far out, and it appears you are near the outer limit of that oval. I suspect correct placement will be closer to the inner limit, but this will make the door very stiff to close, and you don't like that.

The wood may be too beat up to take screws

It's also possible that the wood "meat" the strike plate screws go into has perished from over-use, and/or the existing holes simply making it impossible to get a screw to go in the correct position (since the screw seeks the existing hole). That thrashed wood fiber needs to be drilled out and replaced with some sort of filler. I would drill it and epoxy in a softwood dowel. It needs to be about the hardness of the underlying wood, not much harder or softer (or drills will "seek" the softer material).

You could use an epoxy with filler instead of a dowel; a blend of colloidal silica and fairing filler (e.g. West System 406 and 410) would be a nice compromise between softwood hardness and strength.

I've also heard of people driving match sticks into the screw holes (NOT with the flammable heads!)

So... it sounds like the door framing has been a real "slop job" and these issues were simply ignored by past installers.

You will need to move through each issue and correct it.

That backing plate could provide some added security. With a metal door the jamb is the weakest link so the plate, if properly installed could help. It should be possible to install both strike plates in a way that is compatible with your lock.

Note: The backing plate is not installed correctly to begin with. You see on the far left side, behind the weather stripping, there is a third screw hole. You are meant to put a long (3 inch) high quality screw through that. The idea is that instead of the two other screws ripping open the front half of the door jamb in a kick-in, that third screw would require the kicker to break through almost the entire thickness of the door frame.

If you install that third screw, then try to figure out what exactly is causing the whole arrangement to interfere with your new lock. You may need to chisel out the inset a tiny bit or to make some other adjustment.

From the patent filing on uspto.gov:

Without it, it may be possible to kick the door in. From the crack in that bracket, I suspect it was tried at some point.

You answered your own question. Just remove that part. There are other ways to secure that door if you feel the need to.

Not the answer you're looking for? Browse other questions tagged doors lock carpentry door-frame or ask your own question.

0
Big gap for interior lock
0
How to stop door knob latch from twisting and sticking on strike plate?
0
Is my doorknob handleset installed correctly?
2
Lock can be opened with credit card even when deadlatch is fully depressed
2
How to remove strange looking strike plate
1
Adjusting deadlatch so it doesn't fall into strike pocket
2
Latch bolt stuck inside door jamb
1
Backplate for satin nickel deadlock