How to enter surface-mount main panel from back w/ a 1/0 Al SER cable?

The main service panel is surface-mounted on the outsde, on the siding. The wall is 2x4, wood T111 siding, drywall inside (garage) and can be exposed/accessed easly from inside.

I was thinking about using a conduit right angle fitting to ease the bend (strip the outside sheathing from the SER to ease MBR, after it enters the fitting) but not sure if code/inspector/sanity allows it and how to secure the cable to the fitting?

BTW, There is already an existing, in-service sub panel feeder which enters from the rear via a regular NM clamp connector. The old cable is "thinner" so the bend was easier (though still 100A breaker). This must have been inspected as it was installed when new 200A service was installed so a non liquid-tight was ok? 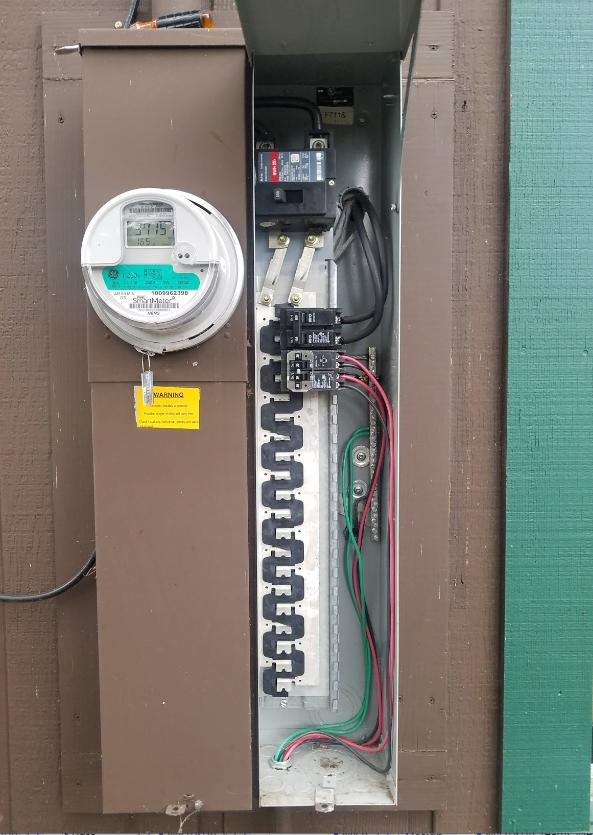 On a seemingly unrelated topic, I like to see houses have LOTS of spare breaker panel spaces. Spaces are cheap, and in the future stuff always comes up, and nobody has ever posted "Help, I want to add an RV outlet, but my panel has 18 spaces available. How can I squeeze it in?"

Now, given the thickness of the cable, I do not see way to make that bend. What I advise doing is installing a LARGE junction box on the inside of the garage wall. Now your SE-R cable can enter that box vertically, transition into individual wires, and go through a conduit nipple from this inside box to the outside box. At that point we're only concerned with radius of individual wires, and that's no problem.

Why a subpanel, of course!

So if extra breaker spaces wouldn't be useless, the best answer may be to fit a large subpanel on the interior of the garage. "Large" because you want full width, and enough height to handle the large wire bends.

And that's exactly what I'd do. Select a 200A-bussed, main-lug but convertible subpanel of 20+ actual spaces (not circuits).

I'd arrange the new panel back-to-back with the existing panel, using a "nipple" to connect them that is as large as the knockouts allow.

If the SE-R cable's internal conductors have their own markings (as XHHW conductors) then you can enter the new subpanel with a grommet/cable clamp, then pass right through the new sub and into the original panel - at that point you're just using the sub as a giant junction box.

3
What are my options for running feeder cable into an exterior main panel?
1
How much NM cable can I fit in a conduit?
4
Cable securing/support, conduit, etc when exiting main service panel: questions
1
Flush Mounted PVC Electrical Junction Box or alternative ideas to supply two sub-panels
2
Subpanel feeder cable type to code?
2
What size wire and pipe for a 125A subpanel in an attached carport?
1
Can I Replace This Junction Box with a Subpanel?
3
60A Subpanel with feeder wire spanning a finished section of the basement
1
Can a panel ground enter through the same opening as the power cables?