How to verify water-feed entry-point into 2nd floor?

A 2nd story living quarters is perched atop of a ground floor office.

There is high certainty based on history and observations that there is a slab leak: assume this is the case for this question. It is desirable to find the water feed into the upstairs (entry point for a bypass).

There is a very similar second office / apartment configuration that has a copper pipe, that comes out of the slab, travels behind an office wall vertically and bridges and provides water to the 2nd floor: 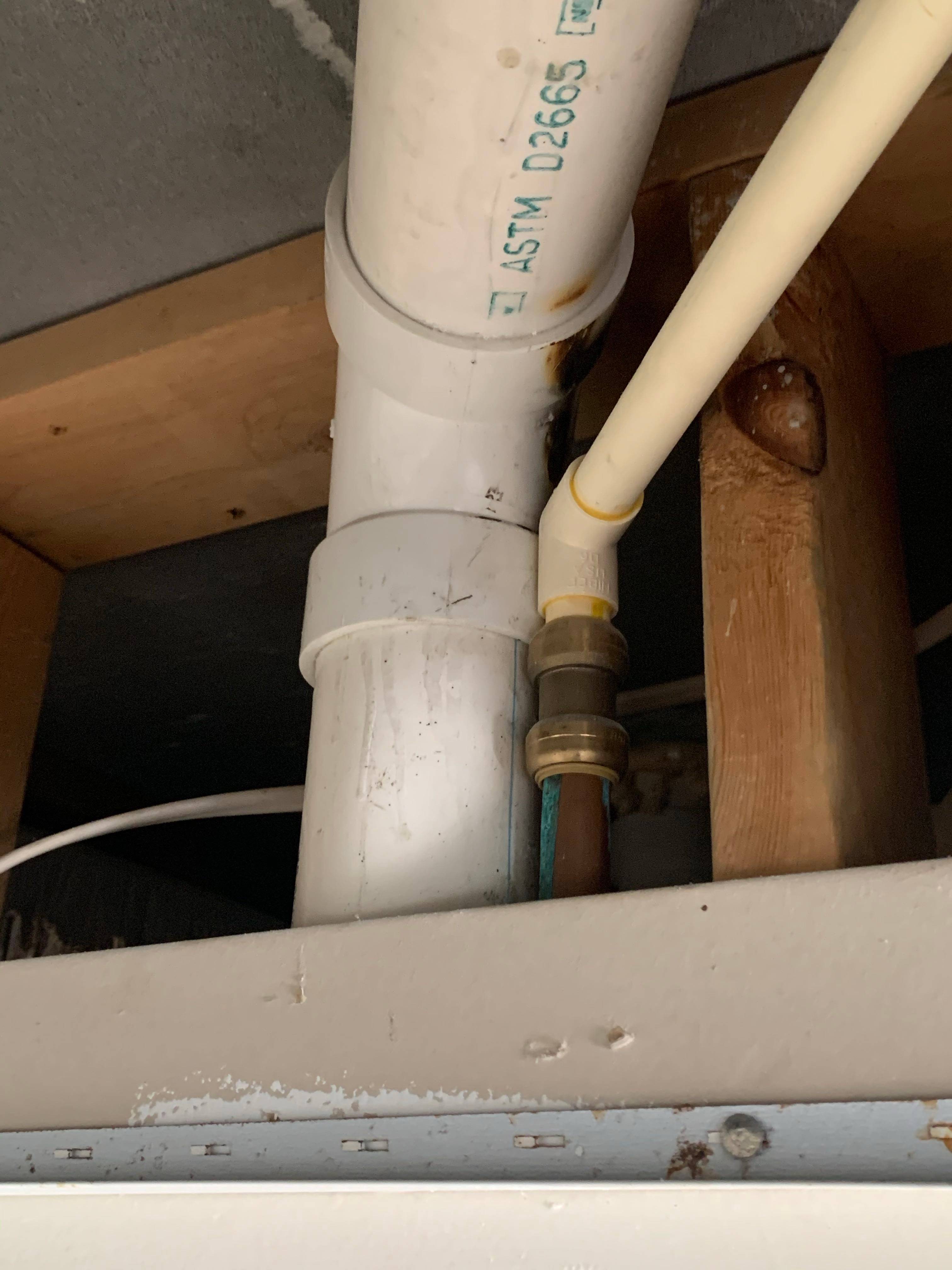 The above photo is for the second office. The pipe in question is all copper. It was verified (by cutting the PVC pipe) that the small PVC pipe is the water-feed for a 'sister' location.

A visual inspection was performed to find the water feed for said apartment: a copper pipe candidate is thought to be the the water-feed. 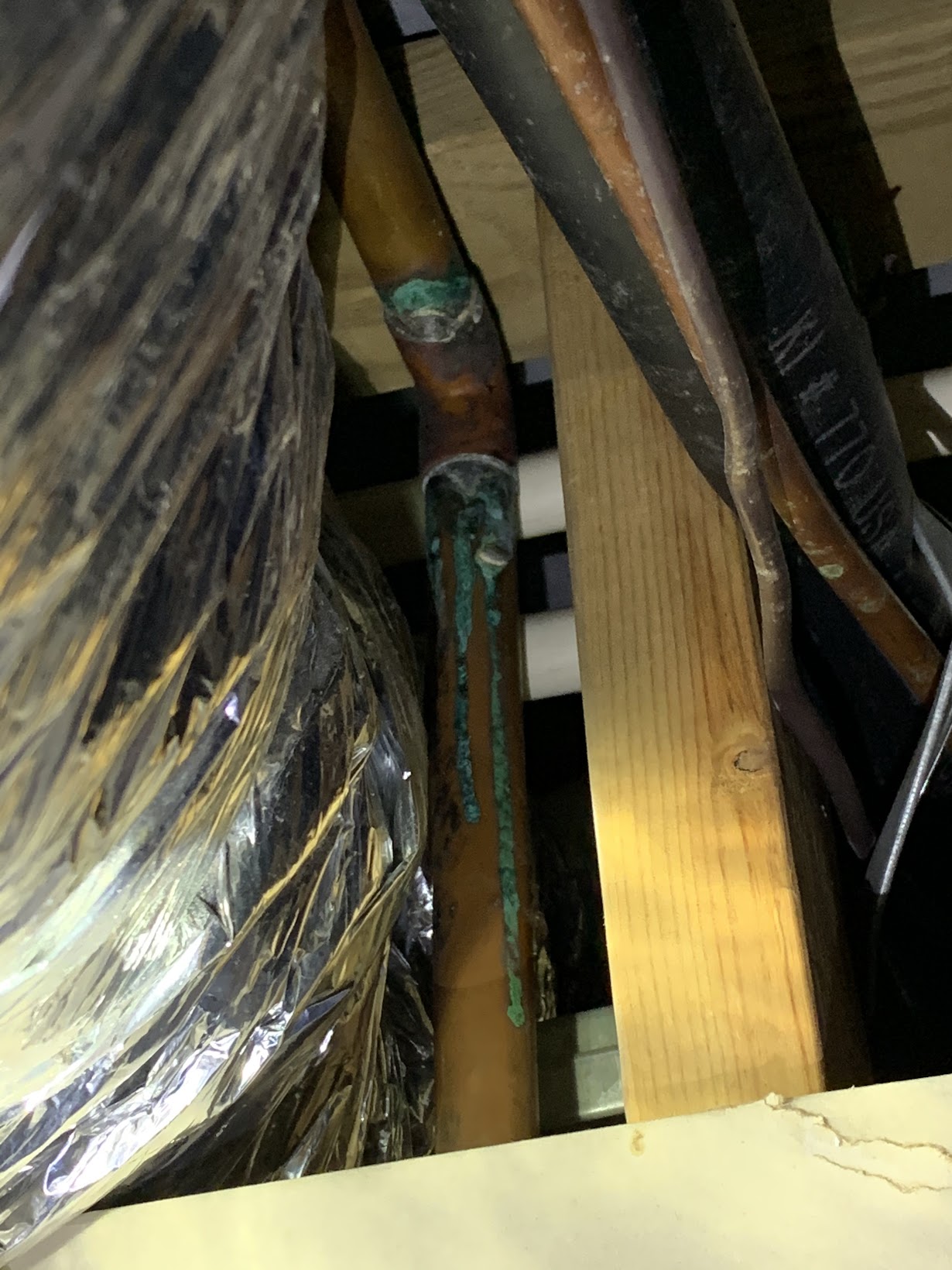 The goal is to confirm that it is the water feed without cutting the pipe.

What tests can be performed on said candidate copper pipe to confirm that it is the water feed? Tests that are simple, easy, can be performed without elaborate tools (especially avoiding cutting) are appreciated. Thank you

with all the water off heat the pipe at one location then turn the water on and see if the heat moves in response to this.

the heat is going to move slowly by conduction with the water off, so it may take a few tries to get a definate answer. you could perhaps measure how fast the hot spot cools, with and without water flow.

The vertical copper pipe at the top of the drywall is the slab pipe. This answer documents the details and thought process that confirmed the hypothesis.

I hope this answer helps a future reader.

Because of time constraints and I believe I had a 90+% chance I had the right pipe. The goal was to minimize any water released when cutting the copper pipe in the ceiling.

From the outside, I wrenched the slab pipe open slightly so that the water in the slab would drain. It drained very quickly, which signaled the pipe is close and increased my confidence. The next step was to cut the copper pipe in the ceiling: creating a water feed input port and slab pipe output-port.

When the copper pipe was cut, a few drops of water dribbled out, which again boosted my confidence I had the right pipe. To confirm that this ceiling copper pipe is the extension from the outside, I temporarily connected a PEX pipe to the hypothesis output-port with a Shark-bite push connector for easy install & removal. The open end of the PEX pipe was positioned outside next to the water valve.

This setup allowed me drive water through the leaky slab pipe and out the new PEX pipe. The water that flowed through the PEX pipe confirmed the hypothesis that said ceiling copper pipe is connected to the outside valve and the upstairs feed point. 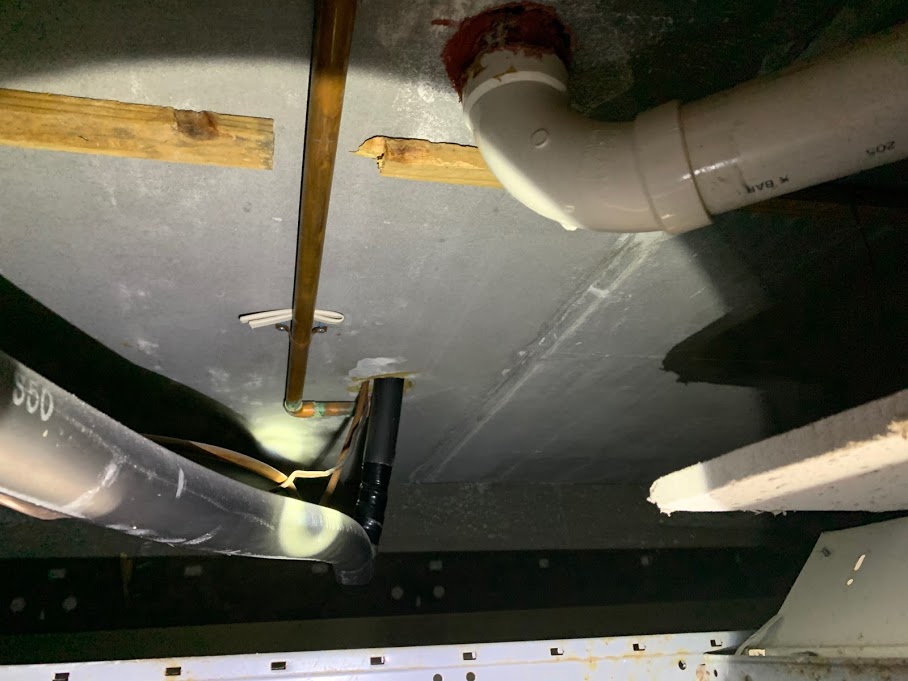 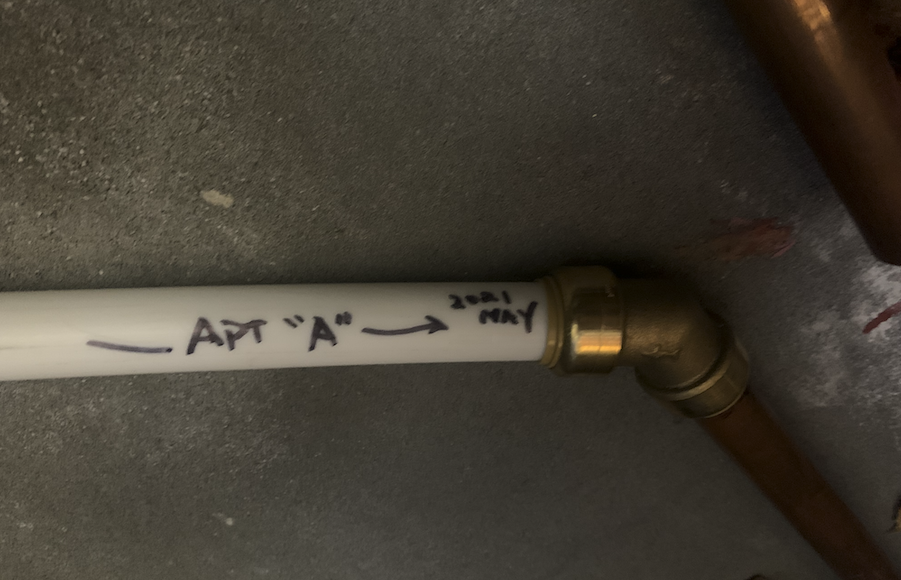 10
How should I configure my plumbing with PEX?
0
How do I plumb an outside line to a roof deck faucet?
1
2nd floor laundry room drain spraying water up into room
0
How can I locate the water main entry point to my house?
3
Hot water pipe sticking up in back yard?
4
Repairing leaking DWV vertical 3" thin wall PVC
0
Water seeping through where pipe exits slab foundation
3
Would increasing pipe size just after the meter give better flow without increasing pressure too much?
2
Identifying a cast iron hub
0
Is a bleeder-valve to let air into the water line necessary when the plumber put in a frost-free valve? Should a bleeder-valve leak if kept open?