Is it safe to use a drill bit with a half broken tip?

I broke the tip of the masonry drill bit. The tip looks like this now. Half of it is missing, and it seems that the tip itself moved slightly towards the center (since at the bottom, it is parallel to the shaft). 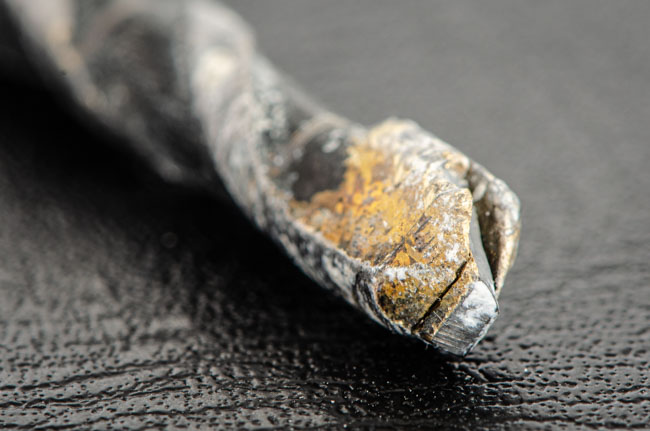 Is it still safe to use the drill bit, or is there a risk that the remaining part of the tip would detach when the drill is turned on?

The fact that part of the bit has broken off does lead one to believe the rest of it may be in danger of disintegrating during use with the potential for bits of metal to go flying in unexpected directions.

Also, the fact that the point appears to be off-center means that you're going to have a hard time getting the bit centered where you want the hole to be and keeping it centered while drilling.

While masonry bits may not be the cheapest bit in the aisle, it seems that now would be a sensible time to replace this one.

It's really no less safe than it was to begin with. Carbide bit teeth can release from spin one and fly around. In my professional experience we used such bits until the carbide was completely gone.

Masonry bits don't drill, per se. They disintegrate material through impact, like tiny jackhammers. There's always the chance that debris will be ejected. The carbide blades on the bit don't pose more threat than the concrete itself. They aren't spinning at a particularly high rate.

Questions of safety are always subjective and a matter of personal risk tolerance, so you be the judge. Use eye and ear protection (and a face shield, if you like) and carry on. Replace the bit when convenient since this one will function a little less precisely.

It's only going to be half as effective as it was, with one half missing. Using damaged tools is hardly sensible - they don't work as well as good ones. Probably not so much dangerous as inefficient. To prove/disprove this, buy another, and drill the next two holes, one with each, consecutively. Somehow, I guess the old one will be pretty lame in comparison.

Bits break all the time even in the best conditions. There's nothing particularly unsafe about breaking a bit unless you happen to be sticking your head+eye right next to the drill for some strange reason.

The bit does look like it's on its last legs however. I'd be surprised if it still even works. You could easily break off the carbide center part, and get it stuck in your hole. Now you have a much larger problem. Buy a new bit, and throw that one away.

It's not a matter of safety, but of being able to still drill holes with it.

Normaly, a drill bit is (mostly) symmetric at the tip - it has a small number of "flutes" (the indentations at the sides, which allow material to exit the hole that is being drilled), and they converge to however many small edges or "blades" at the tip.

During drilling, each time one of the edges is in contact with material, a force acts on the edge and thus the whole drill bit. These forces individually try to push the drill bit sideways. Especially for drilling (and to a lesser degree for milling), it is imperative that these forces cancel out. Neither drill bits nor the actual (often hand-held) machines are designed to offer much resistance to a net sideways force.

You know this from the feeling of the drill bit wandering around when you first start the drilling operation: at this point in time, there is nothing opposing these forces as the hole has not been started yet. That's why one often drills a small pilot hole, or smashes the surface with a pointy object to have something for the actual drill bit to bite into.

Milling can and often does function in the presence of these sideways forces because the machines are much more heavy (often ranging in the metric tonnes instead of a few kg), and have very substantial quills which can stomach significant radial forces; also the milling bits are often much heftier. You still want to make the bits and the quill as short as possible to reduce the lever, but still, as opposed to drills, they are designed for this.

To answer your question: it is not a safety issue, but you will find that you probably cannot even start a successful hole with it anymore - it will wander around very badly, scratch up your wall or stone, and just be a total mess. If you use it in a partially drilled hole, which gives guidance to it, you will probably be able to drill with it - it will just chew through the material with brute force, and if it were not a masonry bit but one for wood or metal, the end result would look ugly; but in the case of stone this won't matter really. Also, since the bit will press against the sides of the hole, it will become very hot; take care not to burn yourself when taking the bit out of the machine. But as said, I'd expect that you simply will not be able to achieve much with it either way.

It can and will eventually break completely, but you should be wearing eye protection anyways, as there is always a possibility of little stone pieces flying anywhere, so it's no issue from a safety standpoint as far as I'm concerned.

I would replace that masonry bit with a new one. If you are drilling a large hole in solid masonry it would be wise to drill a hole with a smaller bit first, similar to drilling in steel, and then finish the hole with the larger bit. Also, if the bit does not drill into the concrete with normal pressure, do not overpower the bit with extreme force. That will just break the tip and shorten the life of the bit.

Depends how important the hole is.

This drill is likely to oversize the hole, and make it not-round. But that may be acceptable in your situation.

If you're drilling though something, the exit hole is likely to be more ragged. If you're doing a blind hole, or if the other side is okay with spalling and breakout then again, up to you.

The drill might fail at the tip, dropping shards of metal in the hole, again might be okay, specially if you blow it out with compressed air and watch out for ejecta.

If the bit breaks while you're leaning on it, then you could be surprised. I would not use this drill bit at height, from a ladder or similar, but I might use it on the ground. You should definitely arrange for a replacement now, you've got almost every cent possible out of that one.

Safe? Meh, you probably won't get hurt unless the bit snaps in half unexpectedly and your forehead introduces itself to the material you're drilling.

Effective, probably not. You will notice much slower progress with new holes, uncentered holes, and even holes that are larger than expected due to travel/wobble. You will very likely overheat the bit very soon if you use it and then it will make no progress at all.

Buy a replacement and have it on standby for when this bit becomes completely useless.

The likelihood is that the tip will break off in the hole and you won't be able to retrieve it. This will make it impossible to drill further and probably damage any new bit you try. There is a good possibility that the untipped drill will melt and weld itself to the inside of the hole together with the broken tungsten. If the location of the hole is not critical, you might like to try this and report back as to the result.

Disclaimer: I don't know whether this will be safe so at least wear goggles and take all other necessary safety precautions that are necessary. The shaft of the bit may break outside of the hole causing flying debris. Danger to eyes!

One of the differences between masonry drills and many other types of drills, is the construction. Mostly when it says "masonry", it's a piece of metal with a couple of pieces of carbide brazed to the end. The carbide is incredibly hard (slightly below diamond), but be clear that it's this piece which does the drilling, not the "pole" that the carbide is brazed to.

Usually the rest of the "drill" will be shaped in such a way to carry away the debris. However, it's not particularly involved in the drilling process itself.

However, if you still have the carbide piece you are within your rights to braze it back on! Likewise if you have a sharpening system which can touch carbide, then you can put a tip back on the remaining piece and see how it goes.

To be fair, nothing stops you taking all the carbide off any just sharpening the remaining steel. There is a super video by "This Old Tony" on youtube which will talk you through the theory of how a traditional drill is actually working and with that knowledge you can basically take a plain rod and turn it into a "drill" (not a serious proposition, but it will teach you a lot about how to sharpen one that you bought from the shop)

However, you will find that simply sharpening what remains, ie without the carbide, will go dull extremely quickly, probably you need to resharpen more than once for each hole you drill. However, keep it cool and who knows... When I had nothing else available I confess I have misused a wood drill of the right size to drill masonry, needed to put a point on it twice, but it did the job.

In summary, there is nothing magic about drill bits. They are just sharp points with some relief to allow the cutting action, and a channel to draw away the debris. Have at it!

It appears that you have broken the hard solder that holds the carbide tip to the end of the steel shank. Your cutting edge is no longer anchored in place. Time to sling it and buy a new one.

EvanEvan
1
Add a comment  |
Highly active question. Earn 10 reputation (not counting the association bonus) in order to answer this question. The reputation requirement helps protect this question from spam and non-answer activity.

Not the answer you're looking for? Browse other questions tagged safety drill drill-bit or ask your own question.

13
How can I protect my hands when using power tools?
4
What sort of bit can I use to drill out a thin seized screw?
3
Black and Decker drill bit set with Kobalt drill?
0
Remove broken setscrew in an already damaged hole?
14
Masonry bits dulling after 3-4 holes
1
Broken drill bit is stuck in DeWalt drill
0
Proper drilling
0
Is it safe to use short bits from manual screwdriwer with electric drill?