So I have a 2x10 floor joist that's only about 5 feet long (short because it only spans a rounded part of my house) which has termite damage at one end for about 1.5 feet. The damage is on the outward side of the joist making it much thinner than 2" once the damaged bits are flaked off. The end sits on a notched sill on the curved wall on the masonry since I have brick exterior walls. The notched sill area is not wide enough to have 2 sistered joists rest on it. It is the first joist and doesn't really seem to have much weight or load on it since the load is mostly on the exterior brick wall at that spot.

If I were to do this myself - would I cut out the affected end by a few feet and replace it with a partial new joist which I sister to the old joist, or should I just replace the entire joist since it's only 5 feet long in its entirety?

I am assuming that I can't just sister it the whole length since the edge of the sister can't sit on a sill?

The joist goes in front of the hvac register so I shouldn't have to cut any duct, just maybe hold it up if the register edge is screwed into the joist.

Images below and I drew a blue line in the floor plan of where the beam is along with the red line indicating the termite damage. Note that the white residue on the wood is from the BoraCare termite salt that was sprayed on - the wood is normally a nice brown. 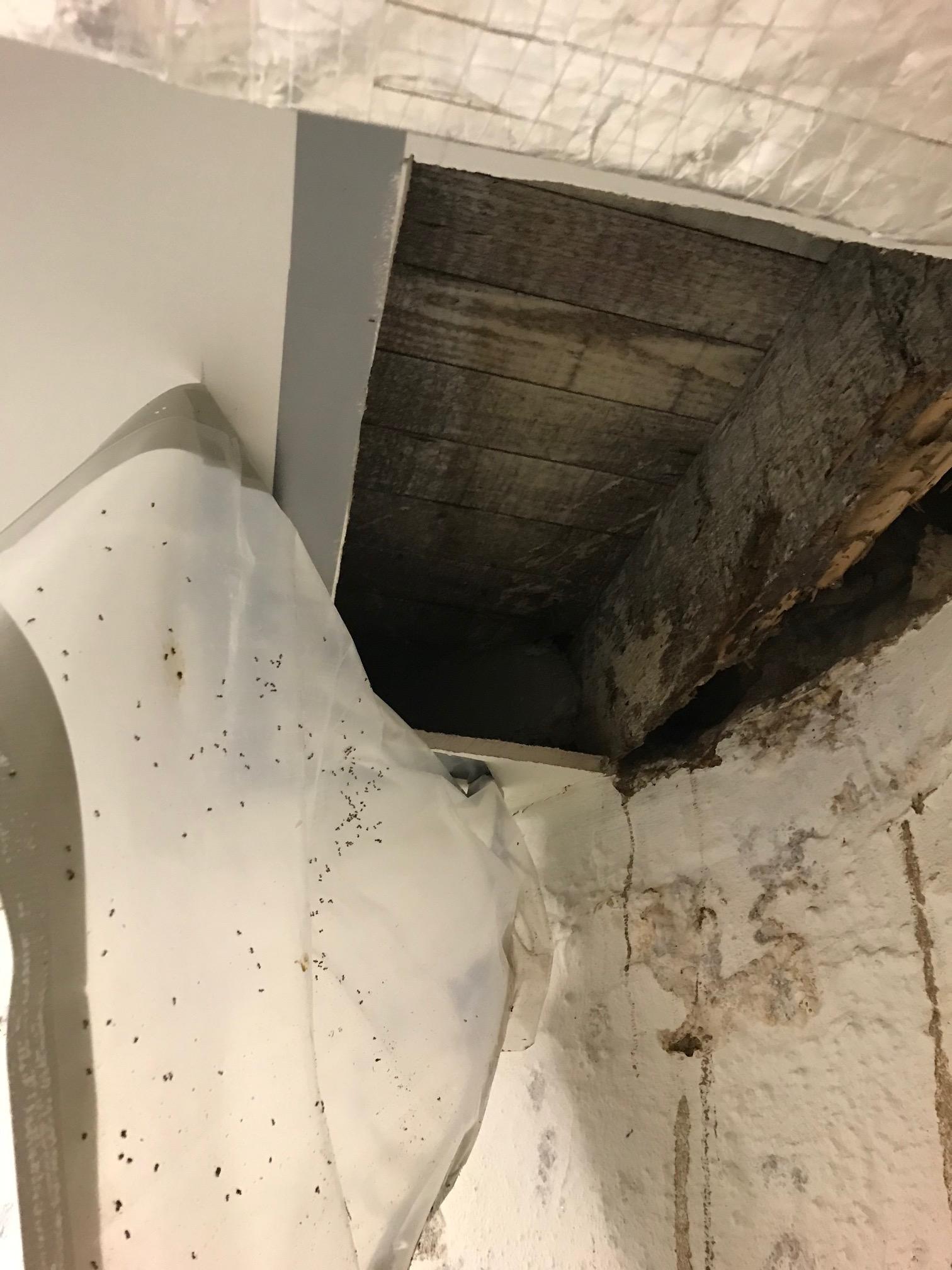 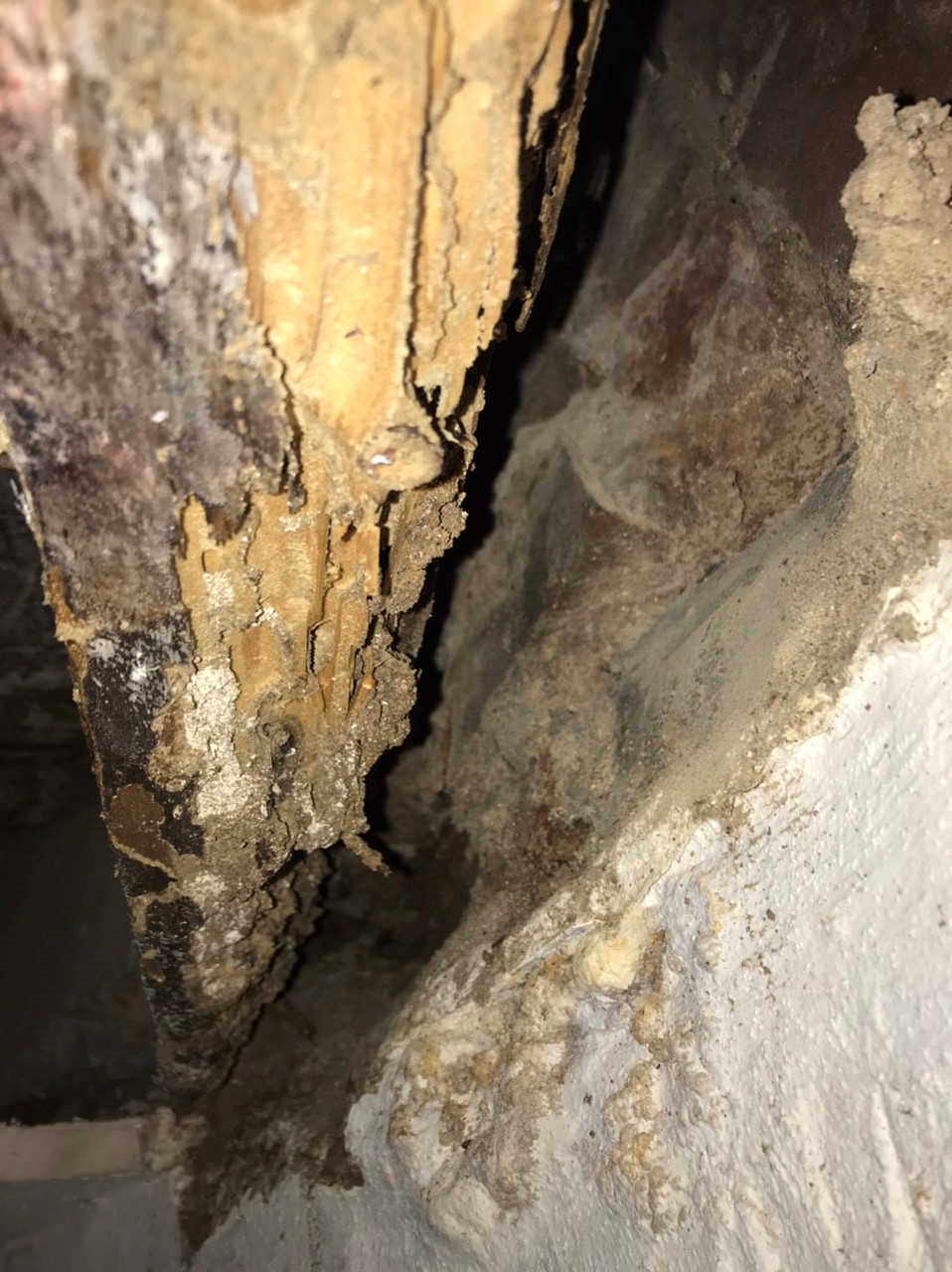 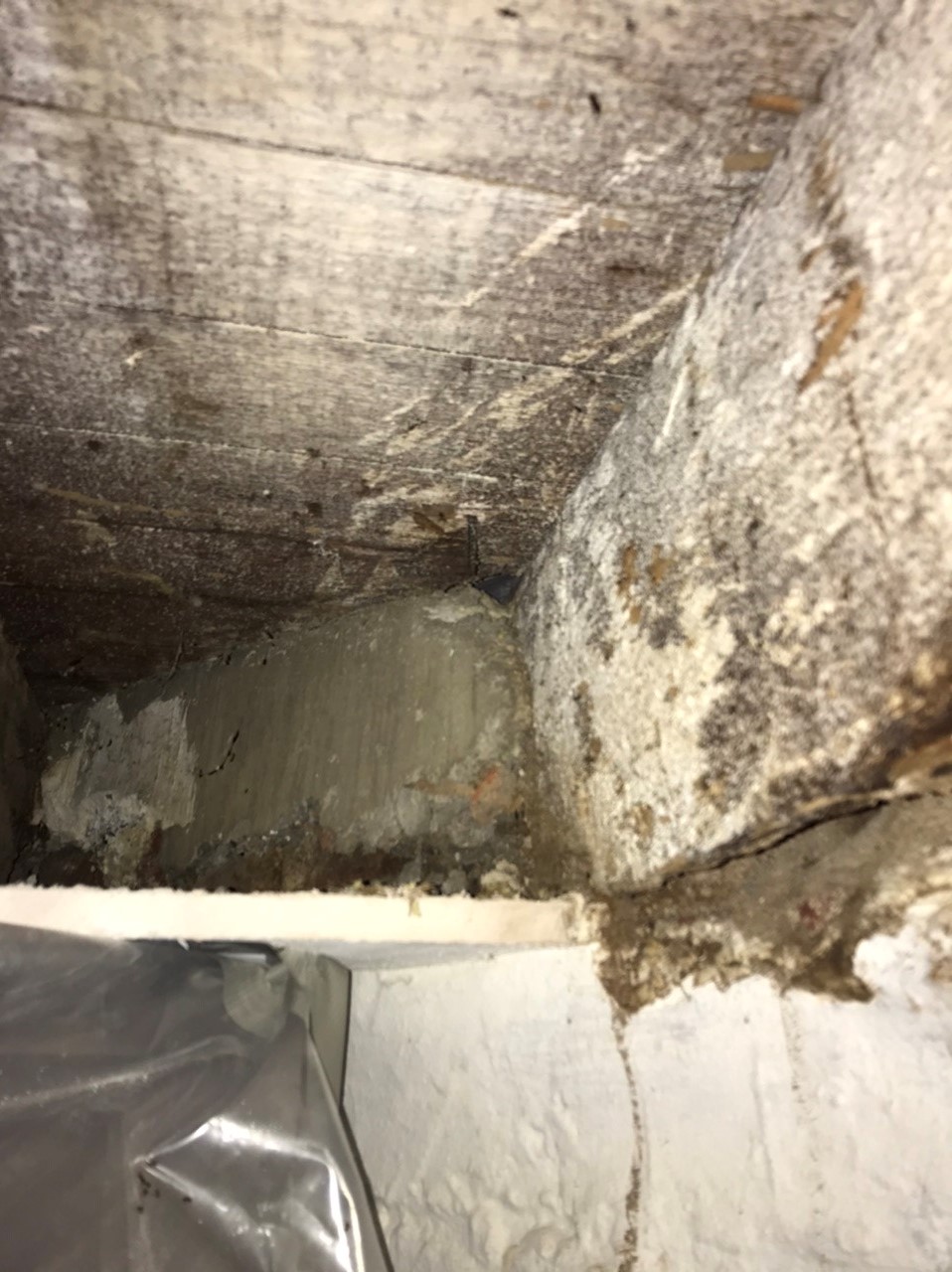 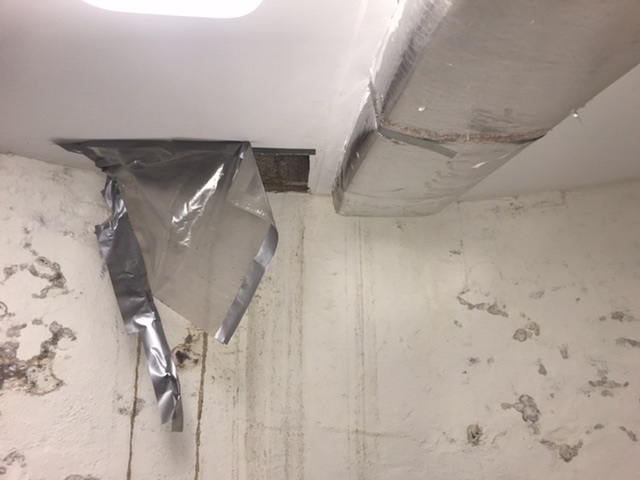 In case anyone is interested, I ended up have 2x8s bolted/sistered together to replace what turned out to be an actual 3x8. I used some shims on top of the brick sil.

To get it in, broke the concrete cap in the notch, put in the double beam, and then re-cemented it back in. 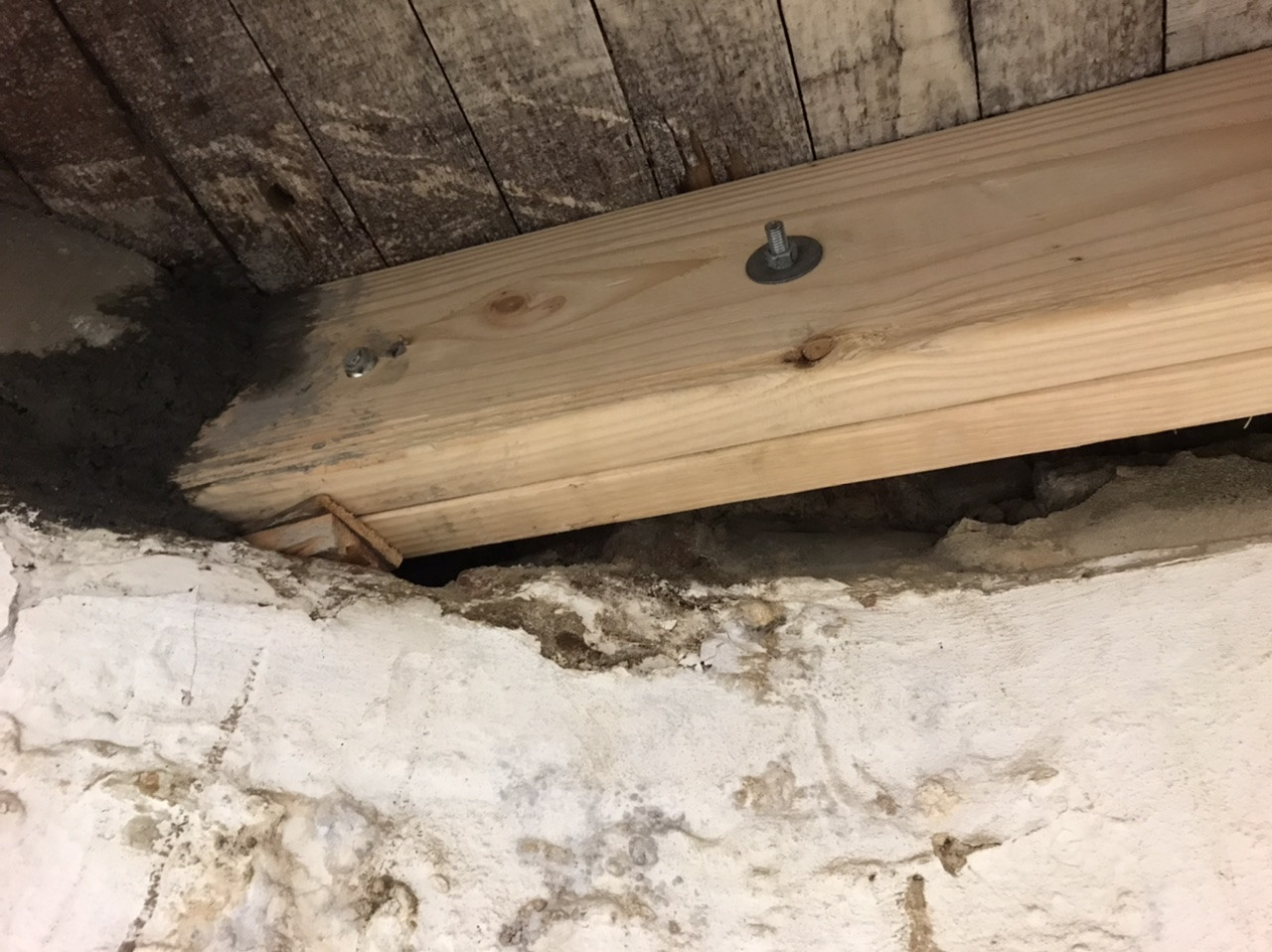 In my estimation, that is not at all load bearing, it simply holds the flooring above up to keep it from being bouncy.

As short as it is, I'd suggest replacing the whole thing. With termite damage that severe at one end, you don't know how far into the middle of the remaining portion they may have eaten, so might as well get rid of the whole thing. The hard part is getting the board long enough to fully bear on both sills while being short enough for you to be able to actually get it in place - I'd imagine the original was dropped into those slots from above before the flooring went down.

I would be tempted to cut it to length, then cut it in half. This would allow you to slip each end into the notch for it and have them meet in the middle. Of course, now that it's cut in the middle means it's not going to support much. To fix that, take the left over piece of that 10' 2x10* you bought and sister it across the entire span. Sure, a 5' scab is probably overkill, but you've got the lumber, so why not. I believe that the general rule is about 2' on either side of a split/break, so you're only exceeding that by about 6" so why bother cutting it shorter.

Unfortunately, this will leave the floor boards above not attached to the joist, so you risk them squeaking. Pick up a floor squeak fix kit that includes clips that will screw into the bottom of the flooring, then into the side of the new joist. Putting one on every other floor plank above will probably do the trick. Leave the ceiling open for a week or so to see if that's sufficient, if not, add more.

*The existing joist looks to be rather old and rough finished, as a matter of fact, it looks like much of the lumber in my house. That means there's a non-zero chance that it's actually 2" x 10", not a nominal 2x10 (i.e. 1.5" x 9.5"). If that's the case, make sure you buy a 2x12 as your new floor joist, then notch down the ends to the exact height you need to slip into that pocket in the wall. If you don't, your nominal 2x10 will sit on the bottom of the pocket and not reach up to the floor, or you'll attach it to the flooring, but it won't rest on the bottom of the notch.

Oh, and your nominal 2x12 won't be wide enough to fully fill the pocket, either. That's less of a concern, since you'll be sistering 2 pieces. The 3" bearing surface against the flooring above, as well as the squeak-fix clips, should prevent it from twisting, turning, or "sliding" around in the pocket. However, you could use some 1/2" plywood shims to get a nice snug fit into the pockets, if desired. Cut the plywood to fit and drive the shims home (hammer and a sacrificial scrap of 2x4) after you've got the joist in place. Remember, too, that 1/2" plywood is also a nominal size ranging from about 0.4" to about 0.6" so be sure that you're getting ply on the thicker end of that range. Easier to sand it down to fit than to try to add additional wedges/shims.

I would leave the existing termite damaged joist in place and just sister a 5' new joist to the old one. That way you reduce the risk of damage to the floor above by trying to remove the nails that fasten the floor/subfloor to the joist.

Not the answer you're looking for? Browse other questions tagged joists structural termite or ask your own question.

4
How can I tell how my hardwood floor is attached to my joists below, if there is no subfloor and no visible nails?

1
Replacing a spanned "beam" with a cantilevered beam
0
what size of beam should I use to replace 3 2x8 that is 16 feet?
1
Will supported 2x8s or unsupported 2x12s added to existing joists result in higher rigidity?
2
How should I replace a cantilevered rim joist?
1
Should I reinforce these joists at the central beam? If so, how?
2
Sistering a damaged joist with 2 smaller pieces of wood
4
When sistering a joist or rafter, must the ends of the sister be supported?
1
How to treat joist that has wet rot before sistering a new joist to it
4
Sistering Floor Joists