Outlet has blown twice after circuit worked fine for months

As with many people, I have been working from home since last year. Last fall, I moved my workspace into my basement. The area I'm working in is serviced by a chain of 3 basic outlets, all 15A/125V, coming off a 15A breaker. Here was the setup before things went wrong:

This configuration has been working fine for months.

Yesterday, I plugged my tablet charger into the surge protector (like I had been doing occasionally for the past few months). I heard a light pop and noted my workstation no longer had power.

A few searches later, I learned that outlets CAN overload and die, so I moved on to replacing the outlet. (I also moved the mini-fridge onto a different breaker's chain.)

After replacing the outlet and wiring it just like it was before (grounded also to the box, white wire on top silver screw, black wire on top gold screw), I plugged in the same simple phone charger, and was relived to see power. I reassembled my workstation, attaching only the essentials (less equipment than previously attached) to the power strip. Again, everything came back online. Satisfied, I turned off everything (including the space heater) and called it a night.

This morning, I went to my workstation and started turning things on for work, including the space heater. Everything seemed fine--everything was running, and I heard no pops or zaps. I walked away to get some breakfast, but when I returned there was a distinct smell of burning plastic. The space heater was still running, but my workstation once again had no power.

For now, the whole chain is shut off at the breaker.

So, before I call in an electrician, is there anything I might be missing? I haven't inspected outlet #2 yet, but I'm guessing it's okay based on the working history of the configuration, and that the space heater never stopped working (I'm new to all of this, so of course I could be very wrong).

Extra info from the comments:

I've made a fairly important edit to the info above based on new information from working on it today. The biggest change is that I found I actually have THREE receptacles on the circuit, not four. This likely affects some of the answers below, so watch for edits there, too.

Receptacle #3 The replacement receptacle actually didn't blow out! It's just that the white/neutral line apparently broke while I was hooking it around the screw, because a piece of wire fell off as I was removing it again. I'm surprised it didn't cause a short (and trip the breaker), but it may have been arcing, and I just caught it in time before it did too much damage. I replaced the receptacle with a nicer one anyway, stripped some more white wire and made sure the connection was good and tight. Power is still flowing a few hours later, although the only thing on the circuit at the moment is my workstation on #3.

Receptacle #2 The former home of the space heater had loose screws. I'm really surprised there wasn't a bigger problem there, but everything looked to be in good order (no signs of arcs or burns), so I simply tightened everything and moved on.

Receptacle #1 This one surprised me. This one has been empty for a while, but when I pulled it from the wall, the black/hot wire and its terminal were charred and partially melted! 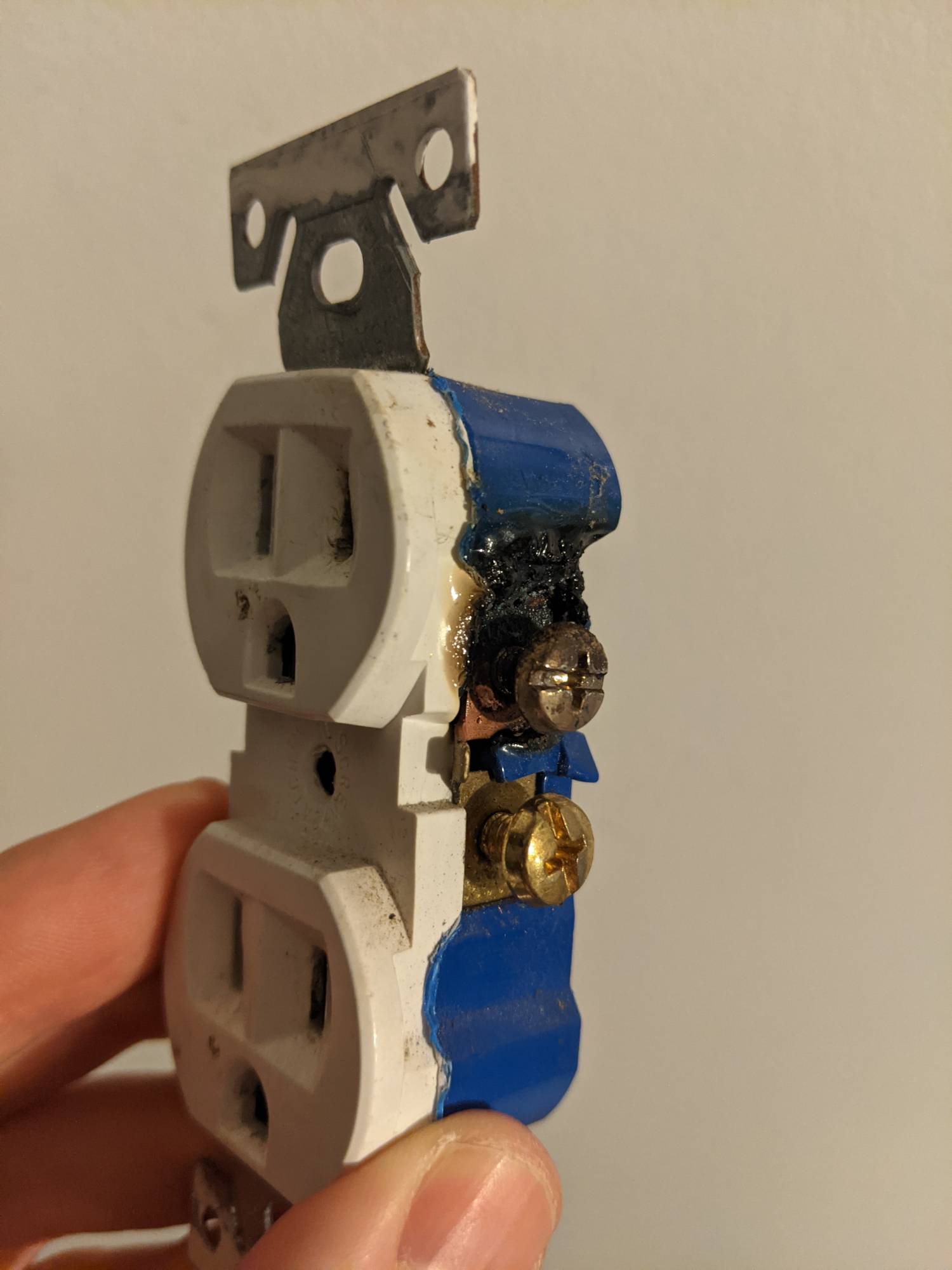 Now, a few years ago, I had a dehumidifier attached here. The dehumidifier suddenly stopped working, and I figured it had expired because it was old and second-hand. A new dehumidifier went on a different circuit, and the receptacle remained empty for a long time, so I never bothered to check it out. Needless to say, I replace this one, too.

(What happened to the original #1?)

It was also empty, so I just assumed it was on the same chain as the others in that area, even though it was on a different wall. I'm glad I checked for current before I started pulling it though, because I only had the other chain's breaker turned off. Boy was I confused when the tester told me it was live... But anyway, still empty, so it was an irrelevant piece of the puzzle. Sorry!

You have an overloaded circuit it may have been fine in the past but the space heater alone is a full load for a 15 amp circuit , add the fridge and when the 2 cycle at the same time the circuit is overloaded even further.

Add the watts for each device like 1500 for the space heater. From 350-700 for the mini fridge already at 100% of a 15 amp circuit capacity further adding the work station there is a serious overload condition especially during startup on the fridge compressor.

On 15 amp circuits failures I have been called in for are almost always the backstabbed or push in connections to the receptacles. You may have fixed 1 but if stabs were used it could fail again at the same point or another point in the chain of receptacles and or lights that could also be on that circuit.

Your breakers are inverse time a dead short they trip immediately but a overload is different a compact breaker will hold 3-5x it’s rated value for ~10 seconds if the overload is only 16 amps it may hold for an hour until it trips depending on the brand and age.

So it is best to reduce the load on the circuit, yes it may have held in the past but overloading a circuit is a good way to have a fire.

There are some obsolete breaker panels out there that have a 60% failure rate and the rate increases with continued cycling. We don’t know if you have a federal pacific stablock panel or Zinsco that are known to have problems especially after repeated overloading.

When load calculations are done electricians are allowed to use 100% for non continuous loads and 80% for continuous. A continuous load is 3 hours or longer is continuous. Motor and lighting loads are always rated as continuous so that mini fridge at 3-6 amps is really rated at 3.75a / 7.5 amps so I hope you can see the overload is the problem and the burned plastic smell may be a overheated backstab connection (even a bad wire nut / screw connection can get hot) when overloaded.

Edit added because fridge was moved; The damage may have happened prior to moving the heater. I will turn the circuit on and use a lamp and check at each receptacle working back to the service panel. The failure is 99% in the last dead one you check or possibly the first live one working from the dead side. It is very rare for the problem to be in the panel but it could be and in all cases with the info we have so far it could be the white or black wire that the connection has failed.

The way these things fail is either with an open connection (i.e. the connection burning out), or ongoing arcing at that connection. Arcing is itself a load, and it makes a lot of heat.

So the next step here is to inspect receptacle 2. Pull wires out of any backstabs, and inspect closely for evidence of arcing on both hot and neutral. And make sure connections are torqued down properly: avoiding the above is why NEC was changed to require torque screwdrivers.