Can I move a joist a few inches left without the ceiling falling on my head?

The ceiling above the stairs in my house (1950s, Minnesota) is too low.

I want to remove the offending joist (the one that's vertical in the picture), cut back the adjacent joists (horizontal) a few inches, then move the joist over and reinstall it.

The stairs go up to the right of the picture. The wall on the left is exterior, as is the wall in the background (obviously, since it has a window).

If I do this work without putting up structural supports, just letting the studs "float" for the hour or two while I reinstall the beam, will the ceiling fall on my head? 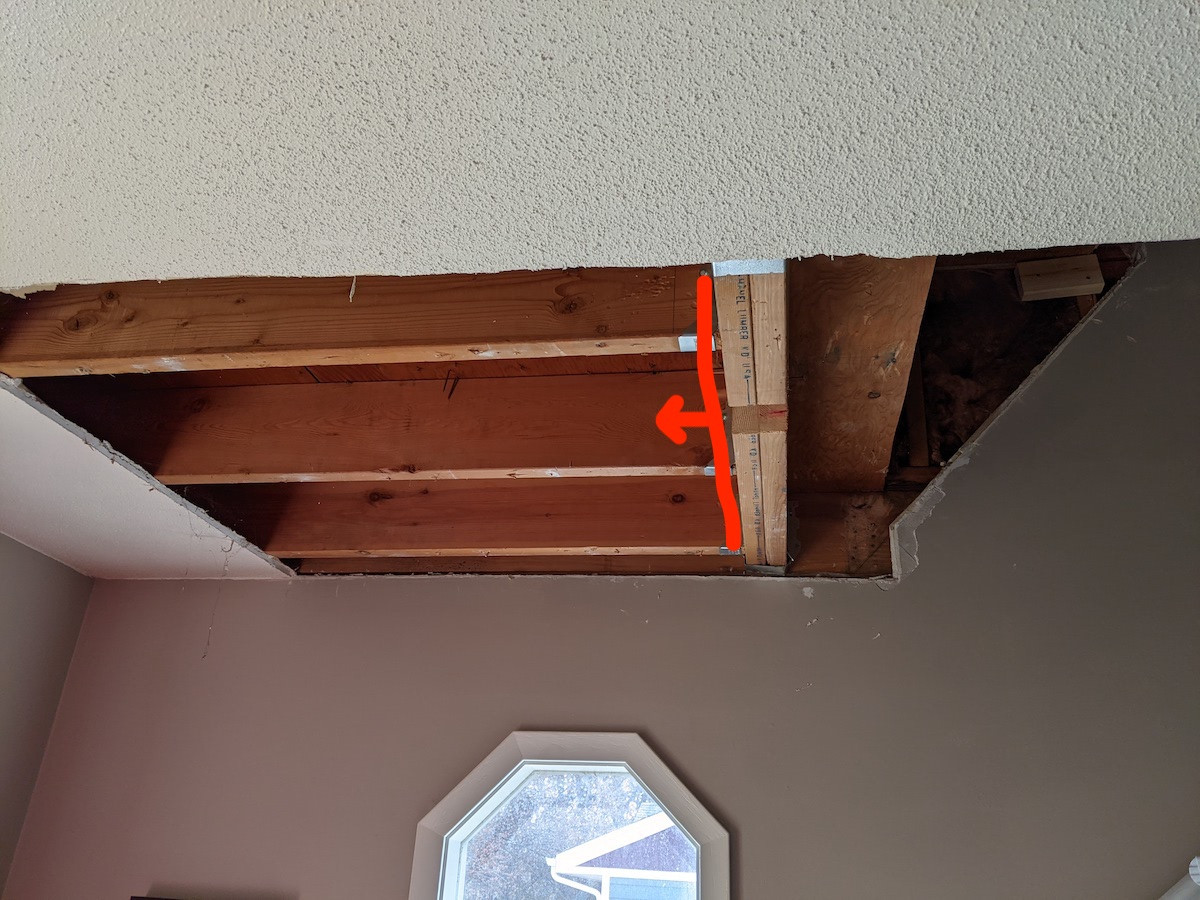 Edit: The floor above is a walk-in closet. Directly above the double joist is the front edge of the "box" that forms the bottom of this little shelving alcove in the closet. The floor above that is the attic which is unused/unfinished, just insulation, and is accessed through a trapdoor on the opposite side of the house. 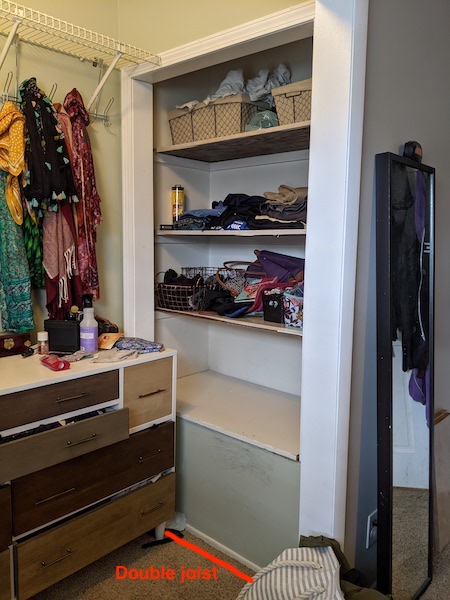 Those joists carry dead/live loads of the closet floor, any walls resting on it and that transfer loads, foot of any attic stairs etc.. There is also a load transferring from the studs you mention via a bottom plate (not visible) onto the joists.

If you remove the joists during work, you have to support the flooring and bottom plate that rests on the joists.

You also have to check what's loading the double rim joist there. What exactely is resting on it?

Even if the load is minimal, supporting the joists will also prevent any temporary deformation that could crack your wall finishings or separate fastened members.

Work on one joist at a time, while supporting the others.

Building a support is easier than you think. If the load is entirely on the perimeter of the space above, you don't have to support the flooring itself (between the existing joists), but you still have to support the bottom plate on which the aforementioned studs are resting.

With support along the perimeter of the space you can remove the joists, cut them, and re-insert them. Again, it's important to check what's loading the double rim joist that shall be move back: stair stringers, wall studs, just flooring etc...?

To provide support you could use two or three vertical 2x6 or 2x4 over the width of the stair case, resting on a flat 2x4/2x6 pressing up against another flat 2x4/2x6. You can cut the verticals slightly over-length (by 1/8") and jam them in until they provide support. Or get a 20ton bottle jack lift.

4
How far can I move ceiling joists up?
1
How can I support a joist length of 9 meters without steel?
1
Installing cable trunking on ceiling without damaging the ceiling paper
1
Can I use a 2x8 for a ceiling joist and rafters on a 16' span?
1
How much can I safely suspend from ceiling joist? Which screws?
0
maximum ceiling joist to beam span without joist hangers
0
Frame a door under or around a beam?
0
Hollow Ceiling Joist? Can joists have side panels?